Around 2,000 truck drivers and 120 trucks have gathered in Bern to protest against government plans to raise the tax on heavy goods vehicles in 2008.

Protestors at the rally, organised by the Swiss road hauliers association, arrived with 150,000 signatures on a petition called "No to this attack on our wallets".

Environmental organisations and railway unions had recently called on the government to uphold its promise to raise the tax. The government said at the beginning of this month it would.

The truckers association launched the petition in April calling for the new rate to be levied only on foreign trucks transiting Switzerland. It said the big losers are Swiss consumers who have had to foot the bill of rising transport costs.

Carlo Schmid, a senator for the centre-right Christian Democratic Party and head of the road hauliers association, said the success of the petition, which will be handed over to the government on Tuesday, showed that the truckers were not alone with their demands.

Why else, he asked, would diverse sectors such as trade associations and Swiss farmers have supported the petition?

Protestors in Saturday's rally in the Swiss capital also called for emergency measures for the north-south axis.

On May 31 rock falls on the motorway leading to the Gotthard tunnel forced the temporary closure of the route, Switzerland's main north-south axis, which is expected to remain shut until at least the beginning of July.

The truckers said conditions on the San Bernadino Pass, the main detour route, had become unacceptable.

The road pricing system for heavy vehicles came into effect on January 1, 2001. All Swiss and foreign vehicles weighing at least 3.5 tons must pay the tax to use the road networks in Switzerland and neighbouring Liechtenstein.

The road tax is a key element of Switzerland's transport policy aimed at reducing heavy vehicle crossings of the Alps to 650,000 by 2009. In 2003, there were over one million such transits, which was a drop of eight per cent compared with 2000.

But road hauliers argue that the tax has not had the desired effect, nor will it have when the rate is increased in two years' time.

The coalition of associations in favour of the tax argue that Switzerland would have a tough time financing the building of its new transalpine railway tunnels without the tax.

Road tax revenues currently amount to around SFr1.2 billion annually, and are expected to go up to SFr1.33 billion as of 2008.

The European Union agreed to allow Switzerland to include the road tax in a bilateral agreement on transport, in exchange for the Swiss allowing heavier trucks (from 34 to 40 ton) to transit the country.

This last point, according to the Alpine Initiative, the Swiss Transport and Environment Association and Railway and Transport Employees Union, has been an incentive for road hauliers and therefore the higher tax is necessary.

The people's initiative "for the protection of the alpine regions from transit traffic" was handed in in 1990 with 107,570 signatures.

The Alpine Initiative calls for freight to be transferred from road to rail as well as a stop to new roads being built in the Alps.

The initiative was accepted by 51.9% of voters. It has subsequently been enshrined in the Swiss constitution.

A total of 1,255,000 heavy goods vehicles crossed the Swiss Alps in 2004.
The law stipulates that by 2009, two years after the opening of the Lötschberg base tunnel, this figure will be reduced to 650,000.
The Gotthard axis currently absorbs over three-quarters of the heavy traffic. 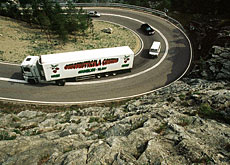 Introduction of road tax to be kept on course

Environmental organisations and railway unions have called on the government to uphold its promise to raise the tax on heavy goods trucks in 2008. 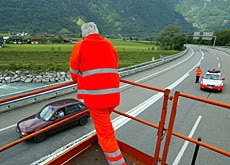 Businesses in the southern canton of Ticino are facing an economic slowdown following the closure of the Gotthard route, Switzerland's main ... 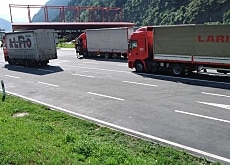 Switzerland could reduce the volume of heavy goods traffic crossing the Alps by introducing a new system of auctioning transit rights, experts ...