Swiss star architect Peter Zumthor has lost a battle for ownership of the spa and hotel complex in Vals, eastern Switzerland, which he designed.

The commune, which owns the complex, decided on Friday night to sell it to 35-year-old property developer Remo Stoffel.

The thermal baths, a maze of pools enclosed by concrete and stone mined from the surrounding hills, were opened in 1996 and attract visitors from far and wide. The commune of Vals decided to sell the complex as it could not afford the necessary investment in the hotel.

The people of Vals took the decision to sell to Stoffel after a long and heated discussion. Three-quarters approved the sale of the complex. With 287 votes for Stoffel’s project, and 219 for that of Zumthor, the result was clearer than observers had predicted.

“Seventy-five per cent in favour is a good result,” Vals businessman Stoffel commented.

Stoffel’s group offered SFr7.8 million ($8.49 million) for the spa and hotel, and pledged to invest SFr50 million in hotel renovations as well as to build a multi-purpose hall. Zumthor had made a similar offer.

Local residents were divided over whether to back the thermal baths creator, Zumthor, or local businessman Stoffel, with many anxious to make a break between Vals and the architect. 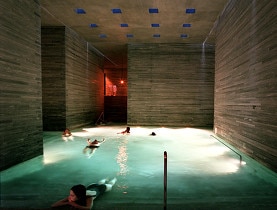 Swiss architect Peter Zumthor has won the 2009 Pritzker Architecture Prize, the most prestigious award in the field. The Pritzker jury of ... 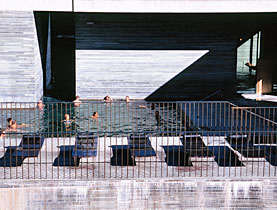 The alpine chalet may be one of Switzerland's most enduring images but a new building could soon take over as its architectural icon. At 154 ...

Star architect fears for his famous masterpiece in Vals. The remote alpine village of Vals in the eastern Swiss canton of Graubünden rose to fame ...