Fifty years ago today, a nuclear meltdown occurred in Switzerland’s first experimental nuclear power station. Built in an underground chamber in Lucens in the western part of the country, it was the site of the worst nuclear accident in Swiss history.

The plant was opened in 1962, with the aim of not only producing energy, but also allowing Switzerland to develop a reactor bearing the “Made in Switzerland” label and enabling experiments with nuclear energy.

But these plans were pushed aside when disaster struck in the plant’s reactor cavity on January 21, 1969. A pressure tube burst which created a power surge leading to the reactor malfunctioning and an explosion. Luckily, a member of staff who was scheduled to be working on the reactor at the time was found safe and sound elsewhere. The plant’s underground design also prevented people and the environment from being harmed.

The accident’s severity registered at 5 out of a possible 7. The concentration of leaked cooling gas that was behind the door of the reactor cavity was lethal. It wasn’t even possible to measure the radioactivity because it was above the maximum level on the measuring instruments.

But the reactor cavern was not completely sealed: the radioactivity spread to the control room 100 metres away. In the machine cavern closest to the reactor, a team involved in shutting down the turbine had been exposed to radiation. A witness report said that since the decontamination showers had been out of order, the workers had to shower in a temporary facility without hot water.

The government ordered an inquiry into the incident and a report was eventually published ten years later. The Swiss Association for Atomic Energy found there had been no major negligence on the part of the plant’s managers. The cause of the incident was corrosion in a pressure tube, brought about by humidity.

Swiss voters have thrown out a proposal to close the country’s five nuclear power plants after 45 years in operation. 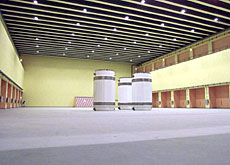 The authorities have begun removing the last radioactive waste from the country’s oldest nuclear power station in Lucens, which was shut down ...

Contaminated Visit to the core of a Swiss nuclear plant

While I try to wash off any potential trace of contamination, security is screening my underwear. The life of a journalist in the field can be ...