The Swissmakers is one of the most successful Swiss films of all time. A satire on immigration, writer-director Rolf Lyssy talks about why it was so popular and why it stands the test of time. (Carlo Pisani, swissinfo.ch)

It is estimated that when The Swissmakers came in cinemas in 1978 one in every five Swiss watched it, making it one of the most successful Swiss films ever in terms of number of viewers.

Lyssy, who turned 80 at the end of February, spoke to swissinfo.ch from his home in Zurich. He looks back at how the fictional film poked fun at the way authorities treated foreign nationals who were trying their luck at naturalisation, and says the film is still topical in the present dilemmas posed by immigration.

Inspired by a practice that still holds true to this day, the film follows two plain-clothes police as they investigate the everyday lives of foreigners who have applied for Swiss citizenship. The foreigners being shadowed and questioned include a German psychiatrist, a charming Yugoslavian dancer and an Italian pastry maker.

The two policemen are the uncompromising Max Bodmer and his young, new sidekick Moritz Fischer.

Lyssy’s own mother was a Russian Jew who escaped Nazi Germany by marrying a Swiss. He sees in Bodmer and Fischer the two enduring, opposing world views on migration. On one side, there are the Bodmers who assume the worse about each person and have rigid ideas on what a person needs in order to fit in. On the other hand, the Fischers who are more open to change.

Although Lyssy believes the two characters still are valid today, he says the people who are seeking refuge in Switzerland today have changed, with cultural differences posing new challenges to Swiss society.

Citizenship Why the sudden interest in Swiss passports?

Demand for Swiss passports jumped 19% in 2015 and is expected to remain high this year amid immigration uncertainties and stricter application rules.

A study based on past Swiss citizenship decisions concludes that naturalisation accelerates political integration. The researchers suggest that ...

Facilitated naturalisation for spouses of Swiss nationals used to be seen as the easy route to citizenship. However the integration assessment has ... 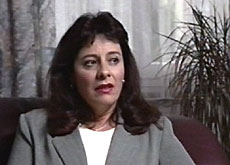 Lifespark, the Swiss organisation devoted to finding pen pals for death row inmates in the United States, is this year marking its tenth anniversary.