Despite proving more resilient to the financial crisis than conventional markets, Islamic finance is struggling to reach its full potential, a conference has heard.

Experts gathered in Lucerne last week agreed that much work still has to be done to bridge the gap between the fledgling Islamic financial sector and Western markets. One Swiss expert said the terms Islamic and sharia were hindering the process.

Until recently, there did not appear to be a particularly compelling case for Islamic banking and insurance services for non-Muslim clients. But the out-performance of Islamic products against conventional markets during the financial crash has generated more interest.

“The failure of toxic products [including mortgage-backed securities] during the financial crisis has allowed Islamic finance to gain momentum,” Marc Chesney of Zurich University’s Swiss Banking Institute told the conference on Friday.

Many investments in Islamic finance did take a tumble during the crises years of 2008 and 2009. But sharia laws, which both forbid speculation and demand that all parties share risk as well as profit, stripped out most of the more dangerous toxic products from client’s portfolios.

Such a product might be expected to appeal to many investors who were burned during the crisis or who are now outraged at bankers’ bonuses and perceived greed.

But Fares Mourad, head of Islamic finance at the Swiss bank Sarasin, pointed out that the marketing of this product has so far won few converts in the Western world. “The terms ‘Islamic’ and ‘sharia’ have helped it develop and reach this stage, but it is now hindering the next stage of reaching Western clients,” he told swissinfo.ch.

Recent moves to ban minarets in Switzerland or the wearing of religious headscarves in France, hardly point to a climate willing to accept a form of finance based on Islamic sharia law, the conference heard.

In addition, the introduction of Islamic finance would also require an overhaul of tax laws and regulations.

But even in Muslim countries Islamic finance has far less penetration than the conventional Western model. The conference heard that only around 15 per cent of the market in Malaysia invests its money in Islamic products despite the fact that the country is seen as the standard bearer of sharia-compliant products.

Islamic finance is still in its infancy and is evolving differently from the Western model, making it more difficult to gauge for investors. One problem is that financial products must be approved by Muslim scholars, and interpretation of sharia law varies between individuals.

According to one respected Bahrain regulatory authority, which surveyed the Islamic bond market last year, some 85 per cent of products were actually un-Islamic.

Perhaps little wonder that even Swiss private banks, which pride themselves on their innovation and have far-reaching exposure to Middle Eastern clients, have so far failed to develop their own Islamic products to any degree.

One exception is Bank Sarasin, which claims to be the only private bank in Switzerland with a complete in-house Islamic offering. But Sarasin’s expert Mourad believes the market for Islamic finance will prove too lucrative a lure for other banks before long.

“It lies in the nature of Swiss people to have a look first, evaluate, reflect and then take a decision,” Mourad told swissinfo.ch. “Islamic finance is a new business, but it is only a question of time before we see other private banks in Switzerland offering an A to Z service.”

However, attracting Western clients could prove more difficult for the Islamic finance sector. Not only could the term ‘Islamic’ put off investors, the model would now have to compete with a rapidly evolving sustainable finance sector that eschews ethically questionable products or big risks.

Socially responsible investing (SRI) is a growing business in Western markets and is seen in part as an antidote to the risky and greedy practices that led to the crisis. For the time being, both SRI and Islamic finance must occupy a similar area, but remain apart, according to Mourad.

“Islamic finance and SRI take a slightly different approach, but both are aiming for wealth preservation and sustainability for the benefit of humankind,” he said. “Both models are looking over the fence and borrowing elements from each other.”

In the meantime, Mourad and many other financial experts will continue with their efforts of trying to construct bridges between Islamic and Western finance in the hope of finding a structure that can join the two in a sustainable way.

Sharia law prohibits the payment or charging of interest – called usury in the Koran. Products such as sukuk bonds get around this employing a system of sharing capital gains.

The United States and Britain recognise that certain capital gains from Islamic products are tax exempt, but most European countries do not follow this principle.

Investments are limited to products sanctioned by a fatwa – an edict of approval from an Islamic scholar. Products associated with gambling, alcohol, tobacco, weapons, pornography and pork production are outlawed.

However, there remains confusion about what financial products and services can be offered, with sharia scholars presenting different interpretations of the law.

In 2006, Faisal Bank became the the first Islamic financial institution to set up business in Switzerland.

Friday’s Islamic finance conference was arranged by Lucerne University, Zurich University’s Swiss Banking Institute and the Centre for Religion, Economics and Politics – a joint initiative of the universities of Lucerne, Zurich and Basel.

Switzerland faces a bigger threat from the developing private banking system in the Middle East than reaction to the minaret ban, according to one ... 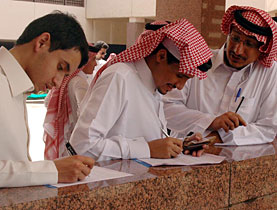 Plans by Arab partners to set up an Islamic private bank in Switzerland have highlighted a largely unexploited market of Muslim wealth based in ...