Shareholders in the world’s largest employment services agency, Adecco, have voted to overhaul the board of directors in a bid to restore market confidence.

The vote at Tuesday’s annual shareholders meeting in Lausanne was in response to accounting problems earlier this year that cost investors billions of dollars.

In its first move, the new board elected Adecco’s two main shareholders, Klaus Jacobs and Philippe Foriel-Destezet, as co-chairmen.

Adecco was formed from the merger of Swiss and French staffing groups Adia and Ecco, which were run by the two men.

During the flap over Adecco's accounts, which dented investor confidence, the media and analysts had speculated that the two men differed over group strategy.

Their appointments did not convince analyst Rolf Kunz at Zurich Cantonal Bank.

“One positive is that they both have knowledge of staffing… much more than the other board members. But the main negatives are they are still fighting and the chairman is not independent,” Kunz commented.

Shareholder Pierre-Alain Lüginbühl was also sceptical about the move.

“It’s always a mistake to have a co-chairmanship. Plus it is known that they haven’t got on since the beginning of the merger so I don’t think it is a good solution,” he said.

German executive Dormann, credited with turning around Swiss-Swedish engineering concern ABB, had been favoured by many to become chairman, as was Mer. The two were reportedly approached but turned it down.

Adecco’s outgoing executive chairman, John Bowmer, told shareholders that the company had learnt its lesson over the accounting issue.

“I now hope we can put this unfortunate episode behind us. We have learnt our lessons and Adecco will keep improving its internal processes,” he said.

“Adecco has emerged from this difficult experience as a stronger company. Adecco is following the right strategy. It has a bright future,” he added.

After twice delaying publishing its 2003 accounts, amid fears of a financial scandal, Adecco on June 1 announced its figures, which revealed little financial impact from bookkeeping problems.

However, investigations into the accounts cost the company an estimated €100 million (SFr152.7 million) in fees from auditors, lawyers and consultants.

In a related development, Adecco said on Monday that the United States Justice Department had issued a grand jury subpoena for “a variety” of the group’s records.

But according to a regulatory filing, the company has delayed its response while it provides information to the US Securities and Exchange Commission (SEC).

Both the SEC and the Swiss Federal Banking Commission have opened their own investigations into the delaying of the 2003 accounts.

Adecco said in the filing that the Banking Commission in Bern was looking at trading in Adecco securities before the January announcement of accounting problems.

And it said that the Swiss stock exchange (SWX) was conducting a formal investigation into possible violations of rules on “ad hoc publicity”, which means disclosure of price-sensitive information.

The group has also been hit with lawsuits relating to its accounting problems, with Monday’s filing citing eight class-action suits in the US against the company and some of its former and current officers and directors.

The Jacobs family holds 11.8% of the shares in Adecco, while Foriel-Destezet has an 18.3% stake.
The accounting saga began on January 12 after Adecco uncovered irregularities centred on its North American unit.
Four days later, the company’s chief financial officer and the head of the North American unit stepped down.

Adecco shareholders have voted to revamp the board of directors after investors lost billions of dollars in the wake of accounting problems.

The accounting issue has been seen as the biggest corporate public relations disaster in Europe this year. 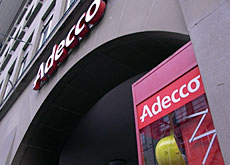 The world’s largest employment agency, Adecco, has again delayed the release of its 2003 results, saying an independent audit has yet to be completed. 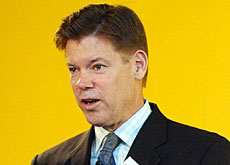 Troubled employment agency Adecco, which has been damaged by accounting woes, has appointed Jim Fredholm as its new chief financial officer. ... 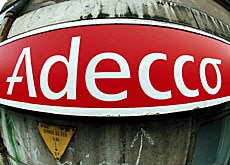 Adecco revamps board as profits fall

Accounting woes at the world’s largest job services company, Adecco, have eaten into its first-quarter net income, which fell 53 per cent to €30 ...