Switzerland says a comprise solution has been reached with neighbouring France to settle a tax dispute over the tri-national airport of Basel-Mulhouse.

Meeting in the Swiss resort of Davos on Thursday, Foreign Minister Didier Burkhalter and his French counterpart, Laurent Fabius, signed a joint statement outlining the principles for a bilateral treaty.

The agreement in principle foresees that international air transport operators will continue to be subjected to Swiss tax law, while other companies are to be taxed under French law.

“This is indeed a very important step. The partners are thus committed to continuing their efforts to arrive at a definitive and long-term solution guaranteeing the future of the airport and a large number of jobs depending on it,” Burkhalter said at a news conference on the sidelines of the annual meeting of the World Economic Forum in Davos.

A formal accord is to implemented by next year, according to a foreign ministry statement.

EuroAirport Basel-Mulhouse-Freiburg is located on French soil but has been operated as a joint public sector body with Switzerland since 1949.

In total, about 6,000 people are employed by the airport, more than two-thirds of whom work for around 60 Swiss companies.

A row over labour issues between both countries at the airport’s Swiss customs sector was resolved in 2012.

The aviation services company Jet Aviation will slash 300 jobs from a total of 1,600 at Basel's EuroAirport by the end of the year, a company ...

The figures speak for themselves. Switzerland’s airports are essential for the economy of the landlocked nation, with an impact estimated at ...

By Simon Bradley (with input from Matthew Allen) 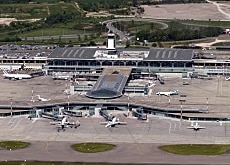 The Basel-Mulhouse airport - which was set up in the shadow of the Second World War - has been celebrating its 60th anniversary. The only ...