The Swiss government has been accused of hiding surveillance systems in cuckoo clocks and then giving them as official gifts to at least 30 embassies.

The foreign ministry has yet to comment officially on the claims, made in United States diplomatic cables released last week by the WikiLeaks whistle-blowing website.

The alleged bugging came to light in cables sent in September 2006 from the US embassy in Bern to the US State Department.

In it, an unnamed official expressed security concerns about the cuckoo clock – a pendulum-driven “Chalet” model with music box – which had been presented to the ambassador the previous month as part of Swiss National Day celebrations.

“The latest addition to the living room is proving to be a good conversation piece, but I’m not sure we should be holding conversations around it,” the official wrote on September 14.

“The bird came out at midnight yesterday and I swear something flashed.”

A second wire followed two days later. “This is explosive! The cooker [sic] clock is bugged! Camera and audio device. Who would have thought the Swiss would do something like that??”

The official went on to explain how doubts were raised when, at midday on September 7, 2006, the music box got jammed at the end of Edelweiss, one of the most common melodies in cuckoo clocks and music boxes.

“The ambassador likes to sing along, but the final verse wouldn’t end – it was all ‘Bless my homeland forever, forever, forever...’. We got it down, opened it up and couldn’t believe it when we found a [expletive] surveillance system inside!”

The employee didn’t think any sensitive material had fallen into Swiss hands, although he admitted that audio of the ambassador singing along to Oscar-winning musical Dreamgirls “would probably impact his reputation negativewise”.

It turns out that the US embassy isn’t the only recipient of Swiss generosity. An investigation by a Zurich news magazine revealed that at least 30 embassies had been given similar clocks at official events on August 1, 2006.

A spokeswoman for the British ambassador told swissinfo.ch they had been in contact with their US counterparts and had removed the clock from the dining room “as a precaution”.

The Australian consulate in Geneva confirmed it had also mounted the timepiece – “but in the dunny [lavatory]”. “I doubt your spooks [spies] would have picked up much of diplomatic value,” an official said.

Other embassies known to have accepted a clock include those of Germany, Norway, Japan, Chile, Mexico and the island of San Serriffe.

The Austrian consulate apparently thanked the Swiss for the gift but politely turned it down. “We get enough pseudo-Bavarian tat from the Germans,” said a spokesman.

The Swiss government has not officially responded to the allegations, but a foreign ministry employee, speaking anonymously because he was not authorised to talk to the media, told swissinfo.ch that the rewards hadn’t been as great as they had hoped.

“The Finnish ambassador gave the clock to his daughter, who must be about four years old. She kept screaming whenever the bird appeared and eventually it was put in a cupboard,” he said. “It wasn’t a wild success.”

He added they had learnt that the French consul’s wife had an allergy to rhubarb, the Irish were thinking of resurfacing their tennis court and the Brazilian ambassador snored – “either that or he keeps an asthmatic donkey in his bedroom”.

The only mildly interesting information was that the foreign ministry source would neither confirm nor deny that the Italian embassy had hosted so-called bunga bunga parties.

Exchanging presents at a diplomatic level is a common occurrence.

The foreign ministry official told swissinfo.ch he remembered the Russian consul to Bern giving his Swiss counterpart some matryoshka dolls.

“You know, those painted wooden things where you open one up and there’s another smaller one inside. There must have been about ten of them," he said.

"The Russian said it was traditional to put one in every room – and preferably not near any electrical appliances...”

Although cuckoo clocks are widely believed to be a Swiss invention, they actually originated in the Black Forest region of southern Germany in the mid-18th century.

The “chalet” style originated at the end of the 19th century in Switzerland, when they were highly valued as souvenirs.

There are currently three basic styles: Black Forest chalet, Swiss chalet (with two types, the "Brienz" and the "Emmental") and the Bavarian chalet.

Commonly found in the Bavarian chalet is a Swiss music box. The most popular melodies are "The Happy Wanderer" and "Edelweiss”.

Along with the common projecting cuckoo bird, this style of clock may also display other types of animated figurines, including woodcutters, moving beer drinkers and turning water wheels. Some "traditional" style cuckoo clocks feature a music box and dancing figurines as well.

Orson Welles took a swipe at the Swiss in the 1949 film The Third Man after a ride on the Ferris wheel in Vienna's Prater Park.

In a memorable quote, he said: "In Italy, for 30 years under the Borgias, they had warfare, terror, murder, bloodshed – they produced Michelangelo, Leonardo da Vinci and the Renaissance. In Switzerland, they had brotherly love, 500 years of democracy and peace, and what did they produce? The cuckoo clock."

Scriptwriter Graham Greene conceded this was not his invention but rather Welles's contribution to the script.


(NB: These allegations were unearthed on April 1...), swissinfo.ch 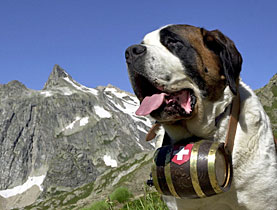 swissinfo has spoken to many movers and shakers over the past year, however few personalities are as well recognised as Santa Claus. In an ... 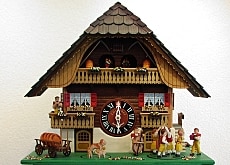 For many tourists the ultimate Swiss souvenir is a cuckoo clock, and the number of shops selling them in all the big cities and resorts won't ...

Assembling Swiss watches in the Jura mountains. A glimpse inside the workshop of one of the most famous Swiss watchmakers, Audemars Piguet.

Lötscher cuckoo clocks. Founded in 1920, Lötscher Ltd. is billed as the only genuine Swiss brand of cuckoo clocks in existence today. All of the ...