After years of negotiations, Payerne’s regional civilian airport and future business aviation hub is starting to take shape. The first stone of an airport building in northwest Switzerland has been laid.

“It’s a day of celebration and joy,” Fribourg businessman Damien Piller told reporters at a ceremony to mark the start of construction of the main airport building on Monday. Work should last 18 months.

Piller has been one of the driving forces, alongside the commune of Payerne, cantons Vaud and Fribourg and the Swiss air force, behind the transformation of the regional military airport into a civilian facility.

The new airport building will welcome Payerne’s first partner, the business aviation firm Speedwings and seven jets. New office space will be created to attract other firms. It is hoped that the airport will generate some 1,500-2,000 jobs.

Payerne is focusing solely on business aviation and not on bigger tourist flights. The airport is aiming to increase the number of civilian flights from 400 a year to 8,400. At the end of December 2007, the Swiss government authorised Payerne military airport to open to civilian flights. But strict limitations have been placed on the number of private jet and commercial flights due to local concern over noise pollution.

“We have made sure things are very pragmatic. With Speedwings we know what we are talking about and we are perfectly clear about the business and we know that the model will work and matches the needs of different clients. It’s an act of faith in regional development. Geneva’s Cointrin International Airport is saturated and we are sure that over time our objectives will be met,” Piller declared.

Geneva Airport, which is located 120 kilometres southwest of Payerne, is a victim of its own success. The number of passengers using the airport has grown from 7.7 million in 2000 to 16.5 million in 2016. Work is continuing to expand and modernise Geneva’s infrastructure with CHF150 million ($155 million) a year being invested until 2030.

Switzerland’s main airport of Zurich is going from strength to strength, setting a new daily record.

The Swiss army is investing millions to renovate the runway at Sion Airport ahead of its wider use by civil aviation. The Swiss air force is due ...

Geneva is Europe's second busiest airport for business aviation but its traffic in the sector is declining. 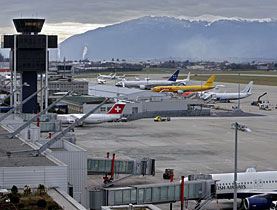 Is Geneva airport a victim of its own success?

Geneva airport, with its one runway and soaring passenger figures, must re-think its future or risk reaching saturation point by 2012, warns a ...