The Swiss “bank” that sparked criticism after closing down the account of WikiLeaks founder Julian Assange faces more years operating in limbo without a licence.

PostFinance, the financial arm of Swiss Post, has squeezed the concession of future life as a separate company. But it must continue to sub-contract many financial services while it remains a state-run monopoly.


The rather staid world of Swiss post office banking accounts and insurance offerings has been far from mundane in recent weeks.

Earlier this month PostFinance announced it had closed down Assange’s account after he allegedly gave false details about where he lived. The action, carried out just as WikiLeaks was releasing sensitive data into the public arena, drew allegations of government interference.

The claims drew a swift denial from the Swiss authorities that control Swiss Post, but the communications ministry will still conduct an investigation into the legality of the account closure.

Swiss freedom of information watchdog group, the Pirate Party, has heaped on the pressure by demanding a legal probe into the allegation that PostFinance violated client confidentiality laws.

The Pirate Party states that “the account has been closed without a clear legal process”. Furthermore, PostFinance may have broken the law when it “released the name of a customer and the details of the business relationships with this customer through a press release”.

Founded in 1906, PostFinance has enjoyed a boom since the arrival of the financial crisis as customers flocked to the safe haven of the conservative institution. It attracted 126,000 new customers who deposited an extra SFr20 billion ($21 billion) in cash last year, swelling total assets to SFr73.3 billion.

The boom in business created an extra 153 jobs in 2009 and a further 190 this year. In the past nine months total deposits have risen to SFr83 billion (91,000 new customers) while profits have climbed 29 per cent to SFr456 million compared with the same period in 2009.

But PostFinance still endures the unwanted nickname of “the bank that is not a bank” in Switzerland. Efforts over the past decade to obtain a full banking license have foundered on the fact that it is state owned.

“Swiss banks have no problem with competition and that would include competition from any future post office bank,” Swiss Bankers Association spokesman James Nason told swissinfo.ch.

“However, we insist on a level playing-field. That means a post office bank would have to be fully privatised and not be state-owned or partly state-owned and it should not profit from a state guarantee.”

Until it has a banking license, PostFinance can only offer deposit and savings accounts and simple financial products, such as funds, on its own. It has to strike cooperative deals with other institutions, such as the Valiant Bank, to sub-contract mortgage and business loans services.

PostFinance argues that these restrictions force it to invest clients’ money abroad in volatile capital markets.

“We have seen from the last financial crisis that these markets are far riskier than using deposits to issue mortgages in Switzerland and credit to small and medium-sized enterprises,” PostFinance spokesman Marc Andrey told swissinfo.ch.

While having the banking licence door slammed in its face once again last week, PostFinance did at least draw some concessions. Parliament has approved a plan to spin off PostFinance from Swiss Post as a separate company that will from 2012 come under the supervision of Swiss financial regulators rather than government ministries.

However, for the time being at least the only shareholder in the new operation would be the Swiss Post parent company which is itself owned by the state.

The option of privatising PostFinance remains an unknown and is tangled up in the ongoing and politically divisive issue of whether or not to liberalise the entire postal service in Switzerland.

The Swiss Business Federation (economiesuisse) is under no illusions about what should happen. The lobby group is already concerned that Switzerland is lagging behind European Union neighbours that will start dismantling postal monopolies from the beginning of next year.

“Switzerland will be in isolation as all the surrounding countries will have open postal markets. This is a bad sign for customers and for the economy,” economiesuisse spokesman Dominique Reber told swissinfo.ch.

To add further confusion, a completely new idea for the future of the Swiss postal service, released in September, may throw the issue to a nationwide vote within the next three years.

The initiative, supported by trade unions and left-leaning political parties,  calls for a Post Bank with a full licence to provide funds from its profits that would be used to keep open post office branches throughout the country that are currently faced with closure.

PostFinance is a business unit of Swiss Post set up in 1906.

In 2003 it started offering private mortgage loans by sub-contracting the service to other banks and followed that a year later with loans to small and medium-sized businesses, also though other banks.

Under this sub-contractual arrangement PostFinance markets and sells loans while the partner institution bears the credit risk and overall responsibility for risk management.

In the first nine months of 2010 PostFinance recorded profits of SFr456 (SFr448 in the same period last year), increased customers to over four million (3.88 million) and deposits to SFr83 billion (73 billion).

By contrast Swiss Post has suffered in recent times, having to close down 900 regional post offices with another 400 threatened.

A year ago, Swiss Post went through a massive management upheaval after its director-general Michel Kunz was fired, prompting the resignations of several board members, including the chairman, Claude Béglé.

Swiss asylum experts have cast doubt over the success of the possible request for political asylum revealed by Julian Assange, the embattled ... 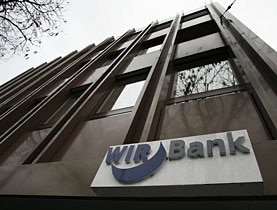 An alternative currency, created to keep small companies afloat during the 1930s recession, is still thriving as it marks its 75th anniversary ...

Flavian Kippel manages and runs all by himself one of the smallest banks in Switzerland, the Spar und Leihkasse in the village of Leuk, in the ...