The Caux Initiatives of Change Foundation, formerly Moral Rearmament, is celebrating its 70th anniversary. swissinfo.ch looks at an international evangelical and anti-communist movement which has left its mark on Swiss conservatives – both before and after the Cold War.

It was during the first half of the 20th century, when the West was at war and in crisis, that an American evangelist had an idea that would develop into the Moral Rearmament movement.

Caux Initiatives of Change Foundation A force for mediation

Since setting up shop in Caux, above Lake Geneva, in 1946, the Moral Rearmament movement has been working to rebuild Europe by bringing together ...

Frank Buchman (1878-1961) was convinced he had the solution to saving the world from the torments it was going through. In the 1930s, he and his followers founded the Oxford Group, which played a role in the creation of Alcoholics Anonymous.

But Buchman, a man with conviction and Swiss roots, didn’t plan on stopping there. Faced with what he saw as the vices of capitalism and devil-led projects of atheists, he stressed the need for a “moral rearmament”. In 1938, that became the official name of the movement launched by the Oxford Group.

In a book devoted to this movement, the US historian Daniel Sackexternal link wrote: “Moral Rearmament sought to change the world by changing human nature, even in political and economic arenas, not through rational persuasion or logical argument but through storytelling.”

This resonated throughout Europe and the world. In Switzerland, almost 30 political conservatives joined the movement. The political positions of the Swiss members of Moral Rearmament reflected the debates among Swiss conservative parties.

“The rise of fascism and communism scared a lot of the world. And a minority of the Radical Party [the largest party on the right at the time, holding a majority in the Swiss government] questioned the concept of parliamentary democracy, all the while asking themselves whether it was necessary to reform capitalism. That was where some people got the idea of finding an authoritarian solution for Switzerland.”

In the second half of the 1930s, this idea was spread with a certain success in Switzerland by the ultra-Catholic aristocrat Gonzague de Reynold, who worshiped the memory of António de Oliveira Salazar, ruler of Portugal from 1932 to 1968. In 1933, Salazar installed the Estado Novo, or Second Republic, an authoritarian, conservative, Catholic and nationalist regime which was overthrown in 1974.

“Salazar was a model for a soft Swiss fascism,” said the leftwing historian Hans-Ulrich Jost, adding that this included Protestant conservatives.

For some on the political right it was a question of defending Switzerland’s sovereignty in the face of Nazi Germany, while bearing in mind the numerous authoritarian regimes in Europe which were stamping a new European order – actually a period of destruction and massacre.

This provokes a reaction from Olivier Meuwly. “These associations make certain historians on the far left fantasise – not so much about Moral Rearmament but the Mont Pelerin Societyexternal link, seen as a global conspiracy to establish the reign of money,” he said.

The Mont Pelerin Society, which would play a founding role in the promotion of the neo-liberal economy, was founded in Caux a year after Moral Rearmament. They are geographical neighbours, but Hans-Ulrich Jost sees another similarity.

“The Mont Pelerin Society defended the same values as Moral Rearmament but without the religion. It had been founded by the economist Friedrich Hayek and his colleague Wilhelm Röpke, who in 1942 launched a moral appeal in the Neue Zürcher Zeitung for a renewal of Switzerland centred on individual and economic liberty with a harnessed state without a social policy.”

“After the war, all the slightly posh conservatives were in Moral Rearmament, a network which had a certain impact on all those associations which were looking to have an influence on politics and the army by targeting the elite,” Jost said.

This view is shared by a former official in the movement. “I went to Caux for the first time when I was 18 or 20, at the beginning of the 1960s,” Jean-Pierre Méan said in an interview with the Protestant News Agency in 2010.

“The message at the time – as far as I understood it – consisted above all of mobilising Christian values against communism. A lot of effort was spent on the leaders of third-world countries so that they didn’t turn to communism when they gained independence. This approach didn’t interest me.”

The reason that Méan eventually rejoined the Caux Initiatives of Change Foundationexternal link in the 2000s stems from the change in direction taken by Cornelio Sommaruga, who took over Moral Rearmament, as it was still called, when it had lost a lot of its 1970s aura.

Highly regarded in Switzerland as well as within the international organisations based in Geneva, Sommaruga humanised and embodied – like no one before him – the presidency of the International Committee of the Red Cross (ICRC), a post he held from 1987 to 1999.

Under his direction, the title Moral Rearmament, which had become cumbersome, was dropped and the organisation became the Initiatives of Change Foundation. The original spirit intended by Frank Buchman has been preserved, minus the most ideological trappings.

What do you think? How can society today best cope with a world in crisis?


Translated from French by Thomas Stephens

ICRC Are the 'rules of war' in crisis?

The Geneva Conventions form the heart of International Humanitarian Law (IHL), which is supposed to protect non-combatants in time of war. Yet not ...

Final preparations for the Syria peace talks are under way in Montreux, where delegations are due to convene on January 22. Best known for its ...

By Simon Bradley in Montreux

A broad coalition of civil society groups has launched a people’s initiative calling for stricter rules to force Swiss companies to respect human ... 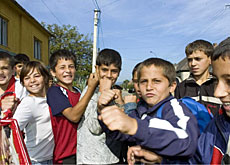 Parliament is facing calls by non-governmental organisations to ensure that Swiss funding for the European Union does not come from development aid. 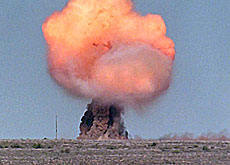 The Swiss government has awarded special legal status to the Geneva International Centre for Humanitarian Demining (GICHD), in the same week that ...

Cornelio Sommaruga has been elected president of the Swiss Foundation for Moral Re-Armament. A former Swiss diplomat, Sommaruga stepped down last ...