For years, tonnes of toxic waste were thrown into the landfill at Bonfol, one of Switzerland’s most contaminated sites. Fifty years after it was opened, swissinfo.ch returns to the scene of a fight that pitted a tiny community against the giants of the Basel chemical industry.

“A leopard is like veal, its meat is wonderful!” exclaims 78-year-old Roger Bregnard, a man proud to have the skin of the spotted animal hanging on his living room wall. “It comes from Gabon. I packed it into a case and no one saw it. Times were different then…”

Different times, like when Bregnard was a young truck driver and drove back and forth between Basel and Bonfol, a community of 700 people in the Jura hills, northwest Switzerland. For two years in the early 1960s, he transported waste from Basel’s chemical companies to the dump in his village. He says he didn’t know what he was carrying.

The run-down facades of two hotels opposite the railway station attest to years gone by when there was a flourishing pottery industry here thanks to the area’s clay-rich soil. The extraction of the clay paved the way for the village to become the site for the dump. That was in the 1950s. When the pit was nearly exhausted, a huge hole was all that remained. The question was how to fill it.

Basel’s chemical companies were looking for somewhere to dispose of their waste and Bonfol’s pit, with its impermeable soil, proved to be just the place. The fact that it was on a watershed – the water running south to the Rhône and north to the Rhine – didn’t appear to be a problem.

From 1961 to 1976, the hole was filled with drums and crates from eight chemical and pharmaceutical companies, including Roche and Ciba-Geigy (which became Novartis after a merger with Sandoz in 1996). During this period, 114,000 tonnes of waste were deposited in the middle of the forest. For the most part, the waste was residue from distillation processes, discarded filters used in pigment production and laboratory refuse. What exactly, no one knows.

“An inventory listing the nature of the substances never existed,” José Ribeaud, author of a book on Bonfol, told the Swiss newspaper, 24 Heures in 2014.

Greenpeace spoke of a “terrible toxic cocktail” of heavy metals, pesticides and organic solvents in a report they published at the time.

There was other waste too: from local watchmaking companies and even the Swiss army. Everything from batteries to tracer ammunition.

And finally, with the pit full to the brim, the hole was covered over with a layer of soil.

The Bonfol landfill where toxic waste from Basel's chemical industry was dumped between 1961 and 1976 (SRF/swissinfo.ch)

Fir trees were planted on top, and the waste seemed to disappear without a trace. That is, until one day in the early 1980s.

“My father-in-law noticed that the water of his fish farm had turned yellow. His carp had died. He put on his boots, walked up the stream that fed his farm and came to the dumpsite. Once there, he saw a worker who was pumping leachate [liquid containing environmentally harmful substances] into the water,” explains Jean-Rodolphe Frisch, the mayor of the French village of Pfetterhouse, on the other side of the border from Bonfol. His story is told in a documentary filmexternal link.

The impermeable soil meant rainwater could not be absorbed into the ground and the toxic liquid began to overflow. The chemical industry tried to contain it by draining the water and installed a purification plant while at the same time reinforcing the cladding.

In 1998, the authorities got involved. There were two key figures: Pierre Kohler, environment minister in canton Jura and his federal counterpart, Philippe Roch. For the first time in Switzerland, Basel’s big companies were called upon to clean up the site.

“I told them Bonfol would be restored. The person responsible started to laugh. He told me that the site could never be cleaned up,” recalled Kohler.

But the two ministers had the law on their side. To be more precise, the new “Ordinance on the Remediation of Polluted Sitesexternal link”. The “polluter pays” principle was clear.

“I finally had legal tools to force the Basel pharma industry to clean up this time bomb,” he said.

The authorities and the pharma industry locked swords. Greenpeace became involved, occupying the Bonfol landfill for two months in May 2000.

In October 2000, an agreement was reached for clearing up the landfill site once and for all.

Journalists wrote of the ‘little community’ in the Jura that had forced the Basel chemical giants to ‘back down’.

But it would take another ten years before work started. In 2010, a hermetically sealed and mobile hangar was built, supported by 40-metre high arches. It was an innovative installation, but the problems still weren’t over.

A few months after the sanitation work began, it was suspended. There was an explosion inside the hangar and a worker was slightly injured (here is security camera footage of the incidentexternal link).

“The forensic scientists found traces of chlorates. It’s strange because in the 1960s the Basel pharma industry didn’t use them,” noted Bernhard Scharvogel, spokesman for bci Betriebsexternal link, the consortium responsible for organising the clean-up of Bonfol.

To avoid other incidents and improve safety, they opted to use a remote-controlled escalator that was operated externally. The mechanical arm could dig into the black soil to a depth of 12 metres. The excavated material was not separated on the plot, but loaded into containers and sent to specialised incinerators in Germany and Belgium, where it was burnt at 1,200 degrees Celsius (2,192 degrees Fahrenheit). After that, the waste was piled into a final landfill.

“A total of 200,000 tonnes of contaminated material was excavated,” Scharvogel said.

Observers talked of an “unprecedented” and “exemplary” clear-up. The operation cost CHF380 million ($390.5 million), paid for by the chemical industry.

The last remnants from one of Switzerland’s major toxic waste landfills – Bonfol in canton Jura – leave the site. A Basel chemical industry ...

On September 2, 2016, 55 years after the first drum was deposited, a historic announcement was made. “There is no longer any refuse in the landfill,” said bci in a statementexternal link.

Fernand Gasser, mayor of Bonfol, said the community could now finally distance itself from the image of a “village of rubbish”.

“Every time anyone talked of Bonfol, they associated it with rubbish and contamination,” he said. “We now want to change this image.”

There are around 38,000 contaminated sites in Switzerland.

At Bonfol, a couple of years are needed before the site returns to its natural state. In particular, experts will have to check whether there is contamination deep down and in the area surrounding the landfill.

Greenpeace is keeping an eye on the site and points out that Bonfol is not an isolated case. “There are numerous other toxic landfills on Swiss soil,” warned spokeswoman Françoise Debons Minarro.

The last remnants from one of Switzerland’s major toxic waste landfills – Bonfol in canton Jura – have left the site. 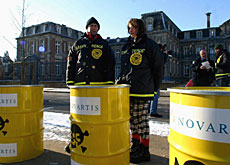 Greenpeace Switzerland has attacked three Basel-based companies for failing to clean up toxic waste dumped just over the border in France. The ...

These days, Switzerland’s waste is normally recycled or incinerated – and very carefully disposed of. But people are still coping with the ...

It’s rubbish! How the Swiss deal with waste

Switzerland scores well in areas like innovation and quality of life, but it’s also a champion at waste generation.