Ice-cream consumption in Switzerland hasn’t change since the 1990s and is far behind that in neighbouring countries. But small local gelaterias are challenging the dominance of industrial manufacturers.

The 5.4 litres of ice cream that the average Swiss spoons down every year is put in the shade by the eight litres in Germany and Italy and 12 litres in sweltering Sweden and Finland.

While these figures from Glacesuisse, the association of Swiss ice-cream producers, include sales from industrial producers such as Unilever and Emmi, sales from the growing number of artisan gelaterias are ignored.

But Leo Egloff, who used to be on the board of Swiss ice-cream maker Mövenpickexternal link, now owned by Nestlé, is convinced of the potential of these smaller start-ups. “If more top-quality ice cream were made, people would eat it,” he says.

Egloff blames the stagnating consumption of ice cream in Switzerland on the general “mediocrity” of industrial ice cream, caused by the addition of vegetable fat and palm oil. Then air is pumped in for greater volume – the greater the volume, the greater the profit margins. While a litre of Mövenpick vanilla ice cream weighs 516g, a litre of premium brand Häagen-Dazs, also owned by Nestlé, weighs 860g.

David Amrein, co-founder and manager of Bern-based Gelateria di Bernaexternal link, says they don’t weigh their ice cream but estimates the volume-weight ratio is 1:1. The company was founded seven years ago and has now five parlours: four in Bern and one in Zurich. It stays well away from vegetable fat and uses local produce wherever possible.

Amrain thinks his business is benefiting from the “general trend for locally and sustainably produced food”. This Slow Food movement, wholly supported by Amrain, started in Italy, with Gromexternal link being one of the first Italian gelaterias to follow the Slow Food principles.

Other recent artisan additions to the Bern ice-cream scene – previously rather barren – include the Eiswerkstattexternal link and La Golosaexternal link.

Egloff, who says the gelaterias are an “excellent response” to laboratory ice cream, compares the evolution of the ice-cream industry to what the beer industry has had to go through: independent local breweries have been forced to innovate to survive.

Although the trend for high-quality handmade ice cream is just starting in Switzerland, the large manufacturers have already taken notice. Emmi is developing new recipes without palm oil, and Mister Cool, Switzerland’s largest private ice-cream producer, also says it is doing away with palm oil and hydrogenated fat.

What's your favourite gelateria in Switzerland? Let us know.

The man who made Mövenpick

Mövenpick founder Ueli Prager who died at the age of 95 on October 15 was one of the most creative and enterprising Swiss businessmen of the ... 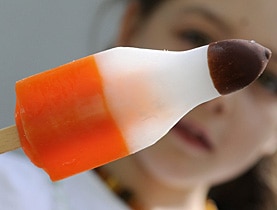 Ice cream sales have fallen for the fifth year in a row since the "summer of the century" in 2003, when Swiss devoured a record 55.5 million litres.