Zoé Frei deems it unfair that Swiss men are liable for mandatory military service while women are not. She joined the army voluntarily and swissinfo.ch spent a day with Frei, one of the few female soldiers in the Swiss military.

Taking large strides, Zoé Frei marches past pretty timbered houses, dozing horses and pristine looking vegetable beds in a farming village near Bern. She wears her uniform and does not seem to be cold even though it’s still a bit chilly at 5:45am on this early April morning. The young woman is walking from her hotel to join her unit. Military regulations stipulate that men and women have to stay in separate accommodation.

“Apart from emergency situations, showers and bedrooms always have to be separate,” Frei explains.

She is the only woman in her unit. When in February this year they had to spend a night outdoors, she had to sleep in a tent which left her freezing cold. “The others were able to snuggle up,” she says laughing. “The officers in charge meant well and only did it for my protection,” she adds. In her opinion, however, such steps are actually not that wise as they assume that her male comrades would harass her. She says she had never ever been harassed since she joined the army.

The threat of sexual violence had been a long-standing argument against women joining the army. Swiss women in particular had to fight for their right to serve in the military for a long time. In 1940, an assistance serviceexternal link for women wanting to join the army was set up. However, it took until 2001 before all military functions were accessible to women, including combat missions and full weaponry.

In the dining hall of the military barracks sleepy soldiers are slowly starting their day. They grab a piece of bread and mix instant coffee with hot water from the big thermoses. Only Frei seems awake and in a good mood. Unlike her, her male colleagues are not here voluntarily. They are doing their mandatory military service. According to Swiss law, men and women should be treated equally with the only justifiable exceptions being pregnancy and childbirth. When it comes to conscription, Switzerland obviously makes another exception.

Last summer, the Federal Supreme Court (Switzerland’s highest court) ruled that military conscription for men was a contradiction to the principle of non-discrimination. The court, however, left the tricky dilemma of addressing this contradiction to the government. There are two ways to achieve gender equality. One way is to extend conscription to women, a move that has been the subject of controversy several times in the past. The other option is to abolish it altogether. In 2013, a popular vote showed that 73% of the voters were against the abolition of mandatory military service.

Father thought it was a silly idea

The fact that Frei has joined the military voluntarily has invoked some disbelief.

“Some of my comrades have told me that I mustn’t moan or complain as it was my own choice to be here,” Frei explains.

Her family also showed little understanding for her decision to join the army. Her mother calls herself a pacifist. “And my father thought it was a silly idea. He said the army was a waste of time and that I’d be better off learning a profession.”

Nevertheless, Frei has made some tangible achievements since she joined the army. Serving in the logistics unit, she was able to obtain a driver’s license for small trucks. Her job is to transport goods from one place to another.

Today, her job takes her across Switzerland. Together with three other comrades, Frei drives a Duro – a military vehicle for transporting crew – to canton Zurich, collects a trailer and takes it to western Switzerland. Frei likes the fact that she gets to see the whole of Switzerland during her working hours.

For the first time in her life, she deals with people from canton Ticino or canton Uri.

“In the military, you work with people you would normally never ever get in touch with,” she says.

It’s a colourful linguistic mix of French, German and Italian. At 0.7 per cent, the women’s share in the Swiss army is especially low compared to other countries, not least because of male conscription. Hence, the Swiss army makes a particular effort to recruit women.

With 250 women deciding to join the military, 2017 was a record year marking a 35% rise compared with the previous year. The army recommends intensive training to prepare for the recruitment process.

Being relatively tall and strong for a Swiss woman, Frei overestimated her abilities: “The army has pushed me to limits I did not know I had,” she explains.

As a woman in the Swiss military you can neither be fastidious nor vain.

“You sweat, you can only have one shower per day and you certainly don’t always look your best. You have to be able to accept this.”  Frei even had her long brown hair cut short because she could not tie it up properly. Something she has since slightly regretted.

Military service On the road with Soldier Frei

swissinfo.ch spends a day following Zoé Frei in her work as an army truck driver.

At noon, Frei and her comrades sit on a bench at a service station and unwrap their homemade sandwiches. They chat, but the subject of their conversation is not the military. They talk about social issues. Frei tells them that at the age of 15 she wrote a fantasy novel which was published by a Zurich publishing house. The atmosphere is calm and peaceful. The male soldiers don’t seem to mind that one of their comrades is a woman. They don’t really think much about women in the military and are more concerned about finishing their own military service and starting university.

Frei’s plan is to finish the Swiss secondary school diploma and study sociology. Given the consistency with which she has managed her life so far, it’s very likely that she will do it.

After their lunchbreak, the team continues westwards. The soldiers drive through an undulating meadow landscape, passing castles, big estates, vineyards and picturesque villages. “It almost feels Mediterranean here,” Frei observes, and she is right. In this region to the south of canton Jura, the influence of Lake Geneva creates a Mediterranean climate which makes viticulture possible. During her working hours, Frei was able to discover how versatile Switzerland can be, even in the smallest space.

At the military base in Bière - a vast area with shooting and training facilities as well as a row of fake houses for ground combat practice - Frei and her comrades deliver the trailer. They have no clue what exactly they have handed over to their colleagues in western Switzerland, but they don’t really care. They want to get back to their unit as quickly as possible and line up for appeal. Once this is over and done with the soldiers can go home for the weekend, apart from Frei. She is on guard duty from today and has signed up voluntarily to do the night shift.


Translated from German by Billi Bierling

Nouvo Women step into line in the Swiss army

Women haven’t always been part of the army in Switzerland. This is the story of how they’re becoming more and more accepted. 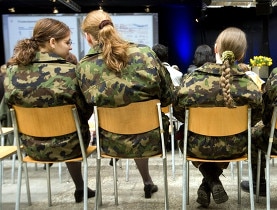 Female politicians have launched a proposal to end compulsory military service in Switzerland in the hope of improving equality in the army. A ...

Switzerland is taking further steps to implement an international resolution that aims to increase the participation of women in the peace ...