In Switzerland 75% of children walk to school – that’s twice as high as countries like the United Kingdom and the United States. But there are worries that this could be changing.

As any foreigner with children going through the Swiss school system - particularly in German-speaking part - will know, letting your children walk to school or even Kindergarten at a young age is a rite of passage. But it is something that you have to get used to, particularly if you come from a country where pupils are often driven to school.

October marks walking to school month in many parts of the world, with October 4 designated International Walking to School Dayexternal link. Switzerland held an awareness day on September 22external link.

A recent reportexternal link commissioned by the Swiss Association for Transport and Environmentexternal link (VCS in German) found that 75% per cent of children walk to school in Switzerland. That compares to around 30-40% in the United Kingdomexternal link and the United Statesexternal link. Even neighbouring Gemany does not post such a high percentage at 50% in 2012external link.

VCS spokesman Matthias Müller said that tradition was one reason why so many Swiss children walked to school. Many mothers did not work, so they organised between themselves for children to gather together to walk to school, accompanied by one adult in a rotating role. More mothers work now, but the expectation that children go by foot has stayed, he said.

Independence is also encouraged from an early age. “This has to do with the tradition of the federal state in Switzerland, this healthy sense of liberalism in which you take care of yourself,” Müller said.

It is also much safer in Switzerland as there is certainly less traffic than in big cities like London and Sydney, he pointed out.

Nevertheless, the number of parents driving their children aged between 6 and 9 to school is on the increase – it has risen by 40% in the past ten years, according to the microcensus data in the report.

Safety was cited as a main concern by a third of the parents polled for the study.

“Parent taxis” are more widespread in the French and Italian-speaking parts of the country.  Whereas in the German-speaking part, only 11% of children are taken to school at least once a week by car, this rises to 50% in the French part and 63% in the Italian part, Ticino.

Parents in German-speaking Switzerland feel school routes are safer due to the many traffic calming measures, especially around schools (e.g. 20-30km zones), said Müller. These are less common in the other parts of Switzerland, he explained.

VCS says that it can be dangerous if many cars are letting children out at the school gates. It also brings children health benefits to walk to school.

Teachers agree. “We don’t want pupils becoming a ‘generation of backseat kidsexternal link’ who are driven to school each morning by their parents,” said Beat Zemp, president of the Swiss Teachers’ Associationexternal link, in comments on the VCS walk to schoolexternal link website. “It makes more sense to first walk and then bike to school. This strengthens children’s’ self-confidence and their social skills. Also movement is healthy and contributes to the fight against obesity.”

VCS is currently running a campaign to encourage more walking to school, particularly through the promotion of the pedibusexternal link "walking school bus" in which groups of children, aged 4-8, are accompanied to school by an adult. This is particularly popular in the French-speaking part of the country, where the pedibus has been in operation for 15 years.

A quick, unrepresentative, poll of parents at swissinfo.ch confirmed the cultural differences. It found that in the German-speaking, more rural areas, children were encouraged to walk to school or kindergarten from an early age. They received “training” from the local policeman. In bigger cities, some parents have banded together to take turns in accompanying children to school. In Zurich, for example, the police publish a map of safe routes to schoolexternal link. A parent living in Bern said that walking to school was encouraged to give children independence.

The pedibusexternal link was reported to be popular in Lausanne and growing. However, it was felt that the walking to school was in general less popular in western Switzerland. The school bus is often a lifesaver in rural areas where there is a long way to go to school, parents said.

Children in Switzerland typically walk or play outside each day without strict supervision, part of a cultural legacy that might not last. 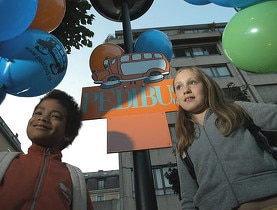 All aboard for the walk to school!

Switzerland is marking International Walk to School Day on Friday to highlight the road safety issues children face on their way to school. ...