While mixed marriages are on the rise in Switzerland, they are not immune to divorce. Are the stakes of failure higher for binational couples? swissinfo.ch put the question to readers and experts.

“You can come from the south pole and the north pole and love each other to bits, or be born in the same palace and want to shoot each other,” wrote one reader in Italian.

swissinfo.ch has not verified the individual testimonies included in this article.

The success or failure of a relationship, many seem to agree, hinges more on the personality than the nationality of the partners: in particular, how a couple communicates and handles conflict. Culture and mentality can play a role but it is not the only factor.

In the past three decades, binational marriages have tripled in Switzerland, with 15,100 documented in 2016, making 36.3 percent of all marriages. On average, more than a third of unions end in divorce, although in some cantons the divorce rate is closer to 50%. A failed marriage, many feel, can be more dramatic for binationals.

“It is a great challenge to have a binational relationship, especially if one nationality is more exotic,” says divorcee A.A.

She married a Swiss “Romeo”, made a career in Zurich, and had a son. But it all went downhill after moving in with her in-laws. Her Swiss husband left deliberate clues of infidelity. In hindsight, she believes he wanted a divorce assuming he’d get sole custody.

“I married Prince Charming. He turned into a monster,” she claims.

She recently moved from Mexico back to Switzerland to enroll her son at university. The move was in part necessary because the father stopped paying the son’s education allowance, an issue she wants to take up in court.

Binational couples might face thornier legal issues than their homogenous counterparts. When it comes to getting help, language can be an issue for the foreign spouse, notes Zurich-based lawyer Katharina Stucki, who is sought out by Portuguese speakers since she is herself one, coming originally from Brazil.

“When binational couples want to separate, because they have different views and a different culture, conflicts get more accentuated,” says Stucki.

The question of children, especially when one parent wants to return to their home country, gets tricky. By law, the consent of both parents is needed for a child to move abroad. Cases of parental abduction are not the norm, notes the lawyer, but they are not that rare either.

Switzerland’s Central Authority for Dealing with International Child Abductionsexternal link reports an average of about 240 cases per year, with roughly half carried over from the previous year.

Switzerland is a signatory of the Hague Convention on the Civil Aspects of International Child Abductionexternal link, which aims to expedite the return of abducted children, so they do not get accustomed to the place where they were brought without the other parent’s consent.

“In Switzerland, it works quite well and fast,” says Stucki. “In other countries, it can be quite the process. In Brazil, for example, it depends on where the child is, but it can take months or years.”

최세미 says: "I don't think it is a matter of citizenship but the way you think and value."

Similar issues can arise even when the parent stays in Switzerland. A native of Israel, who requested anonymity, says his former Swiss wife stopped allowing the children to visit him when the eldest two were 11 and 13 and she turned them against him.

He involved KESBexternal link, an interdisciplinary authority which was created to protect the rights of children and adults unable to do this for themselves. A judge deemed him fit as a father but deferred to the wishes of the children, perceived as old enough to decide.

“My position was weaker because everything happened in German, which is not my mother tongue. I had to struggle to express myself better. Of course, this played against me,” says the man, who eventually became a Swiss citizen and formed a new family.

Numbers that don't add up

The finances of divorce tend to be trickier for bi-national marriages - especially in the case of multiple assets that are geographically spread out. Resolving disputes, such as non-payment of alimony or child support payments, becomes more complicated when you split and live in different countries.

For high-income international marriages, the math gets murkier. When it comes to alimony, splitting assets and establishing the net worth of individuals, arguments may arise over what is defined as income—the salary and the bonus, or just the salary? The rulings of a Swiss judge about matrimonial properties held abroad are not enforceable.

Moving to a cheaper country, notes Stucki, can also translate into lower child allowances since judges typically use the UBS Prices and Earnings as a reference, disregarding perhaps the cost of private education in countries where public schooling is not at the standard of Switzerland.

“If everything is in Switzerland, it can be solved, the courts can decide on it,” says Stucki. “The problem starts when there is property abroad. It can be difficult to get information… and the higher the income, the fiercer the battles over alimony. In many cases, the Swiss part of the couple doesn’t want to share the financial information.”

When the foreign woman is fully dependent on her Swiss husband – an outdated but still common gender dynamic - the tendency is to seek help late and take the husband’s threats that they will be kicked out of the country and lose their children at face value.

“They only look for help when the problem is really big,’” notes the lawyer. “The system is not bad for them but there is a lot of misinformation.”

American citizen C.T. says she consulted five lawyers specialized in family law while separating from her Swiss husband, whom she had met and lived with in the United States before moving here. Their 2016 divorce capped multiple traumas.

“My husband is a millionaire and I am on welfare,” she told swissinfo.ch, listing a long litany of bad experiences, and accuses her husband of trying to hide his assets.

“Swiss divorces are violent,” she added. “The Swiss milk you for everything and they scare you to death. The collection agency was coming after me for bills that my ex-husband refused to pay. As a foreigner, my distress was, I don’t understand these papers.”

Being American, she says, made her “willing to fight” for her rights.

Some binational couples have no choice but to rush into marriage for logistical reasons, especially if one of the partners comes from a nation that is not part of the EU/EFTA region. Marrying a Swiss citizen opens a path to residency on the basis of family reunification.

Hubacher works for the Bern branch of Frabina, an organization helping binational couples on issues ranging from marriage to divorce and migration, in different languages.

One in three marriages in Switzerland is binational, according to federal statistics. Swiss public television asked couples from two different ...

“If you come from Germany, the problems are less,” noted her colleague, Hafed El-Badaoui, who counsels Arabic speakers. “You already speak the language. Your diploma might be accepted. You don’t have to start from the beginning, from below zero.” Hubacher says while there is a robust support system to assist refugees with their integration into Switzerland, foreign spouses of Swiss nationals are often quite isolated and highly dependent on their Swiss partner.

Financial pressures might be higher at the outset and integration slower, notes El-Badaoui. “They have to start first with the language, education, get a job, deal with being away from their family. There is a gap in the couple,” he said

Swiss spouses may be surprised by cultures that have a more expansive notion of the family because in Switzerland as in many Western countries the focus tends to be on the nuclear unit. This can create friction if one spouse wants to send money to help relatives back home.

A Swiss partner may also be disinclined to spend all vacation time in the country of the spouse. If they are the primary breadwinner, they might be sensitive to having to settle fines incurred by a partner from a country with fewer rules and regulations.

The skepticism of others—whether consular authorities abroad or conservative relatives at home—who may assume the marriage is based on interest rather than love might be added stressors.

“Sadly, most of mixed marriages are based on ‘residency papers,’” said swissinfo.ch reader Moha Monib, reflecting a common view among our readers.

The social workers at Frabina say these fears are overplayed and that such cases are the exception. The red flags to look for are larger age gaps and the lack of a common language but they note that marriages of convenience can arise and succeed even within one culture.

Chadi Hamad, a Lebanese native who married a Swiss national and became a citizen, says he came under investigation ten days after filing for divorce, with the authorities raising concern over times the couple had lived apart before they were married.

“It is a very difficult procedure to get the nationality,” he said in a phone conversation with swissinfo.ch. “You can’t just go to a kiosk and buy it. Why didn’t they raise these issues while I was still married?” 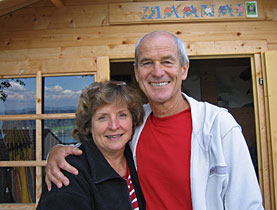 When it comes to love, more and more Swiss people are falling for foreigners. Nearly 38 per cent of weddings in 2006 were between a Swiss and a ...

Immigrant youths are "made in Switzerland"

A new book indicates that religion plays an important role in identity-building among adolescents with immigrant backgrounds in Switzerland. The ...

By Susanne Schanda in Lucerne

Nouvo Marriage for all in Switzerland

Marriage for homosexual couples in Switzerland: Yes, but not too fast! In Bern, they came up with a first “light” version... but does it look more ...

Nouvo Families are changing: for better or for worse?

In 2017 there were fewer births, fewer marriages and also fewer divorces in Switzerland.