The Gotthard road tunnel needs to be overhauled. To maintain the flow of traffic through the Alps, the government proposes building a second tunnel. Opponents of the plan fear an increase in traffic and pollution. Voters will have the final say on February 28.

With five million cars and 900,000 long vehicles a year, the Gotthard road tunnel is one of the major crossing points in the Alps. 58% of vehicles crossing the Swiss Alps transit by the tunnel, which links Göschenen in the north and Airolo on the southern side. At 16.9 km it is one of the longest road tunnels in the world.

After 35 years of service – it was inaugurated in September 1980 – the tunnel is in need of a complete structural overhaul.

The roadworks required involve the paved surface, the side walls and the ceiling, but also the emergency passage and the ventilation system.

This is major work which will mean a prolonged closure of the existing two-way underground thoroughfare. So the basic question has arisen: how is the flow of goods and people between the north and south of Switzerland but also central Europe to be maintained during the renovations?

For the Swiss government, “the best and most lasting solution” would be construction of a second tube, followed by renovation of the existing tunnel. The Gotthard road axis is a vital artery for Switzerland and therefore has to remain in operation, said Transport Minister Doris Leuthard last October as she launched the government’s campaign for a second tunnel.

In 2014, parliament decided in favour of revising legislation on road transit in the Alpine region, in order to authorise the construction of a second tunnel.

For the centre-right majority, the two-tunnel solution – although it costs more than the other options – will prevent a prolonged closure of the north-south road axis, ensuring that the southern canton of Ticino is not cut off from the rest of Switzerland. It will also mean better road safety.

The decision was opposed by leftwing Social Democrats and Greens, who believe a second tunnel would inevitably lead to heavier traffic and pollution of the already fragile Alpine environment.

This view is now being put forward by the 'no to the second tunnel' campaign, a coalition of some 50 organisations like Alpine Initiativeexternal link, which has managed to force a referendum vote against the legislative changes, collecting 125,000 signatures although only 50,000 were required.

“The doubling of the Gotthard tunnel would sabotage the transfer of goods from road to rail,” claims Jon Pult, president of the Alpine Initiative.

The second Gotthard tunnel would be built 70 metres from the existing tunnel. It would have the same length (16.9 km) and would be completed in seven years. The inauguration could take place in 2027. The costs of carrying it out are estimated at CHF2 billion, according to the government.

Including renovation of the existing arm, total costs of the “doubling-up” option would come to CHF2.9 billion. The “rolling highway” option, with transfer stations from road to rail, would cost CHF1.8 billion.

Upgrading the motorway, he maintains, amounts to competing with the new Gotthard base railway tunnel (the Alptransitexternal link project) due to open in June this year.

And there is more at stake. With the new tunnel, the number of lanes of traffic would increase from two to four, says the group’s spokesman, Thomas Bolli.

“Technically, we are doubling the capacity. But it says in the constitution that the capacity of transit traffic in the Alpine region cannot be increased. The people decided on that 20 years ago,” he points out.

In 1994, voters accepted the idea of anchoring an article in the Swiss constitution to protect the Alps, which limits the pollution level of through traffic allowed.

The assurances of the transport minister to the effect that only one lane would be operational in either direction do not convince opponents.

“How is the government going to react when traffic is backed up for miles at the entrances to the Gotthard? Will it keep the vehicles moving on a single lane?” asks a sceptical Pult.

The referendum was launched by a broad alliance of environmental organisations and centre-left parties in 2014. Parliament approved the proposal in September of the same year.

The referendum is one of four issues to come to a nationwide vote on February 28, 2016. Other issues include a proposal for family tax breaks, a ban on food speculation and a proposal to enforce the automatic deportation of convicted foreigners, thereby curbing the powers of parliament.

“Let’s have no illusions,” insists Caroline Beglinger, co-director of the Environment and Transport Association. “The second tunnel will hardly be open before the agitation starts to open all four lanes.”

Her fear is that, faced with traffic jams backed up for miles at the Gotthard, as often happens during holiday peaks, the Swiss government will soon yield to pressure from transport lobbies and the European Union.

On the other hand, another group of opponents featuring centre-right politicians puts forward financial arguments.

The about CHF2 billion ($2 billion) to be budgeted for the second tunnel, they say, would be better invested somewhere else – for example in improving the infrastructure in congested areas of Switzerland like greater Zurich or along the Lausanne-Geneva corridor.

As an alternative, opponents of the two-tunnel approach favour the “rolling highway” concept, with cars and trucks being loaded onto shuttle trains.

This would mean that heavy vehicles would move along the new Alptransit tunnel, while cars would go via the old Gotthard railway line.

For Christian Democratic parliamentarian Filippo Lombardi, of the committee in favour of the Gotthard tunnel renovation, the rolling highway option would mean high costs with little value added.

The transfer stations – which neither the authorities in Ticino nor in Uri want on their territory – would have to be dismantled when the renovation works are completed, the Ticino senator points out.

Saying no to two tunnels, he claims, just means leaving future generations with the problem of renovating the existing tunnel, which will come up every 30-40 years.

But it is really the issue of safety that advocates of a second tunnel focus on, including some politicians from the left: with two tunnels it will be possible to eliminate the danger of head-on and side collisions, thus reducing the overall number of accidents.

“Today we can no longer build 17 km tunnels with two-way traffic. It is against European safety rules,” points out Bernhard Salzmann, communication manager for the Association of Small- and Medium-sized Enterprises, which supports the two-tunnel solution.

To improve safety, however, the Alpine Initiative group says there could be central barriers that could be raised and lowered, and use of innovative technologies like advanced driving assistance in vehicles.

It should not be forgotten, says Bolli, that roadwork carried out since 2001 has gone a long way towards improving safety. “What is dangerous in the Gotthard is not two-way traffic, but the transit of heavy vehicles.”

The last word will be with the voters on February 28. In the two preceding nationwide ballots, in 1994 and 2004, a majority of voters were against doubling the capacity of the Gotthard tunnel.

Debate on a second tunnel for the Gotthard has been fuelled by some inconsistencies in the information put out by government agencies.

In one report, the Federal Roads Office has indicated that construction sites for doubling the Gotthard tunnel would require 220,000 m2 of land in Ticino (equivalent to 21 football fields) and 150,000 m2 in canton Uri.

These figures are much larger than those put out earlier by the government, which until recently was talking in terms of 30,000 and 29,000 m2, respectively.

The figures quoted earlier were based on a preliminary study from 2010 and did not take into account the space needed for processing and transport of construction materials, the office has suggested.

In November, officials said that, using simple and established approaches, the existing tunnel could safely remain in operation till 2035. Earlier, the deadline had been given as 2025.

Finally, in contrast with what has been claimed so far, it will not be necessary to close the tunnel for 140 days before renovation work starts. The most urgent tasks can in fact be done during the normal down-times at night.

North-South Through and over the Gotthard

Today you can drive through the Gotthard tunnel at around 80km/h, but going south – or north – before the tunnel was built was a real test of ...

By failing to implement legislation to protect the Alps from transit traffic – by shifting freight from road to rail – the government is violating ...

Opponents of plans to build a second road tunnel through the Gotthard in central Switzerland - a major transalpine thoroughfare in Europe - have ...

Parliament has paved the way for a second road tunnel through the Gotthard in central Switzerland, but voters are likely to have the final say on ...

From road to rail After 20 years, Alpine truck traffic still not on track

Two decades ago, Swiss voters surprisingly accepted an initiative aimed at protecting the Alps from transit traffic. While the result led to a ...

Ten years after the tragedy of 2001, the Gotthard is one of the safest road tunnels in Europe thanks to new safety features and improved emergency ...

Former construction workers and local officials have marked the 30th anniversary of the opening of the Gotthard road tunnel, at the time the ... 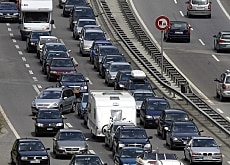 Safety remains the rule at Gotthard

Five years after the fatal Gotthard road tunnel fire, safety has improved with fewer accidents, but tailbacks have increased noticeably with ...

Due to open in 2016, the Gotthard base tunnel is not just a hole through a mountain. For ten years hundreds of workers braved tropical ...