What has been common practice in the banking world for years is now set to be introduced in official administration and private firms: electronic signatures.

SuisseID is a password-protected card, also available as a USB stick, which makes the use of multiple passwords unnecessary and saves time and money with a safe system for electronic transactions.

“Today is a groundbreaking day for the security of e-commerce,” Jean-Daniel Gerber, head of the State Secretariat for Economic Affairs (Seco), said at Monday’s presentation.

SuisseID acts as a secure digital signature for correspondence, forms and purchases. It guarantees that emails are from who they say they are from and allows users to sign documents digitally. It can also keep children from making inappropriate purchases online, such as age-restricted video games.

The card, available for the time being at post offices or through the makers, costs SFr33 ($30) annually and the whole project benefits from a SFr17 million financial subsidy from the government, which also contributed SFr4 million towards development.

However, a consumer group recommends waiting before snapping up a SuisseID card, because only a few companies or local authorities have joined the scheme.

Sara Stalder from the Swiss Consumer Protection Group said that although the card was attractively priced, it didn’t have any everyday benefits and that it was too early to talk it up.

She also warned of disappointment, pointing out that neither official administration nor online banking could currently be carried out using SuisseID.

Very few communes were involved, she added, and only one canton – St Gallen – was ready for the card.

Stalder expected the price of the card to drop, even without government subsidies, and said she thought many employees would be given SuisseID free by their bosses.

In fact possible uses are seriously limited: according to Seco, the card can be used in around 50 online services.

Gerber said more than 150 companies had expressed interest – “significantly more than we expected” – adding that Seco was convinced that possible applications would greatly increase by the end of the year.

One place where the card can be used immediately is Switzerland’s largest online bookshop, Buch.ch. Other online firms plan to introduce the card to be able to check customers’ ages.

Official use also remains limited. The Federal Tax Administration wants to introduce “gradually” from 2011 the option of filling in VAT forms online.

Inhabitants of Olten and Zug can already buy parking passes and register their children for schools online. Other communes are set to follow and offer the option of carrying out administrative tasks electronically.

It is therefore conceivable that in future a digital signature will suffice on tax forms, which can then be submitted electronically.

Today, it is already possible to request extracts from police records or gain permission to distil one’s own alcohol using a digital signature.

A digital signature is also an important element of e-voting.

But this is another area lacking rapid, comprehensive coverage, for the electoral roll is the responsibility of the country’s 2,600 or so communes.

The Swiss Commune Association backs the introduction of SuisseID, but is concerned that most communes are facing what appears to be a done deal.

“It’s ambitious,” admitted project manager Christian Weber, “but I’m confident the target will be hit. Compared with other countries, Switzerland has ground to make up in this area.”

Around 80% of Swiss expatriates have registered to vote have access to the internet.

Postal voting was introduced in 1992 and the introduction of electronic voting is scheduled for 2015, according to the Federal Chancellery.

The introduction of e-voting is expected to require an investment of up to SFr600 million ($548.5 million). Trials have been launched in three of the country's 26 cantons with the approval of the federal authorities.

Advisors step aside for e-private banking

A new internet private banking service aims to cash in on wealthy people who prefer to trust their own instincts than financial advisors to manage ...

The authorities are hoping to dispel concerns among Swiss expatriates over the sometimes difficult process of applying for new biometric ... 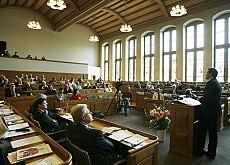 The Council of the Swiss Abroad has called for Swiss expatriates to be able to cast their votes electronically – by the 2011 federal elections at ...

The picture they all wanted turned out to be doctored. An exhibition in Bern's Museum of Communication running until July 6, 2008 features more ...