The toxic weedkiller paraquat, which is produced by Swiss agrochemicals giant Syngenta, has been banned by a European Union court for not meeting health standards.

Swiss pressure group the Berne Declaration, which has fought for several years to have the product outlawed, hailed the decision as "a milestone".

Paraquat has not been approved for use in Switzerland since December 31, 1989.

The substance, which has been in use for more than 40 years, is the main ingredient in Basel-based Syngenta's Gramoxone. The weedkiller is used by millions of farmers worldwide in over 120 countries.

Campaigners say many workers and farmers exposed on a regular basis to paraquat suffer serious health problems, adding that its high toxicity can lead to death.

Wednesday's ruling followed a legal challenge by Sweden, which was supported by Denmark, Austria and Finland.

"This is a big victory for Sweden, civil society and the developing countries as well," Oliver Classen, spokesman for the Berne Declaration, told swissinfo.

"Syngenta has always claimed that what's not banned in the EU cannot be that bad. They have been running this argument for years and now it's over. It's a milestone in the slow and dreadful history of banning this substance."

The court criticised EU regulators for not checking more carefully whether paraquat was safe for humans and animals before the product was authorised for sale in 2003.

It said the European Commission – which is in charge of clearing herbicides and pesticides for sale – was wrong to say there were no signs that the chemical could cause diseases of the nervous system such as Parkinson's.

It said regulators should have looked at studies on the subject, as well as another report on exposure levels, arguing that they supported doubts about the safety of paraquat.

The court also criticised the commission' s failure to check thoroughly the effect on paraquat on hares and birds that would be exposed to the chemical.

Responding to the ruling, Syngenta, which was not directly involved in the legal action, said it was surprised by the "unprecedented decision" to annul the 2003 directive.

The company said the original decision by the commission to clear paraquat had been preceded by a full scientific review. It said more than half a million European farmers used the herbicide.

"Syngenta has comprehensive data that support the safe use of paraquat for users, consumers and the environment," said a spokesman.

Syngenta declined to give a figure for Gramoxone sales in the EU but said they were "not significant" compared with overall crop protection sales.

The company added that the commission had the right of appeal to the European Court of Justice and could apply to have the ruling suspended pending the outcome of an appeal.

Syngenta is the world leader in crop protection and ranks third in the high-value commercial seeds market.
Last year it increased net profit by 12% to a record $872 million (SFr1.05 billion).
Syngenta was formed in 2000 by the merger of the agrochemicals divisions of British-Swedish concern, AstraZeneca, and Swiss pharmaceuticals giant Novartis.
It employs about 21,000 people in more than 90 countries.

Critics say exposure to paraquat during mixing and spraying can in the short term produce acute toxic effects including nosebleeds, irritation and burns to the skin.

They say chronic exposure to paraquat can affect the lungs, nerve system or brain. In epidemiological studies long-term exposure to low doses of paraquat has been associated with an increased risk of developing Parkinson's Disease.

Syngenta says Gramoxone has been endorsed by leading international organisations and that when used as directed, there is no safety hazard associated with its use.

It says its physical properties make it safe to handle, when used according to directions, with the required protective clothing. 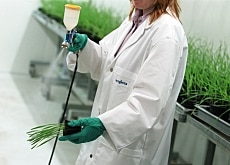 The Swiss agrochemicals giant Syngenta is trying to prevent the expropriation of a farm used for testing transgenic seeds in Brazil. The state ... 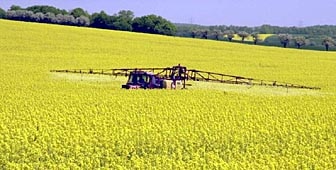 A Swiss group is trying to force the biotech firm, Syngenta, to stop selling a pesticide blamed for damaging the health of farmers. The Berne ...