Switzerland has called for the 57 member countries of the Organization for Security and Co-operation in Europe (OSCE) to subscribe to the no-ransom principle to more effectively prevent the financing of terrorism through kidnappings.

In the opening speech at the OECD conference on countering terrorism, Swiss Foreign Minister Didier Burkhalter, who currently holds the OSCE chairmanship, said on Monday in Interlaken that the best way to fight terrorism is to hinder its financing.

There is “plenty of evidence that ransom payments finance additional terrorist activities and fuel further kidnappings”, he said.

Burkhalter said it is important “to make sure that terrorists no longer regard the kidnapping of our citizens as a valuable source of income. The most effective measure to disrupt this pattern is to apply and promote a policy of no-ransom.”

Switzerland seeks to broaden international support for a no-ransom policy, to promote international cooperation when terrorist kidnappings occur, and to prevent people from travelling to high-risk places, Burkhalter said.

A growing number of Swiss nationals have got into trouble on foreign trips over the past years, fuelling discussion on ransom payments and the financing of repatriation.

In 2012, two Swiss travellers escaped eight months after being snatched by the Taliban in Pakistan. In 2009, a tourist was released in Mali after being kidnapped at a Tuarag tribe festival near the border of Niger.

The Swiss government’s policy is not to pay ransom, but the authorities spend hundreds of thousands of francs supporting Swiss travellers abroad each year.

In January 2014, the UN Security Council adopted a resolution on kidnapping for ransom, which emphasises that the safe release of hostages has to be secured without ransom payments or political concessions. It also recognises the need to continue expert discussions on kidnapping for ransom within the UN and other regional organisations.

Switzerland is convinced that the OSCE has an important role to play in countering terrorism, Burkhalter said. This is why he decided to make counter-terrorism policies a priority topic of his chairmanship.

The goal is to take the successful work of the OSCE in the field of terrorism further and advance key issues that in his view should be addressed in a holistic manner, he added.

“Applying the no-ransom principle is no easy policy to pursue,” Burkhalter told the conference. “And yet, I am convinced that it is an indispensable measure to prevent kidnappings in the future and discourage potential hostage takers.”

The conference in Interlaken represents a concrete step to implement the UN resolution at the level of the OSCE, the largest regional security organisation, Burkhalter said. “I regard it as positive that the fight against ransom payment is shifting from isolated efforts of individual states to the international agenda.”

The participants at the OSCE event are representatives from organisations including the European Union, the Council of Europe, and the Global Counterterrorism Forum.

They will discuss ransom payments and  how to counter terrorism in accordance with human rights and in legal, transparent, and accountable ways. Burkhalter’s speech was the only part of the event open to journalists.

Another subject discussed at the conference will be how to deal with so-called “foreign fighters” travelling to, and returning from, conflict zones. For example, an estimated 2,000 citizens from OSCE states are currently engaged as “foreign fighters” in the conflict in Syria, Burkhalter said.

A Swiss couple held captive by the Taliban in Pakistan since July 2011 have been freed. The pair from canton Bern were filmed by local television ... 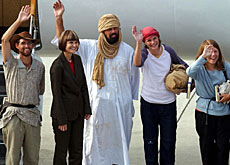 A year ago four Swiss citizens were kidnapped in the Sahara desert and held hostage for almost six months before being set free. While the exact ...

Two years ago, a young Swiss couple was driving along the Old Silk Road when, in Pakistan, the adventure became a nightmare: they were kidnapped ... 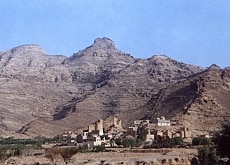 Former hostages to foot bill for their release

Two Swiss, held hostage in Bosnia-Herzegovina in 1995, have been ordered to reimburse the expenses incurred by the Swiss government to secure ...