The government, cantons and most political parties are backing a tightening of regulations governing casinos and lotteries, as well as efforts to prevent gambling.

The constitutional amendment will come to a nationwide vote on March 11 amid increasing competition from game operators abroad following the partial liberalisation of the gambling and betting regulations in Switzerland more than ten years ago.

The vote on money games – one of five issues to be decided on – may seem a simple formality, but the figures at stake are not to be scoffed at.

In 2010 about SFr1 billion ($1,06 billion) in revenue from casinos, lotteries and commercial bets went towards social projects and the old age pension scheme, according to official statistics.

“This is reason enough for the government to intervene and set clear rules,” said Justice Minister Simonetta Sommaruga.

A key provision in the proposed constitutional article foresees preventive measures to fight addiction, the protection of minors as well as fraudulent criminal activities, she added. “The federal and cantonal authorities have to take fully into account the risks of gambling.”

The proposal also clarifies the role of the federal authorities and the 26 cantons.

Setting clear rules and defining areas of competence helps to create legal certainty and ensure continued financial support for about 16,000 non-profit projects of public interest, according to Hans-Jürg Käser, president of an intercantonal body in charge of lotteries.

“Cantons and the federal government would suffer considerably if consumers in Switzerland were to use the services of foreign, illegal and criminal providers over the internet or in backrooms of bars and restaurants,” Käser said.

Under current regulation, casinos need a licence from the federal authorities, while the cantons are responsible for regulating lotteries, bets and skill-based games.

No major change is planned for the use of revenue generated. The federal contribution goes towards the state old age and disability insurance while the net yield from lotteries and sport bets is destined for non-profit projects.

But enshrining the agreements in the constitution will boost their legal importance according to Sommaruga.

Most political parties voted in favour of the amendment when it was discussed in parliament last year.

A notable exception were the representatives of the small Protestant Party which have criticised what they consider an inherent contradiction as gambling is directly linked to revenue for non-profit projects.

“Thus there is a risk of encouraging money games. The amendment will increase the number of gamblers and also of addicts,” warned Maja Ingold, a parliamentarian for the centre-right group.

She points out that gambling addiction is a serious social problem. More than 28,000 incidents were recorded in 2010, according to Ingold.

The group is calling for further restrictions on the use of skill-based games such as Tactilo.

The proposal to be voted on is a counter-proposal to an initiative by a broad coalition of political parties, social and culture groups and sport organisations.

They handed in enough signatures in 2009 to force a nationwide vote, but withdrew their initiative after parliament thrashed out a compromise.

Popular but considered immoral, all the Swiss cantons banned lotteries in 1915.

Throughout the 1930s and 1940s four main lotteries were set up which held a monopoly.

Currently there are two main companies, Swisslos and Loterie Romande, run by the cantonal authorities.

There are currently 19 casinos operating in Switzerland.

Last year the justice ministry granted two additional licences, notably one in the city of Zurich.

The casinos generated a gross yield of SFr868,689 of which just under SFr450,000 went towards the state old age and disability insurances.

Casinos were outlawed in 1874, before the ban was formally lifted again following a nationwide vote in 1993. The first licences were granted in 2001. 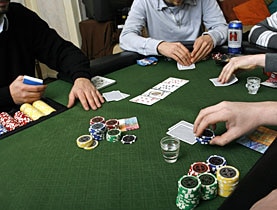 Switzerland's cantons are drawing up legislation for poker tournaments following a government decision to end casinos' monopoly on the ... 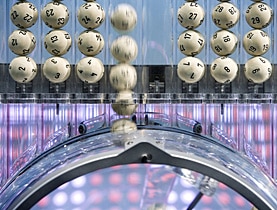 Many Swiss gamble their lives away

Will the person or persons who won SFr15 million ($13.9 million) in the Swiss lottery this weekend find happiness? swissinfo.ch put that question ... 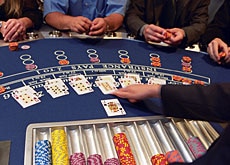 Casinos aim to take the pain out of gambling

High stakes and high society – casinos may have a glamorous image but they can lead to ruin for those who end up addicted to gambling. Five years ...

The weak euro is creating problems for Swiss casinos – and particularly those in Italian-speaking Ticino, which has the highest concentration of ...

Photographer Daniel Schwartz takes a look at money and its allure. Money makes the world go round. Schwartz looks at money as a physical and ...

Around 100 pupils have written a play about addiction, which they're performing on several stages in canton Bern. The aim of the project is to ...