After the war, in order to safeguard banking secrecy, Swiss banks refused to release details of dormant accounts held by Holocaust victims. This led to the government setting an independent commissionexternal link of experts led by historian Jean-François Bergier to investigate specific aspects of Switzerland’s wartime behaviour. The work began in 1996 and took five years to complete.

It concluded that Swiss officials "helped the Nazi regime achieve its goals" by closing the country's borders to thousands of Jewish refugees, effectively sending them back to near certain death. During the war, a total of some 300,000 people crossed the borders from Nazi-occupied countries. Of the civilian refugees, around 30,000 were Jews. However, an estimated 24,500 civilians, mainly Jews, were turned away.

The commission played down the theory that government actions against refugees were dictated by the country's isolation in the middle of Nazi-occupied Europe. In 1942, the Swiss authorities definitely closed their borders to refugees fleeing "only for racial reasons", it found.

The Swiss government welcomed the report and, in 1999, repeated a formal apology offered to Jewish people in 1995.

In 1998, Swiss banks UBS and Credit Suisse reached an agreement with the World Jewish Congress in a US lawsuit filed in 1995 in New York. The banks agreed to pay $1.25 billion (CHF1.16 billion) to victims of the Holocaust or their heirs.

Of that, $800 (CHF770) million was earmarked for repayment to people whose money had remained in Swiss bank accounts after the war. Another $425 (CHF409) million was designated for Holocaust survivors, refugees turned away at Swiss borders, and people detained in Switzerland to perform forced labour.

Archive documents from September 1942 show how the government’s policy of turning away Jews at the Swiss border was controversial at the time. 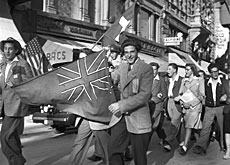 Swiss look back on a tarnished wartime record

On the 60th anniversary of armistice day, swissinfo asks historian Jean-François Bergier if Switzerland has come to terms with its wartime past. ...

A chapter of Swiss history has been rewritten, clearing the names of people who helped smuggle refugees into Switzerland during the Second World War.

The Swiss and French who defied the Nazis by smuggling weapons, microfilm and Jews finally have a memorial in their honour. 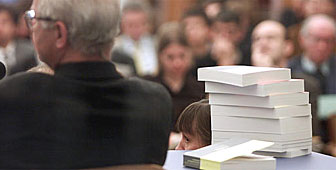 The new reports on Switzerland's actions during the Second World War could change the traditional version of Swiss history. Until the mid 1990s ...

Escaping the Holocaust Memoirs of a counterfeiting hero

Thanks to his counterfeiting talents, Cioma Schönhaus helped hundreds of Jews escape certain death in the Holocaust. He published his story in ...