Edward learned he was intersex at age 16 – a diagnosis that changed his life. After years of what felt like a nightmare, he’s learned to accept himself, but he often feels misunderstood. He wishes doctors had taken him more seriously from the start.

Somewhere between man and woman. Hate and love. Passion and despair. Long torn by these contrasts, Edward bewilders the people he meets. With his hard shell and soft centre, he struggles to be understood in a society that has trouble accepting what is different.

With his tattoos and piercings, Edward sits with his mother Kate in the living room of his family home – complete with a breathtaking view of Lake Geneva. Above his head, old black and white portraits of relatives seem to lend an ear to his story.

“You’re a mutant. You’ll never be able to have children or live a normal life.” These were the words of Edward’s doctor when he told him about being intersex. Edward was 16. He was sitting alone in the doctor’s office at the time.

At 33 he is still haunted by the doctor’s words. His voice quivers with anger at the medical professionals who could neither support nor protect him. Edward and his mother feel he was treated like a freak of nature rather than a young patient who needed help.

When he was born in 1984, there were no indications of Edward’s unusual gender issue. But in his mother’s eyes he was always a “different” child. The school years of her troubled little boy were chaotic right from kindergarten.

“At ten he was diagnosed with attention deficit disorder,” his mother recalls. Edward was expelled from two schools, then sent away to a boarding school.

Around the age of 12, Edward’s situation got a lot more complicated. He was growing, and like his peers he was waiting impatiently for facial hair and a deeper voice – elements of a man’s body. But nothing happened. Worse still, his body did the opposite.

“My hips started looking feminine and I was growing breasts.” This was a traumatic experience for the youth. “At college I wouldn’t shower with the others. I felt neither male nor female. I felt myself to be nothing.”

Insult was soon added to injury. “I was called a dirty faggot.” This is an insult that Edward no longer tolerates, not just because he does not want to hear homosexual friends denigrated, but because it expresses the whole lack of understanding about intersex. “Given that the term [intersex] includes the word ‘sex’, people think it means I’m gay. But being intersex has nothing to do with sexual orientation!”, he points out, raising his voice till it almost reaches a shout. Then he recovers. “Sorry, but you really need to understand.”

He was 16 when doctors finally determined that Edward was affected by Klinefelter syndrome, which is one of a number of chromosomic sexual anomalies. Edward was XXY instead of the usual XY for men. In other words, he had an extra chromosome, and his body did not produce enough testosterone to get through the puberty stage. The doctors prescribed monthly hormone injections.

“It’s quite a painful process. They inject a fluid into the base of your spine, but it takes a long time to get into your system because it’s oily. I could do nothing for the rest of the evening, or even for a whole day afterwards.”

To reduce the side-effects, his doctor decided to replace the injections with a patch, which was less drastic as a treatment, but also less effective.

“I could see no progress at all. In the meantime, I met a girl who was very understanding and told me she accepted me as I was and that I didn’t need testosterone.” Edward was convinced by this and quit the treatment. But this decision was the start of a dark period for the young man.

Between the ages of 16 and 23, Edward passed through a terrible identity crisis. “Without testosterone I was like a child of ten inside my head: I would just blow up without thinking of the consequences. I had no limits,” he recalls. He had a total lack of self-confidence, and ill-feeling and aggression caused him “no end of problems”. He felt consumed with hate. “I saw everybody as an enemy – even my mother – but all this anger also helped me to survive.”

When hate becomes a reason for living, it isolates the person who feels it. Between the young man, his family and friends there was a painful break. “They were dreadful years. Edward no longer knew who he was. Sometimes he came to me, dressed as a girl and asked me: ‘Mom, what am I?’” recalls Kate. As his mother, she felt alone, helpless and unable to find the support she needed from doctors or psychiatrists, who tried in vain to explain her son’s state of mind with psychological diagnoses. “It’s terrible when your son keeps saying he wants to commit suicide,” she says simply.

Confused by the whole chain of events, Kate started looking for information on intersex, and decided to study and write a thesis on the experience of mothering a “different” child. She found out about the mental impact of a lack of testosterone on the brain of a man, and became convinced that her son should resume the hormone treatment. “After long arguments, yelling and crying, I finally gave in. It was mainly the risk of osteoporosis that convinced me,” says Edward.

For the young man, it turned out to be a kind of liberation. Thanks to the testosterone, Edward experienced all the usual effects of puberty at age 23. His body changed: muscle mass developed in the neck and shoulders, his voice became deeper. But most of all he became more relaxed. “What a relief it was when I finally could become an adult,” he recalls. For his mother it was also a liberation: “The sexual hormones facilitate the development of the cognitive side. Now he understands the consequences of his actions much better.”

The years of seeking have strengthened the bond between Edward and his mother, who has founded an association called SAMEDexternal link. This is a support group for mothers of “different” children. “My story is her story, too. It has allowed us to build ourselves a set of defences,” remarks Edward.

Asked about how he sees his future, Edward replies without hesitation: “I see none.” Like everyone affected by Klinefelter syndrome, he is sterile. This is a condition which bothers him.

“I have the feeling that not being able to have children puts an end to any relations with women.” The young man accordingly seeks other outlets – he is thinking of travelling to Costa Rica and has a strong interest in photography.

Edward has the letters XXY tattooed on his arm. This is the proof that now he can accept himself for being intersex. He can even see positive aspects to it: “I feel like a man and a woman at the same time, in terms of my physique and my choices. My strong decisions, for example, come from my feminine side. My weakness is more linked to my body, the masculine side.”

“I am the master of my fate; I am the captain of my soul.” The quote from “Invictus” is written in black on his chest. “Hatred no longer reigns supreme. It is still there, but I have learned to control it.”

There are things which take his mind off the problems – in particular, his interest in “fixies” – urban fixed-gear bicycles. “The tattoos help me to accept my body. The bike helps me to control my emotions.”

In Switzerland each year, about 40 children of indeterminate sex are born. At times, variations in sexual differentiation are not visible at birth, only becoming apparent later on.

If the child’s life is at risk, doctors perform an immediate medical intervention. In other cases it is not clinically justified. In the past, many children were operated on so as to assign them a sex right from birth. These operations were often carried out without consulting the parents and had irreversible consequences. Since the 1990s, studies have shown that children operated on at birth may experience serious physical and mental after-effects when they reach adulthood.

The medical profession has begun to change its approach to intersex persons, but in Switzerland there is no legislation on the topic. In 2016, following the publication of a report by the national advisory commission on biomedical ethics, the Swiss government stated that premature or unnecessary interventions were a violation of the right to security of the person.


Translated from French by Terence MacNamee

Boy or girl? Study looks into treatment of intersex children

From the 1950s children born with no clear biological gender were given surgery or hormones. A Zurich study will look into this dark chapter of ...

A child who is born neither a girl nor a boy has it tough from the start, and deciding on your gender is even more difficult when you don’t know ...

David Leuenberger dreams of getting married and one day having children, but under current Swiss law, same-sex couples do not have these rights. 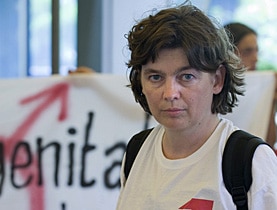 It's a boy! It's a girl! But what happens when life doesn't fit in with greeting cards and the defining moment of childbirth becomes a bewildering ...