The Swiss-based food multinational, Nestlé, says it has received $1.5 million (SFr2 million) from Ethiopia as settlement of a long-standing dispute.

It said the money was being divided among three charities active in Ethiopia, and half of the sum had already been paid out to the Red Cross and Caritas.

According to Nestlé spokesman Marcel Rubin, the Ethiopian government paid up the damages in two instalments, in March and October. The second instalment was being donated to the United Nations refugee agency, he said.

Nestlé said in December last year it would pass on all the proceeds from its claim against the Ethiopian government to famine relief in the country.

The Swiss firm had come under fierce criticism from aid groups, which said famine-struck Ethiopia could ill afford to pay the damages.

But Peter Brabeck, Nestlé's CEO, said the company was "not interested in taking money from Ethiopia when it is in such a desperate state of human need".

"We will therefore devote any money received from this settlement to both public and private efforts to relieve hunger in Ethiopia. This will take the form of both short-term relief aid and longer term food security."

Nestlé initially sought $6 million in damages from the Ethiopian government over a company that was nationalised in 1975.

Despite pressure, it refused to give up its claim, saying it was a matter of principle.

“We are adamant on the principle that if property is expropriated, the state has to pay fair compensation for it,” spokesman François Perroud told swissinfo last December.

The company later accepted an Ethiopian government offer of $1.5 million to settle the claim.

Nestlé says it has received $1.5 million dollars from Ethiopia as compensation for a factory which was nationalised in 1975.

The food giant says half of the money has already been handed over to two charities in Ethiopia - the Red Cross and Caritas - for famine relief.

The other half is destined for the UN refugee agency.

Nestlé came under fire at the end of last year for demanding $6 million in damages from Ethiopia when the country was struggling to combat famine. 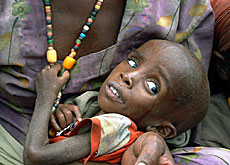 Swiss food giant, Nestlé, says it will pass on proceeds from a claim for damages against the Ethiopian government to famine relief. Struggling to ...