The Swiss parliament has officially elected Ueli Maurer as the new president for 2013. The defence minister is a member of the rightwing Swiss People’s Party. The post of president rotates annually among the seven cabinet members.

The 62-year-old received 148 out of 202 votes in the parliamentary presidential election on Wednesday. Foreign Minister Didier Burkhalter will be his deputy.

Maurer, who takes over from Conservative Democrat Eveline Widmer-Schlumpf, was backed by all parliamentary groups except the Green Party. Opposition from the centre-left Social Democratic Party did not transpire.

The party had indicated in summer that they might sanction the defence minister for lack of collegiality within the seven-member cabinet which he joined in December 2008. Maurer, former president of the rightwing Swiss People's Party, replaced outgoing minister Samuel Schmid.

Faithful to his party’s hardline policies, Maurer is against closer ties to the European Union. His political opponents also say he is hostile to working women and immigration and is not afraid to put across his opinions.

The president’s post is largely ceremonial. Maurer will lead government meetings and represent the country abroad on state visits. While still pursuing his ministerial activities, he is considered first among equals for a year and does not defer to the other ministers during that time.

After 12 months as the country’s leader, the president then hands over the reins to the next in line, who will be Foreign Minister Didier Burkhalter in 2014.

Under the Swiss constitution, responsibility for foreign policy is not restricted to one specific ministry. Instead, the entire government has a say in how foreign relations play out.

Maurer has said that he will hand over certain foreign visits and responsibilities to Burkhalter where it makes sense so that the foreign minister can build up international contacts.

Elected for a one-year term from among the seven members of the cabinet, the president is a "primus inter pares" (first among equals). The president chairs government meetings and takes on some representative functions, but there are no additional powers to the office.

The Federal Assembly (members of the House and Senate) gather during the winter parliamentary session to elect the president and vice-president for the following year. This year, the election is being held on December 5.

The position of Swiss president changes yearly, rotating through the cabinet ranks. Attempts to extend the term limit to benefit foreign relations ...

The government and the Swiss armed forces want to buy a new fighter jet: the Swedish Saab Gripen. However, diverging opinions on the mission of ... 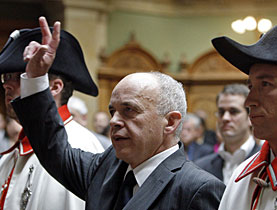 The head of the Zurich section of the rightwing Swiss People's Party, Ueli Maurer, has been voted by parliament into the seven-member government. ...

The office of federal president rotates every year among the seven cabinet ministers.

A short history of the Swiss cabinet since 1848. The Swiss government today reflects not only the political forces but also the different regions ...