The Swiss often claim to have one of the most inexpensive parliaments in the world. But how do Swiss politicians fare financially compared with other countries? swissinfo.ch did a quick investigation.

The issue of parliamentarians’ salaries and how they make a living is a regular talking point. Recently, Zug senator Joachim Eder suggested that parliamentarians should no longer be paid an accommodation allowance if they are not actually away from home when they are attending a legislative session. A few months earlier, parliamentarian Hans Grunder filed a parliamentary initiativexternal linke – not yet debated – in which he called for terms of office to be limited to prevent the legislature from gradually becoming “a parliament of professionals”.

Over the past few decades, while remaining part-time – organised so that members can exercise other jobs in parallel – the Swiss parliament has become much more professional. On average, election to the House of Representatives now carries a minimum workload of 50%, or 70% for the Senate.

The pay systemexternal link for Swiss parliamentarians allows anyone who wishes to focus exclusively on politics without much worry about having enough money at the end of the month. Every politician receives an annual salary of CHF26,000 ($26,806), to which is added a daily allowance of CHF440 for every day the house, its committees or parliamentary groups are sitting. On average this daily allowance means an annual sum of not less than CHF40,000 for every representative*. In other words, without even counting reimbursement of expenses, a Swiss parliamentarian has an annual pay of about CHF66,000 (or €60,000).

Is this a lot? Or not much? Actually, it ranks close to the average salary in the country – €50,300 in 2014, according to OECD dataexternal link. But Swiss politicians earn a lot less than some of their counterparts in other countries. In Italy, an elected member of the Chamber of Deputies has a fixed salary three times the size of his or her Swiss counterpart. Between allowances and expenses, an Italian deputyexternal link can gross more than €165,000 a year, while an ‘ordinary’ citizen has an average salary five times lower (€30,600).

If you compare average salaries with those of parliamentarians, the best-off politicians are the Brazilians, who earn ten times more than the man on the street. Spanish politiciansexternal link are a notable exception, their fixed remuneration being just about the same as the earnings of the average Spaniard, and the lowest in Western Europe.

With extras, salary may double

Parliamentary salary is just one component of politicians’ pay cheques. Taking account of the various expenses reimbursed – impossible to sum up in a chart, the systems vary so much between different countries – their annual pay may as much as double.

This is the case in Switzerland. Owing to allowances for meals, accommodation and travel, as well as an annual allowance of CHF33,000 to cover costs of staff and materials, an elected representative manages to earn at least another €50,000 a year, for a total amount of €110,000. This holds true even if he or she does not hire a personal assistant. The allowance is paid as a lump sum, no receipts being required, unlike in other countries.

In Italy, every parliamentarian gets up to €62,000 a year to cover expenses. Apart from reimbursement for costs of staff (requiring receipts, but only 50%), telephone and transfer costs, Italian deputies have a pass for free rail, sea and air travel within the country, and perks like a free hairdresser (or hairdressers – there are actually four of them) working in the parliament building.

The Germans, French and British don’t do badly, either. In Germany, every Bundestagexternal link member gets €52,000 a year as a lump sum reimbursement of expenses, and €250,000 a year to cover staff salaries. Unlike Italy, the administration of the Bundestag pays these salaries directly, not the deputy. In Franceexternal link the allowance to cover politicians’ costs is worth some €70,000 a year, while for staff they can get €114,000. And, of course, free first class train travel and up to 80 flights within France.

In Britain, apart from a lump sum payment for expenses of €14,500 a year, each member can claim all expenses to do with parliamentary work. On average, this comes to €115,000 a year. Britain is now one of the most transparent countries on this score: all the expense claims from every member of parliament can be seen on a websiteexternal link. The British government was forced to take action in 2009, after a press investigation exposed dubious use of taxpayers’ money by members of the House of Commons.

This transparency is also the rule in the USexternal link, but it does not stop American politicians from being first when it comes to reimbursement of expenses for staff, travel and supplies. Apart from their annual salary of €153,000, representatives can afford to spend lavishly: in 2012, every member received on average €1.15 millionexternal link. So compared to their counterparts abroad, the 246 members of the Swiss parliament have some way to go before they can be denounced as big spenders.

* For the international analysis we took into consideration only members of lower houses and not senates. We did not take account of additional offices held by elected politicians: in some countries a party leader in the house gets higher pay than an ordinary member.

All members of the European parliament external link get the same pay, according to a provision since 2009. A Bulgarian member gets the same salary as a British member, although the cost of living is quite different in those two countries.

Furthermore, the European parliament pays a lump sum of €306 for a day’s attendance and reimburses travel claims against receipts.

Defence Minister Guy Parmelin is facing criticism of the lack of transparency over parliamentary plans to exempt certain land sales from taxes. ...

Switzerland has been ranked number one for financial secrecy for the third consecutive time in a biennial index published by the Tax Justice ...

Lobbying has become a growth industry in the halls of Switzerland’s parliament. Its scope and complexity are even opening the door to foreign ... 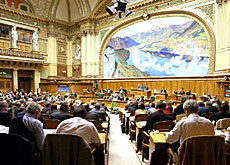 Switzerland’s House of Representatives is very cost-effective compared with parliaments in other industrialised countries. A study of 20 ...