When it comes to Russian history, Switzerland might be most remembered as the place where Lenin took refuge before returning home to lead a revolution. But the two nations share a surprisingly rich history. Here’s a round-up of ties linking them.

Already in 1667, the Republic of Geneva and Moscow’s foreign ministry were doing official business together. Thanks to its academic reputation, Geneva was a hotspot for Russia’s high society. Zurich-based Russian author Mikhail Shishkin cites “the strict customs in Calvin’s city, the deep knowledge of its professors and the easy-to-understand local language” as key attractions for the Russian aristocracy.

According to Thurgau historian Rolf Soland, in 1817 Czar Alexander I sent 100,000 roubles to badly-hit eastern Switzerland when he heard about the Swiss famine. He gave Canton Glarus 66,000 roubles to improve the soil and help the impoverished people there. Soland’s account appears in his book “Johann Conrad Freyenmuth (1775-1843) and his diaries”.

The start of the Second World War in 1939 put Switzerland into a difficult new position – both politically and economically. Securing supplies for the country gave Switzerland a reason to pursue more active trade relations with the Soviet Union. After five weeks of tough negotiations, the two nations signed a trade agreement on February 24, 1941. In particular, Switzerland wanted to export its machinery, while the USSR wanted technical assistance for its watch industry. Both goals were achieved successfully. The outbreak of the German-Soviet War on June 22, 1941 effectively rendered the treaty inoperative, but it was never cancelled.

Before the revolution When the Swiss emigrated to Russia

While it could be said that the Russian Revolution was initiated from Lenin’s exile residence in Spiegelgasse 14 in Zurich, an exhibition at ...

4. From Lenin to Khodorkovsky: Switzerland as a place of refuge

Switzerland’s neutrality and liberal-democratic structure made it a refuge for those seeking political asylum in the 19th and 21st centuries. Vladimir Ulyanov, called Lenin, wrote his April theses in Zurich’s central library. Solzhenitsyn lived in Switzerland for two years, as did another Kremlin critic and oppositionist: Mikhail Khodorkovsky.

The state visit of former Russian President Dmitry Medvedev in 2009 was the first official visit from Russia to Switzerlandexternal link. No Russian czar, secretary general, or president had ever honoured Switzerland with a state visit. Medvedev wanted to discuss and promote the idea of ​​international cooperation in the field of European security with the Swiss government. “Our idea is to create a universal platform where everyone is included,” he said.

• Bern’s Museum of Fine Artsexternal link, with the support of Zentrum Paul Kleeexternal link, is hosting an exhibition entitled “Revolution is dead! Long live the revolution”, which treats revolution as an aesthetic phenomenon.
• At the Swiss National Museumexternal link in Zurich, the exhibition “1917: Revolution, Russia and Switzerland” focuses on the two countries’ joint history of complex interdependence in the era of Russian revolutions.


Translated from German by Susan Misicka

Opinion Why Switzerland and Russia need each other

What do Fyodor Dostoevsky and Vladimir Lenin have in common? Not much. But they did both hate Switzerland.

Lenin, the father of the Russian revolution, worked on his theories for a popular uprising while living in Switzerland. 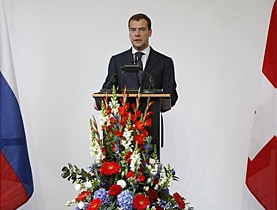 Switzerland's role as an international mediator and as a major financial centre has been praised by the Russian president, Dmitri Medvedev. He ... 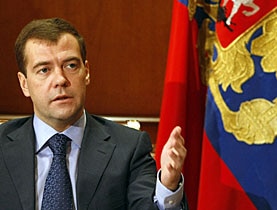 Switzerland is gearing up for the arrival of Russian President Dimitri Medvedev next Monday – the first-ever official visit by a Russian leader. ...

Giant of 20th century Russian literature, gulag survivor and exile, Alexander Solzhenitsyn is a compelling subject for an exhibition. At the ...

Author Diccon Bewes kicks off his video blog series for swissinfo.ch by visiting Lenin’s former Zurich home. Bewes is the author of non-fiction ...