Parliament has approved a proposal to ban the long-standing Swiss tradition of keeping army ammunition at home.

With the exception of a few thousand of the 120,000 soldiers in Switzerland's militia army who keep their cartridges at home, all army ammunition will have to be stored in central arsenals. Army guns can still be kept at home.

The House of Representatives on Thursday followed the Senate in backing a motion that will allow around 2,000 specialist troops, such as those guarding airports and other important installations, to continue to store their ammo in their cellars and attics.

The government will also be able to lift the ban in the event of a security crisis.

Defence Minister Samuel Schmid, a member of the rightwing Swiss People's Party said he was ready to implement the motion. He had previously argued that Switzerland's militia army needed to be able to mobilise rapidly "to protect airports and railway stations".

But Schmid defended the importance of keeping army guns in private households.

Ulrich Schlüer, also from the People's Party, meanwhile insisted guns and bullets were an inseparable unity and that in a militia system it was essential to be able to quickly call on troops who were not in service.

He added that handing out ammunition was an act of trust in the soldier.

Also hotly debated in the House of Representatives was a people's initiative launched by the centre-left Social Democratic Party and pacifist organisations to ban the estimated one-and-a-half million military weapons from Swiss households.

The initiative called for army weapons to remain in the barracks, a national gun register, a ban on private individuals buying or owning particularly dangerous guns such as automatic weapons or pump-action shotguns, and tighter controls on those who say they need to carry a firearm.

The anti-gun supporters argued that it was no longer necessary from a military point of view to keep army munitions at home. They also said it was a question of safety, as experts claim around 300 deaths every year are caused by army weapons, which also play a role in domestic violence.

But speakers from the People's Party and the centre-right Radical Party saw the decommissioning as a weakening of Swiss security and as a vote of no confidence in soldiers, adding that the number of abuses with guns was "extremely small".

All able-bodied Swiss men aged 20-30 are conscripted for about three months and issued with a rifle.

After initial training, they are required to do three or four weeks of army service a year until they have served a total of 260 days or reached the age of 34. Throughout this time they keep their rifles and 50 rounds of ammunition at home.

Five years ago Switzerland was stunned when a gunman shot and killed 14 people in Zug's cantonal parliament with a rifle, before turning the gun on himself.

Debate on the use of firearms was further fuelled in April last year when the husband of former women's ski champion Corinne Rey-Bellet killed his wife and her brother with his army pistol.

Estimations of the number of firearms in circulation in Switzerland range upwards from 1.2 million.
Army-issue weapons are said to be involved in the deaths of more than 300 people in Switzerland every year.
According to Ipsilon Suicide Prevention, 34% of suicides among men are due to firearms, compared with only 3.7% of female suicides.
In April a survey found that 65.6% of citizens would vote to ban army weapons from the home, 69% were in favour of a national gun register and 37% said a ban on storing army weapons would prevent family tragedies. 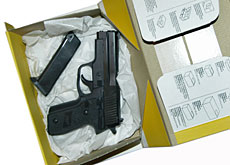 Parliament gets tough in weapons debate

The Swiss Senate has approved a revised law on weapons which forbids the carrying of dangerous objects and the anonymous purchase of arms over the ... 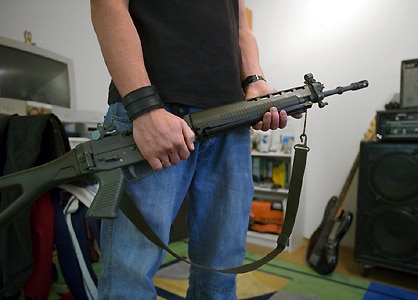 A survey shows a majority of the Swiss want to ban army weapons from homes – scrapping a long-standing tradition of the country's militia army. ...

A rite of passage for young Swiss.