Terror attacks abroad, rightwing policies and a biased media are all reasons why Muslims increasingly seem to have a bad image in Switzerland, a report has found.

In particular the debate surrounding the national minaret vote of 2009 – in which the building of minarets was banned – was revealed to have had a negative effect.

The study, part of the Religions, the State and Society programme at the Swiss National Science Foundation, examined the observation that people considered all migrants of Islamic faith collectively as a Muslim minority and labelled them as extremists, even when they were not.

The authors found that terror attacks from 2004 onwards such as in Madrid and London had strengthened the idea that there was a “clash of civilisations” between the West and East.

In addition, the rightwing Swiss People’s Party had increasingly referred to the religious background of Muslim migrants in their campaigns, especially on controversial posters. This had been criticised but a real debate had not taken place, the study found.

Particularly negative and one-sided was media reporting of Muslims during the minaret debate. For example, although all other main political parties were against the ban, they received a third less coverage than those in favour, which included the People’s Party.

The authors concluded that the media had not managed to communicate a balanced discussion on the issue.

Swiss newspapers have all welcomed the death of Osama bin Laden, but they also warn that the battle against Islamic terrorism is far from won and ... 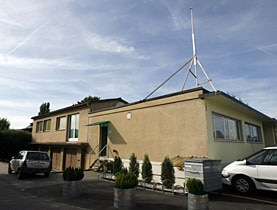 After Switzerland's vote to ban the construction of minarets, a plan to build such a tower in the town of Langenthal could provoke an ...

Minaret ban stays in media focus - one year on