What does it take to produce gold sustainably? It’s not easy, as a visit to a Peruvian mine joining the Swiss-backed Better Gold Initiative (BGI) shows.

The street-side calls to enter business locales in the Peruvian town of Juliaca felt distantly akin to restaurant hawkers found in tourist resorts around the world, except that the salespeople are traders trying to lure sellers of gold from the many informal mines in the southeastern region of Puno, and beyond.

Little of the trading taking place here is legal, following Peruvian legislation or any number of international environmental agreements such as the Minamata Convention on Mercuryexternal link, and associated crime is rife in this town.

Asking too many questions about the source of gold purchased here is therefore not well received.

“If others find out that you are here and asking questions, they will lynch you,” a trader warns.

From alpaca herders to open-pit miners

Some 150 kilometres away in Ananea, at the altitude of 4,700 metres, much of the mountainous landscape has been stripped bare, excavated right across the vast formerly grassy highlands in the scramble for the valuable mineral.

This is the site of CECOMIP, a legal mining cooperative started in 2006 by members of the local community who previously lived from alpaca herding.

The miners, drawn by a boom in gold prices, began excavating under their ancestral lands in search of the mineral and brought trucks and excavators to accelerate and facilitate the pursuit.

housands of other miners who migrated to this region from other areas had similar plans, breaking ground nearby. With 22% of Peru’s population living under the poverty line, mining has its draws.

Claudio Mara, a miner at the operation, would have earned roughly $400 annually from his 50-alpaca herd. Mara and his colleagues are soon expected to become the latest partners in the Better Gold Initiative (BGI), launched in 2013, after news reports linked Swiss refiners to gold that was illegally sourced from the southern region of Madre de Dios.

A public-private partnership, the initiativeexternal link, now produces 700 kg of gold annually. That figure, while much greater than the 25 kg produced after the initiative’s launch, is still a fraction of the annual 2,700 tonnes mined globally, some 70% of which transits through Switzerland.

The CECOMIP site produces approximately 4.5 kg of the mineral per month.

The Swiss initiative encourages sustainable, environmentally and socially responsible production of the mineral.

Guillermo Medina, the programme’s national coordinator, said the programme offers bonuses to certified miners that can be used for social and environmental improvements. Geneva-based investment manager Impact Finance http://impact-finance.com/external link , for instance, has advanced credit worth several hundreds of thousands of dollars to Sotrami, one of the mining cooperatives the programme buys gold from.

The BGI provides direct markets to miners, who would avoid having to sell through traders who take 5-6% off the international price. For the miners in Ananea, the initiative’s conditions have their appeal.

“For us, it is important that our product can be recognised locally, nationally and internationally, with the best conditions for going to the market,” said the cooperative’s president, William Yamparra.

At the mine, workers explain how only a couple grams of gold is generally extracted from a truckload of soil excavated from the nearby open pit, some 30 metres deep. Here, as in Madre de Dios, gold is found in alluvial deposits, meaning that scattered pieces are found along riverbeds, as opposed to within geological veins.

Better Gold Mining for gold as a cooperative

The head of operations at CECOMIP explains how his Peruvian mining cooperative extracts gold through environmentally and socially responsible means.

At the amalgamation site mercury is used in the last phases of production before being recycled. This is one of several elements distinguishing CECOMIP from illegal mines where mercury is used liberally and little care taken to avoid polluting subsoils, waterways and the air.

In Madre de Dios alone, Peruvian officials estimate some 40 tonnes of mercury is dumped into Amazonian river per year.

In Ananea itself, illegal mining is widespread. Even part of CECOMIP’s 74 hectares was occupied by illegals at some time. Indeed, outside the mine, just a few hundred metres away, swissinfo.ch saw workers hauling pipes to a nearby lagoon, where water was being extracted and re-deposited for use in illegal mines.

The cost of being legit

The cost of setting up the amalgamation site at CECIMIP was not cheap.

Gerardo Smith, head of security and technology at the mine,

estimated total costs involved in complying with the national legalisation process, a prerequisite for accessing the BGI – at roughly 500,000 soles ($150,000), a hefty sum for the poor workers, who did not have access to loans.

Administrative transactions, including validation of titles to exploit land concessions, environmental certificates and even archaeological authorisations, added to expenses and bureaucratic delays.

As a result, workers here, like many of the other 100,000 miners in Peru, said they felt unfairly treated by national authorities.

“We would like to see doors opened just the same as medium and large scale miners, with access to credit,” Andres Cotrina, the cooperative’s head of operations said.

Hentschel, BGI’s director, admitted that legal requirements in Peru, as well as “economic reasons”, were the greatest impediments to the small miners interested in joining the initiative.

Fidel Huisa Mamani, a mining engineer who advises miners in this southern Peruvian province, said that of 11,500 miners in the southern region of Puno, only ten have been given formal authorisation since 2013.

“Now it is about scaling up,” Hentschel said. He was hopeful that more mines in this region will join the initiative.

Next year, the Swiss programme is expected to expand into Bolivia and Colombia, in addition to adding other Peruvian mines, he explained.

The Better Gold Initiative is a public-private project supported by the Swiss Better Gold Association (SBGA)external link - a private sector group that includes major Swiss refiners Metalor, PAMP, Argor-Hereaus and Valcambi as well as jewellers and watchmakers Cartier and the Swatch Group –and the State Secretariat for Economic Affairs (SECO).

Peruvian mining cooperatives Sotrami and MACDESA, located on the Peruvian coast, are the two certified producers fully involved in the initiative to date. Thomas Hentschel, the director of BGI told swissinfo.ch that CECOMIP, as well as CECOMSAP, another mine in the southern region of Puno, are expected to begin supplying the project within the next couple of months.

The initiative “aims at assuring that artisanal and small-scale miners would constitute an engine for generating better living conditions and sustainable development”.

BGI provides direct markets to miners, who would otherwise have to sell through traders who take 5-6% off the international price.

Unlike other commercial agreements, BGI offers bonuses to certified miners that can be used for social and environmental improvements.

Switzerland is facing pressure to tighten up regulations on its fast-growing raw materials trading sector. The authorities and campaigners agree ...

A Swiss co-founded initiative aimed at revolutionising cocoa production in Peru, is empowering farmers and turning them into entrepreneurs. 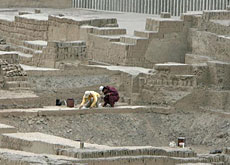