The Swiss president, Pascal Couchepin, on Thursday joined festivities in Paris commemorating the 200th anniversary of a landmark treaty between the Swiss Confederation and Napoleon.

The Act of Mediation in 1803 ended five years of French rule and laid the foundations for modern-day Switzerland.

Couchepin headed a delegation of around 60 Swiss representatives who participated in a grand ceremony, accompanied by Napoleonic hymns, at the Senate Chamber in the French capital.

Prior to the ceremony, the French senate president Christian Poncelet greeted Couchepin in the Palais de Luxembourg, ahead of a banquet.

Couhcepin told the Senate that the Act of Mediation was proof that neighbouring countries could not be indifferent to each other's needs.

"It's a celebration of a politically wise act," said Couchepin.

"The Act of Mediation was an inspired move which brought peace to a divided Switzerland."

Several speakers, including the president of the Swiss House of Representatives, Yves Christen, marked this tumultuous time in Swiss history.

French troops invaded federalist Switzerland in 1798 - a decade after the French Revolution - and penned a new constitution intended to replace the system of privileges and communities that had existed since the Middle Ages.

But the Swiss rejected Napoleon's new order and a series of coups d'états aimed at ending French rule persuaded him to withdraw his troops in 1802.

Civil war then broke out and the French emperor stepped in as arbitrator, urging the Swiss to draw up a new constitution.

However, Couchepin revealed to swissinfo that he was no fan of Napoleon, despite the important role the French emperor played in Swiss history.

Asked who he would like to meet if he could go back 200 years, Couchepin said it would certainly not be Napoleon Bonaparte.

"It was an era of desolation and war. As for Bonaparte, he was no democrat. I prefer the current situation," said the Swiss president.

The ceremony in Paris marking the historic treaty also testified to the "centuries of friendship shared between Switzerland and France", noted Couchepin.

Far from being merely a symbolic trip, the Swiss president also saw it as an opportunity to celebrate French and Swiss cooperation.

"For this reason, parallel to the ceremony, we also held meetings with several ministers, notably with the French prime minister, Jean-Pierre Raffarin," he said.

On the agenda was the growing concern about a possible conflict in Iraq.

On Wednesday the Swiss cabinet warned the United States and its allies not to attack without a mandate from the United Nations Security Council - a move in line with French policy.

The Swiss government also rejected a request from Washington to allow military flights over Switzerland.

The two leaders also discussed the upcoming G-8 summit in the French town of Evian on Lake Geneva.

Switzerland will be on a high state of alert during the June meeting and has already announced plans to call up 4,500 troops to maintain security.

Napoleon Bonaparte was born in 1769 in Corsica.

The French army invaded Switzerland in 1798.

February 18, 1803: Napoleon and Switzerland signed the Act of Mediation, defining France's role in the country.

In May 1804: the French Senate proclaimed the French Empire, following successful battles across the European continent.

By 1810, the French empire had almost complete domination of Europe.

In 1814, Napoleon was deposed by the Sénat, following a number of military defeats. Louis XVIII claimed the throne and Napoleon was exiled to the island of Elba.

Later in 1814, Napoleon, in an attempt to reclaim the French throne, was defeated in the Battle of Waterloo.

He was exiled to the island of Saint Helena, where he died in 1821. 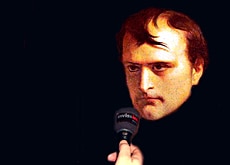 This week marks the 200th anniversary of a landmark treaty between the Swiss confederation and Napoleon, which ended five years of instability ... 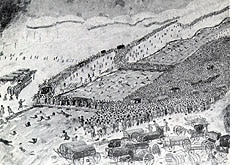 The Swiss Development Agency (SDC) has helped to build a monument in Belarus to remember those killed at Berezina during Napoleon's retreat from ...