Palestinians returning from a shopping trip are more likely to be carrying home a basket full of Israeli produce than local goods.

Around one-third of the West Bank is farmed, yet most meat, fresh fruit and vegetables are imported because the quantity of local produce is insufficient and many people do not trust the quality.

A Swiss-sponsored project is for the first time bringing together producers and retailers to try to change the negative perceptions of Palestinian products and help farmers raise their share of the local market.

swissinfo.ch attended an official ceremony in Ramallah in December for the launch of the In Tajuna (Our Production) project, at which the Palestinian minister of agriculture, Ismail De’aq gave the keynote speech.

De’aq outlined two main problems faced by the agriculture sector: lack of water and inadequate marketing. While In Tajuna cannot help with the former, it can help producers promote their goods through targeted advertising and branding.

Once the goods are packaged, a quality seal – a white triangle with red outline – will help consumers identify local produce that complies with high food safety and hygiene standards.

“The pilot phase of the project concentrated on promoting Palestinian consumer goods in the local market. The message was, ‘buy Palestinian because it’s good for you, your health, the economy, and by doing that you will not be buying Israeli products, which are really on all shelves in Palestine,” explained Giancarlo de Picciotto, the head of the Swiss Agency for Development and Cooperation Office in Jerusalem.

But this was not enough, de Picciotto said, because when people were asked why they would rather buy foreign products the answer was always that the quality was better, there was an expiry date and you could read the nutritional values on the labels. In short, there were standards.

“So the answer to that is, ok maybe producers and consumers should be brought together in order to assess what is really expected by the Palestinian consumer so that the producers can match this demand. That is the philosophy of the project,” he added.

Six cooperatives and three private agricultural companies signed up to the project at the ceremony in Ramallah. Directly beforehand swissinfo.ch had the chance to visit one of the cooperatives.

The fertile lands of Jiftlik lie in the central Jordan Valley near to the ancient city of Jericho, where Joshua fought his famous battle recorded in the Bible.

Approaching the village from Jerusalem you come close to the lowest point on Earth - the Dead Sea, which marks the border with Jordan. The landscape is rocky and barren and the air smells sulphurous. A sign at the side of the road indicates that we are at 300 metres below sea level. Then the road rises and green fields come into view.

This area is the bread basket of the West Bank and traditionally an important exporter of fruit and vegetables. Blazing hot in the summer, the main planting and harvesting time is from September to June.

Where two large trees mark the turn-off, a dozen or so men, smartly dressed ahead of the signing ceremony, sit in a circle in front of farm buildings. The fields round about are yellow with ripening squash.

This is the Cooperative of Agricultural Land; Jiftlik. Collectively the 200 farmers cultivate 30,000 dunums (one dunum equals 1,000 square metres) of land, producing tomatoes, squash, cucumber, aubergines, and all colours of pepper.

The farmers list the problems they encounter on a daily basis, from lack of fresh water to grow profitable citrus fruits to no access to farm roads at night. Most of Jiftlik is in Area C, where the Palestinian authority has responsibility for civil life such as health and education while Israel retains full control over security and administration related to territory, including land.

There are several Israeli settlements in the area and many of the farmers are forced to hire themselves out as labour because their own output is not enough to sustain them.

One main problem which In Tajuna will address is that of the packaging and marketing of their produce. Collaboration with a Palestinian packaging company means they will no longer have to rely on the Israelis.

“If I produced cherry tomatoes I was obliged to sell for four shekels a kilo although production-wise it was costing me seven shekels per kilo,” a farmer explained. “I was paying the Israeli packaging house to package my tomatoes so I could access Israeli or international markets through Israeli wholesalers.” Due to Israel’s full control over borders, the farmers have no option but to sell their produce to Israel.

One of the aims of In Tajuna is to make the farmers’ produce available to a wider market, through better distribution.

“Cooperatives have never attempted to collectively market their own product. Therefore this will make it more cost efficient to put all the produce in one truck and distribute it to one geographical area,” said Nahed Freij, project manager with Solutions for Development, which came up with the In Tajuna concept.

The project developers believe they can reach two million consumers, and that In Tajuna will not only open up the domestic market to local producers, but also eventually allow them to export their produce abroad.

While there are clear benefits for the producers, they are also running a risk by committing to the project, Freij admits.

“We are trying to make a good return on the investment of the producer who’s picking up extra costs. They are taking a risk. This has never happened before.

But she points out that the project is providing the support in terms of increasing output and mass media and merchandising aimed at winning consumer loyalty.

“We have also succeeded in gaining the commitment of points of sale to directly buy from the farmers versus the traditional channel where a wholesaler was in the middle,” she adds.

The farmers of the Jiftlik cooperative are optimistic.

“In Tajuna is part of something positive because it will increase our share in the local market. Especially as Israeli produce is infiltrating our market and if we cannot compete in our market there is a problem,” said the spokesman.

Developed by Ramallah-based Solutions for Development and launched as a pilot programme in partnership with the SDC in January 2007.

The aim is to empower Palestinian small and medium-sized enterprises to increase their market share within the domestic market, focusing on two sectors: fresh fruit and vegetables (FFV) and fast moving consumer goods (FMCG).

Project proper started in November 2008 and will run until the end of April 2011 with capital of $1.8 million, of which $1.1 million will come from the SDC.

Promotional means include the In Tajuna quality seal and a marketing and mass media communications campaign.

A development office of the Swiss foreign ministry, which also has a representative (diplomatic office) to the Palestinian Authority in Ramallah and an embassy to Israel in Tel Aviv.

In charge of development and humanitarian programmes, its turnover is SFr20-22 million per year.

It is responsible for programmes and projects in Gaza, the West Bank and East Jerusalem.

Its humanitarian focus is to assist the most disadvantaged people, including refugees. The programme also relates to the support of Palestinian institutions to build their capacities.

Giancarlo de Picciotto has been head of the office for three months. Before that he was desk officer for the Gaza and West Bank programme. He is an agronomist by training. 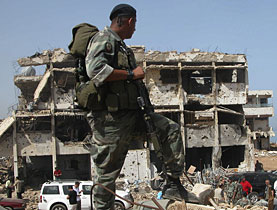 Switzerland will follow through on its part of a $7.7 billion (SFr8 billion) plan designed to assist Palestinian authorities in building a viable ... 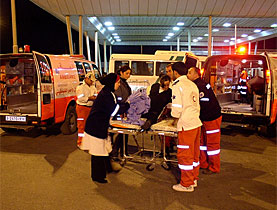 While political divisions refuse to heal, Israeli and Palestinian medical relief groups are trying to overcome numerous hurdles through evolving ...