A decision announced by the United States to charge some foreign visitors for the right to enter the country has provoked anger in Switzerland and Europe.

As of September 8, travellers from countries in the US visa waiver programme will nevertheless have to hand over $14 (SFr14.6) to be allowed into the country.

Switzerland is one of 36 countries to have qualified for the visa waiver programme, which allows visitors with biometric passports to stay up to 90 days without a visa.

The Swiss foreign ministry told swissinfo.ch that the country had appealed to Washington over the tax “several times, like many other European states”, but that its protests against the principle of the new charge had been unsuccessful.

Meanwhile, the European Union Commissioner for Home Affairs, Cecilia Malmström, has described the tax as “inconsistent with the commitment of the US to facilitate transatlantic mobility and will be an additional onus for European citizens travelling to the US”.

The US Border Protection, which will collect the charge, rejects the criticism, claiming that 56 other countries already collect an entry tax, which in some cases is as high as $100.

The new entry fee is made up of $10 for “travel promotion” and $4 for administrative costs.

The $4 segment will be used to pay for the Electronic System for Travel Authorization (Esta) - in place for travellers from visa waiver programme countries since January 2010.

The system requires visa-exempt travellers obtain an electronic entry permit. This entails filling in a detailed online questionnaire including information about the identity, state of health, and possible criminal past of the applicant. Most people who fill in the form should receive approval from the US Department of Homeland Security within a few minutes.

The permit replaced the I-94 card which passengers previously filled in on their flight into the US.

Its introduction was the target of much criticism at the time, and some technical amendments have since been made.

However, there was never any question of payment in the past. “Registration with Esta is free. The US Government does NOT charge to register with the Esta programme,” the website of the US embassy in Bern still says.

The remaining $10 of the fee will go towards a semi-public promotion fund that was created under the Travel Promotion Act signed into law in March this year. The act aims to boost the US tourist industry, which has been in decline since 2000. The fund will be used to help the industry recover.

According to figures for 2009, the number of foreign tourists going to the US had dropped by 2.4 million since 2000, while the industry’s turnover fell by $509 billion and tax income from tourism dropped by $32 billion.

Ironically, the law responsible for the controversial new tax on visitors says one of its purposes is to make entry procedures to the United States more “welcoming”.

Reporting on the entry fee, the consumertraveler.com website asked whether it would discourage tourists from coming to the US. “And how soon do you think it will be before American travelers will have to ante up money to enter these 39 countries? After all, fair is fair.”

The British-based MoneySavingExpert.com advised people to apply for the Esta form before September, while it was still free. Once approved it is valid for two years.

In its story on the issue, the website’s Martin Lewis, commented: "It is rather strange this fee is mainly going to promote US tourism. You would've thought keeping it cheaper to get in would help more – after all, it's free for most Americans to come here."

Before the act was signed in March, the International Air Transport Association spoke out against the fee, saying none of the 36 countries in the visa waiver programme had a tourism-specific fee.

Adding fuel to the fire of criticism, the tax has to be paid online in advance, before the electronic registration is filled out. Of that, $4 will be charged to the traveller’s debit or credit card, even if their Esta application is refused.

Still, according to Switzerland’s biggest travel agency Kuoni, the fee will not stop Swiss heading to the US. “Taxes are not a good thing for tourism, but, because of the small amount being asked for, travellers who really want to go to the US will pay up.”

Travel to the US

As of September 8, 2010, all Electronic System for Travel Authorization (Esta) registration applications or renewals on or after that date will require a $14 fee payment by credit or debit card.

The US Department of Homeland Security began enforcing compliance of the Esta requirement for travellers from visa waiver programmes in January.

The Department of Homeland Security says the Esta is an “automated system used to determine the eligibility” of visitors to travel to the US under the visa waiver programme.

It collects the same information as the paper I-94W form that visa waiver programme travellers filled out en route to the US.

Esta applications may be submitted at any time prior to travel but the US recommends that travellers apply as soon as they begin making travel plans.

Authorisation is generally valid for up to two years. It establishes that visitors are eligible to travel to the US.

Authorisations are valid for multiple entries.

Upon arrival in the US, visitors must pass through border control where a person can still be found inadmissible under the visa waiver programme or for any reason under US law.

The authorities are hoping to dispel concerns among Swiss expatriates over the sometimes difficult process of applying for new biometric ...

From March 1 biometric passports will be issued in Switzerland - containing a holder’s photograph and fingerprints - bringing the country into ... 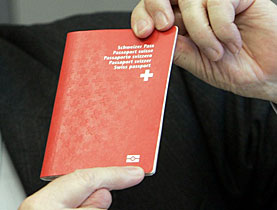 Swiss voters have approved the introduction of biometric passports - by the narrowest of margins. Official final results show 50.14 per cent ...

The Swiss government wants to introduce new electronic passports that include fingerprints and personal details about the holders. The idea is to ...