Former Foreign Minister Joseph Deiss has been elected to the annual presidency of the United Nations General Assembly.

Formally, the presidency of the General Assembly is the highest office in the UN. But unlike the UN secretary-general – currently Ban Ki-moon – the president has no decision-making powers.

Foreign Minister Micheline Calmy-Rey was present for the vote in New York on Friday, describing Desiss' election as a "great honour for Switzerland" and as an important sign of international recognition of Swiss commitment to promoting security and peace.

Deiss was nominated in December 2009 and is the sole candidate. He will take up his office at the opening of the 65th session of the General Assembly in New York on September 14.

It will be a fitting post for the man who in 2002 convinced Swiss voters to approve finally the country’s entry into the UN.

Deiss has described the raising of the Swiss flag at the organisation’s New York headquarters in September 2002 as one of the finest moments in his political career.

An economics professor before he joined the Swiss government, Deiss a member of the centre-right Christian Democratic Party.

Critics used to describe him as drab and unexciting. No one disputed his seriousness or ability, but he was seen as lacking charisma and passion. However, those who know him say he is much less stiff than his image implies and that he has a dry sense of humour.

Deiss sees himself as a bridge builder, able to look at issues from different sides. His talents as a negotiator should stand him in good stead as General Assembly president.

His ability to see subjects from more than one angle may have to do with his background: he comes from canton Fribourg and his home village lies more or less on the dividing line between German and French speakers.

He has always been influenced by both cultures and mentalities. This has also given him a linguistic edge: he is bilingual, as well as being fluent in English.

As a politician from Switzerland, where the political system is built on compromise and consensus, he is used to looking for the middle ground.

After being nominated to the UN post, Deiss said he believed that traditional Swiss values, such as neutrality and the ability to compromise, had helped him.

He compared the president’s role to that of a referee, who has to mediate between teams.

However, although his nomination can be seen as a political success for Switzerland, he will not promote Switzerland’s interests. That is the role of the Swiss permanent representative to the UN, Paul Seger.

Deiss’s task is to move the international community forward on issues that are a matter of dispute between the various blocs in the UN.

In interviews with the Swiss media, Deiss has said the main tasks of the 65th General Assembly include reform of the UN, the debate over the Millennium Goals and economic issues.

He told the Tages-Anzeiger of Zurich and the Bund of Bern that the president of the General Assembly could play an important role in the reform process.

As a Swiss he would be in a good position to seek compromise, he explained.

On the one hand, Switzerland had already come out strongly in favour of reform. “On the other, Switzerland does not have the same far-reaching aspirations as countries that would like to become permanent members of the Security Council, for example."

Asked whether last November’s popular vote to ban the construction of minarets would limit his ability to reach compromises, Deiss said he hoped to increase good will towards Switzerland.

Seger believes that Switzerland’s role as a bridge builder is likely to become more evident as a result of Deiss’s term in office, which in turn could increase its influence at the UN, although that is not the purpose of his role.

The Swiss UN mission will support Deiss as far as it can, says Seger. He thinks the mission could well be approached by other UN members which have specific concerns, so he expects its workload to increase.

Joseph Deiss was born in Fribourg in 1946.

He is married, and has three grown-up children.

He was elected to the Swiss House of Representatives in 1991.

In 1999 he joined the Swiss cabinet, as foreign minister.

He moved to the economics ministry in 2003, and stepped down from the cabinet in 2006.

From 1984 until his election to the cabinet he was a professor of economics at Fribourg University.

Between 1993 and 1996 he was Switzerland’s Federal Price Regulator.

The UN General Assembly is attended by all 192 UN member states.

All members‘ votes are equal, irrespective of size or power.

The presidency rotates annually between a representative of one of the five regional UN groups.

The 2010 presidency falls to the Group of Western European and Other States.

As a member of the group, Switzerland proposed Joseph Deiss. The group preferred him to Belgium’s candidate, Louis Michel.

Regional groups nominate only one candidate, so he or she is normally elected by acclamation.

The president draws up the agenda for the assembly with the help of the presidential committee.

He also chairs the two week General Assembly debates, and any special sessions held during the course of the year.

In addition, he works with other UN officials to draw up resolutions worded so as to find a consensus among General Assembly members.

Deiss is the first Swiss to hold the office of president. 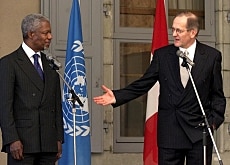 His resignation may have come as a shock, but it was no surprise that Joseph Deiss picked Switzerland's entry to the United Nations as his best ... 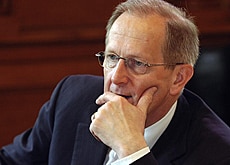 Professor with a passion for politics

The outgoing economics minister, Joseph Deiss, had in many ways a textbook political career, moving from local to national politics. Deiss, an ... 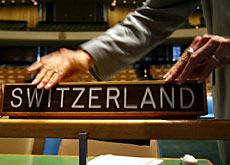 Three years after joining the United Nations, Swiss neutrality is intact and the nation has benefited from membership, says the Swiss economics ...

A look back at former Swiss president Kaspar Villiger's visit to the UN on September 10, 2002. (All pictures: Keystone)