A herbicide developed by Swiss firm Syngenta, Gramoxone (paraquat), is being blamed for health problems in Burkina Faso.

The West African country is calling for the product to be placed on the Rotterdam Convention list of extremely dangerous substances. A UN treaty, the convention establishes guidelines for the use of hazardous chemicals and pesticides with a view to protecting human and environmental health.


A study conducted in June-July 2010 by the Burkina Faso authorities in collaboration with local representatives of the Rotterdam Convention, revealed the herbicide had provoked a series of health problems. These included skin lesions, fever, respiratory and vision problems if inhaled, eye burns and vision problems after contact with eyes, abdominal pain, and vomiting and paralysis following ingestion.

The study surveyed 650 farmers in three regions of Burkina Faso. Researchers identified 296 cases of poisoning linked to the application of pesticides. In 20 per cent of cases, paraquat, the active substance in Gramoxone, was deemed to be the cause.

Researchers noted that farmers surveyed often do not have access to materials and finances, or the know-how, necessary for the safe use of such products. In light of its impact, researchers are demanding paraquat be included on the list of banned substances in Annex III of the Rotterdam Convention.

The Burkina Faso government has officially transferred the request to the secretariat of the convention.

A committee of scientific experts is due to examine the case at the end of March. If the committee upholds the survey findings, the 2013 Conference of Parties to the convention (the conference of June 2011 is too early) will decide whether or not to include paraquat in Annex III.

Both the Burkina Faso agriculture minister and the scientific coordinator of the study, Adama Toé, declined to comment when contacted by swissinfo.ch.

In Rome, the secretariat of the Rotterdam Convention explained that the request for a pesticide formulation to be included in the list of extremely dangerous substances under Annex III is the first by a developing country since 2001.

A spokesman for the Bern Declaration, a Swiss non-government organisation which has long campaigned against the use of paraquat, François Meienberg, refused to be drawn on the possible outcome of the application by the Burkina Faso government.

But Meienberg noted that a further nine Sahel countries are also examining the possibility of banning the substance. A further indication that the product, already banned in several countries including Switzerland, raises cause for concern.

Technically, the 40 dangerous products included in Annex III are not banned. The focus is on information and collaboration, with the aim of improving transparency around imported and exported products. Their inclusion on the list means that a country must publically announce its intention to import the products ("Prior Informed Consent"). A kind of preventative approach.

Meienberg sees an opportunity for developing countries which have not always had the means to collect the detailed information required to make a case or take informed decisions.

Inscription in Annex III will lead to several countries stopping the importation of paraquat, predicts the Bern Declaration spokesman, based on his knowledge of past instances of substances being included on the list. Food labels which exclude the use of products listed in Annex III will also follow suit.

Product of the future?

From its Basel-based headquarters Syngenta declined to return calls for comment from swissinfo.ch. However the company presents a detailed defence of paraquat on its official website, including links to pages providing information on the correct use of the product.

Sygenta notes that “paraquat is and will continue to be vital in responding to growing demands for food, fibres and fuels produced by agriculture”. The Swiss firm maintains that it has information which demonstrates paraquat is safe for users, consumers and the environment.

The company also notes that it “engages in the promotion of the safe use of all its products, including paraquat, in the form of training programs and services. In 2007, the programs reached 3.4 million farmers across the world.” Evidently the battle surrounding the 50-year-old herbicide is far from over.

Born from the 2000 fusion of the agro-chemical divisions of Novartis and Astra Zeneca, the Basel-based firm employs some 25,000 people in 90 countries, including 10% in Switzerland.

Sygenta is one of the world’s three largest specialists in crop protection (herbicides, fungicides, insecticides etc), and in the creation and production of plant seeds.

The company reported sales in 2010 increased six per cent to $11.64 billion although net profits declined one per cent to $1.4 billion.

Paraquat is one of the most widely used herbicides globally and is sold by Syngenta in some 100 countries under the brand name Gramoxone.

On the market for more than 50 years, it works by attacking weeds which reduce the quality or yield of crops including corn and grain, soya bean, fruits, coffee, tea cotton, and palm oil, for example.

Highly toxic, paraquat is banned in Switzerland, France, Scandinavia, Russia, and Cambodia. The European Union authorised the use of the product in 2004 but the decision was overturned by the courts in several countries.

As food riots return to Africa, a Swiss documentary asks how the world will be fed in just a few decades when global warming causes major losses ... Two men have been killed after guards working for the Swiss biotech company Syngenta clashed with activists invading a genetically modified (GM) ... 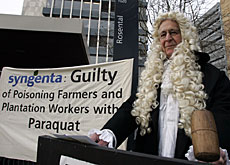 The toxic weedkiller paraquat, which is produced by Swiss agrochemicals giant Syngenta, has been banned by a European Union court for not meeting ...

A group of Japanese women farmers has visited Switzerland to learn about the Swiss land and animal farming regulations and techniques. (SF/swissinfo)