A group of senators and representatives in the United States is calling on Switzerland to allow Mormon missionaries to continue working in Switzerland after 2012, despite a de facto ban.

US Senator Mike Crapo is leading an effort on behalf of 14 members of Congress who sent a letter to the Swiss embassy in Washington earlier this year urging the government to find a way forward for missionaries from The Church of Jesus Christ of Latter-day Saints.


“We expect an ongoing dialogue with the Swiss government representatives and US officials to ensure that responsible religious missionaries have the fullest possible opportunity to continue their work abroad with the minimum of bureaucratic hurdles,” Senator Crapo told swissinfo.ch.

The new regulations stem from a bilateral accord on the free movement of people between Switzerland and the European Union that came into effect in 2002. In effect, this agreement allows European nationals to seek employment in Switzerland while significantly restricting work permits for people from all other countries.

A decision by the Swiss courts established that missionary work is considered gainful employment and therefore subject to quotas.

Hope and a prayer

The Swiss embassy responded to the request by Congress members – who included Harry Reid, Majority Leader in the Senate – in an October letter offering hope for a possible solution through dialogue and other means.

“Laws can be amended and regulations can be changed but it will be up to the relevant communities involved to initiate those changes,” Urs Ziswiler, the Swiss ambassador at the time, wrote in the correspondence.

Ziswiler told swissinfo.ch: “We have several similar cases from other countries and to make an exception for the Mormons would create a precedent.”

In response to the correspondence, Senator Crapo told swissinfo.ch that he appreciates the invitation to “continue discussions” to find a way for Mormon missionaries to continue their services. Most Mormon missionaries who come to Switzerland are from American states, including Utah, Missouri, Idaho and Arizona.

Under an existing transition agreement, a maximum of 80 Mormon missionaries from the US were allowed into Switzerland in 2010, and 50 will be permitted in 2011. As of 2012, there will be no future  admissions of missionaries of any denomination from any third party states, according to the Swiss embassy.

In their letter, the members of Congress pointed to the “special relationship of the  LDS [Latter-day Saints] church with Switzerland,” adding that Bern was chosen as the location for the first LDS European temple.

“Today, there are a substantial number of LDS Church members in the United States who proudly claim their Swiss ancestry. It would be a great tragedy for our two nations if the long standing missionary program of the LDS Church in Switzerland were terminated,” the senators wrote.

They added that LDS missionaries are in Switzerland as unpaid volunteers performing ecclesiastical duties only and as such do not  compete with other workers.

“On a reciprocal basis, young Swiss members of the LDS Church are able to serve their 24-month missions in the United States without restriction,” they added.

The Mormon church has a long history in Switzerland dating back to 1850, and the Church of Latter-day Saints certainly wants that tradition to continue. “We hope a solution can be found that allows  missionaries, regardless of their country of origin, to continue to serve the Swiss people,” Michael Purdy, a spokesman for the Utah-based Church of Jesus Christ of Latter-day Saints, told swissinfo.ch.

“In our experience, the Church’s missionaries return home after service in Switzerland with great love and respect for the people, history, and culture of the country.”

Missionary work for The Church of Jesus Christ of Latter-day Saints began in Switzerland in 1850.

High ideals are taught with a strong emphasis on family life, as well as abstinence from alcohol and tobacco.

The first church temple built in Europe was completed in Zollikofen, near Bern, in 1955. Initially, it served church members throughout Western Europe and the Nordic countries.

Considered "houses of the Lord," and distinct from meeting houses, temples allow faithful church members to carry out various ordinances such as marriages, baptisms, and other sacred ceremonies. 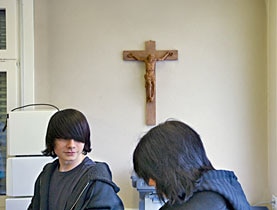 A European Court of Human Rights judgement against the display of crucifixes in Italian classrooms has stirred up debate over the issue in ...

Remarks by Pope Benedict XVI that condoms could be used “in certain cases” in the fight against Aids have prompted positive reactions from many in ...

Minaret ban stays in media focus - one year on