Should grandchildren of immigrants have privileged access to a Swiss passport? The political right warns against the reform, saying it is wrong and potentially dangerous to ease the citizenship procedure for so called ‘third generation foreigners’. The Swiss decide on February 12.

The Swiss People’s Party is fighting against not only the government but also all other major political parties, the cantons, cities as well as the business community.

Parliamentarian Jean-Luc Ador is concerned that Switzerland essentially might put the passport up for sale.

“It is like a club membership. If you want to join, you have to apply. I don’t know of many clubs which give away membership so easily. Switzerland would be unique,” he says.

He argues that a person must earn the Swiss passport. His party colleague Lukas Reimann is adamant that easing the process of gaining citizenship could encourage grandchildren of people who are poorly integrated in Swiss society – even jihadists – to apply for Swiss nationality.

“The third generation is considered particularly problematic,” he says, quoting experts from Germany and France, in a party newsletter.

Up to 24,600 young foreigners are eligible for facilitated citizenship now, according to a study by the University of Geneva.

They are mainly from neighbouring Italy as well as Turkey and southeastern Europe. Experts say only a fraction among them is likely to apply for a Swiss passport.

About 40% of the potential beneficiaries can already use a simplified procedure in seven of the country’s 26 cantons: Geneva, Zurich, Vaud, Bern, Neuchâtel, Fribourg and Jura.

Under current law, spouses of Swiss citizens can apply for a facilitated citizenshipexternal link. All others, as a rule, have to undergo a time-consuming and somewhat expensive formal procedure, depending on their place of residence in Switzerland.

The proposal, approved by parliament in September 2016, sets a number of conditions for potential applicants of eased citizenship. They must be born in Switzerland, between nine and 25 years of age, hold a C permit and have attended at least five years of regular schooling in Switzerland.

Their parents also must have lived in Switzerland for at least ten years, including five years of Swiss schooling, and hold a valid residence permit. At least one grandparent has to be Swiss or have a residence card.

Candidates for eased citizenship procedure have to be ‘well integrated’, respect the law and values of the Swiss constitution, speak at least one of the four national languages, and be free of debt.

An estimated 24,600 foreigners currently are eligible for the eased procedure, but experts say only a fraction of them are likely to apply.

It was Ada Marra, a Social Democratic parliamentarian, who initiated the reform in 2008, which comes to a nationwide vote in February.

She says the ‘third generation foreigners’ have their roots in Switzerland.

“The link with the country of their grandparents is often purely touristic or symbolic,” says Marra, whose ancestors hail from neighbouring Italy.

The amendment is the result of a political compromise and takes a step into the right direction.

Demand for Swiss citizenship has fluctuated over the years depending on changes to the naturalisation law and the political context, but the ...

“It is far from revolutionary,” she says.

However, it has achieved two things in particular. It is no longer the responsibility of a candidate to prove that he or she is integrated in society. Instead, the cantonal authorities have to produce evidence of the contrary if they wish to decline a request.

Marra is also pleased to see that the constitutional amendment would streamline legislation on citizenship in all the 26 cantons as they share the task with the federal authorities.

Launching the campaign for the February 12 vote, representatives of the government, the cantons and the cities unanimously said the eased citizenship procedure was a recognition of “responsible young people” and “not least for those grandfathers and grandmothers who served our country with their hard work”, as Justice Minister Simonetta Sommaruga put it.

She said the aim of the reform was to impart the right to participate in Swiss politics to young people who have worked and lived among the Swiss. “Switzerland is their home country, but they have no Swiss passport.”

However, Sommaruga cautioned: “Citizenship is not granted automatically.”

Representatives from canton Zug and the town of Frauenfeld similarly stressed the strict conditions as well as the public and economic interest in rewarding law abiding young people.

They deserved to benefit from a simpler, less complex and less costly procedure, they said.

Beside a proposed reform on easing the citizenship procedure, there are two other issues on the ballot sheet.

The government and parliament propose setting up a special fund to finance road traffic projects as part of a change in the constitution.

Arguably the most divisive issue is a reform adopted by parliament to adapt the corporate tax system, challenged to a vote by the political left.

It is the first of up to four nationwide votes in 2017.

The committee in favour of the simplified procedure has some prominent supporters. In an unusual move, three former cabinet ministers from different political parties, Ruth Dreifuss, Pascal Couchepin and Eveline Widmer-Schlumpf, came out in favour of the reform.

Votes on citizenship are usually highly emotional ballots in Switzerland. Three previous proposals to facilitate naturalisations failed over the past 35 years.

In 2004, voters narrowly rejected a proposal to grant the Swiss passport automatically to ‘third generation foreigners’.

On the other hand, an initiative by the Swiss People’s Party also was thrown out four years later. It aimed at letting citizens at the local level have the final say on individual citizenship applications.

Parliament two years ago approved an amended citizenship law. Following years of tough debate, both chambers signed on to a compromise.

They lowered the minimum length of time spent in Switzerland from 12 to ten years before a candidate can apply for citizenship under the regular procedure.

Despite the reduction, Switzerland is among the countries in Europe with the highest residency requirements.


With input from Katy Romy, swissinfo.ch

Getting a passport Rules for Swiss citizenship slightly eased

Parliament has paved the way to make it easier for third-generation immigrants to acquire a Swiss passport. Swiss voters will have the final say ...

Under a new naturalisation law rubber stamped by parliament on Friday, foreigners will have to wait ten years, rather than 12, before they can ...

By Jo Fahy with input from Armando Mombelli

Despite a substantial increase in 2015, the number of residents opting for a Swiss passport has seen a steady decline since a peak in 2006. More ...

Demand for Swiss citizenship has fluctuated over the years depending on changes to the naturalisation law and the political context, but the ...

A law pushing for better-integrated new citizens has put on hold one couple's dream of becoming Swiss anytime soon. Does it go too far?

A study based on past Swiss citizenship decisions concludes that naturalisation accelerates political integration. The researchers suggest that ...

Swiss citizenship laws have undergone dramatic changes in the past 20 years.

Citizenship Why the sudden interest in Swiss passports?

Demand for Swiss passports jumped 19% in 2015 and is expected to remain high this year amid immigration uncertainties and stricter application rules.

The Swiss identity What does it mean to be Swiss?

In a country where it’s notoriously difficult to get a passport, people who hold one tend to see their citizenship as positive. But not everyone ... 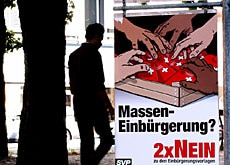 Swiss voters have thrown out parliament-backed proposals to make it easier for young foreigners to become citizens, in nationwide ballots on Sunday.