When it comes to Brexit, there’s probably no better place to gauge the views of Switzerland’s faithful British contingent than Wengen. The village is home to one of world’s oldest alpine ski clubs, the Downhill Only Club. Most of its 1,600 members are British.

In this continental UK bastion, perched on a sunny cliff above the Lauterbrunnen Valley, most people I polled say they’re backing the “Remain” camp. That includes retirees. By contrast, pundits claim Britain’s older generation largely favours Brexit. So, it seems plausible that those who spend significant time across the channel think differently.

EU priorities Brexit and the Swiss connection – a guide

Switzerland isn’t a member of the European Union. Why does it care about Brexit?

Briton Alan Norris, who owns Wengen’s Caprice Hotel, a stone’s throw from the train station, favours EU membership, but calls the upcoming June 23 vote precarious. “Right now, it’s on a knife’s edge,” he speculates when asked on the village main street in early May. “I predict the vote will be 51-49 to stay in.”

As a hotelier, Norris has courted his fellow countrymen for 14 years. While the British return to the Caprice year after year, they come in ever dwindling numbers compared with wealthy Japanese and Chinese tourists. This July and August he’s hoping for a healthy British turnout for what’s become his most lucrative season - if the summer weather is good.

“Brexit won't make a difference,” he says, but then reconsiders. If Britain votes to leave Europe, he assumes the British pound will fall even further against the strong Swiss franc, making his four-star hotel that much pricier.

Late in the ski season, when Norris hosted the Downhill Only Club - or DHO as it’s known - for a Tuesday night drinks event, Brexit was the hot topic. Amid the clatter of clinking wine glasses and passing trays of hors d’oeuvres, long-time members bantered about the upcoming vote, particularly about how the recent deluge of refugees in Europe would affect it.

“Personally, I think voters will favour the status quo,” predicted John Pailthorpe, a retired journalist who has been coming to Wengen for more than a dozen years. “European law has improved the life of most Britons.”

Sitting in a stuffed chair by the fire, he blames the media for whipping up negative sentiment on refugees. “If you were in a war zone, regardless of why, you would get the hell out. The brutal truth is this: if you’ve got compassion in your soul, you let these people in.”

One British member with a vested interest in a pro-Europe outcome is Brian Phillips, who draws a pension from the EU and lives six months in southern France. “I fear immigration will be the dominant issue,” he warned, buttoning his coat to depart for dinner. “It will be a very close vote.” Phillips first came to Wengen on his honeymoon in 1966 and then bought a chalet in 1981. Now living half time in Wengen and the rest in France, he worries about the EU’s financial stability if Britain pulls out.

Most DHO members at the drinks party thought Brexit would also hurt Britain’s financial future. Cynthia Perkins, who has been in Wengen for 15 years, said: “I’m dead against Brexit. From a business point of view, it’s better to remain. Even though the EU is a mess, we are just a small island.”

“We will be worse off if we get out,” echoed Rachel Eastwood, a young optometrist from South Cumbria who spends fours months every year teaching skiing in Wengen. “I think the common market is good.”

Hayley Davies, a full-time mother whose husband is DHO’s Wengen manager, agreed. As a young Scot, she cast a prior vote for Scottish independence from Britain. “Scotland is a poor sister to England,” she explained. “We need a group to stand against Westminster.”

Fellow Scot Brian Bollen owns a home in Wengen with his wife. He will vote to stay in the EU even though he instinctively wishes Britain could be completely free to run itself. He fears Brexit could adversely impact their Wengen life, potentially restricting free hospital coverage in nearby Interlaken and limiting home ownership. “If Britain leaves the EU, how might that affect us as owners of a small property in Switzerland? Might we find restrictions placed on the use of it, and eventual sale of it?”

Of the 20 people we spoke to, we could only find one firm Brexit backer. Mike Oldham, a retired pilot, adamantly wants Britain out of Europe. He’s been coming to Switzerland since 1963. “I don't believe the EU has done anything to help security and the mess of migration,” he observed. “The vote will be very close, but I think Britain will vote out.”

Nearby, next to the Caprice bar, Helen - a DHO member since 1952 - said she was undecided. She lamented that British Prime Minister David Cameron could have negotiated a better EU deal. That, she argued, would have made her decision easier.

Back on main street, Norris concedes that many UK citizens are stuck in Helen’s camp, still sitting on the fence. He hopes these undecided voters realise Brexit is no panacea - especially as a wall against migrants. If Britain leaves the EU, the border moves from France to the UK, putting desperate refugees right on its doorstep.

The holiday resort of Wengen lies at the foot of the Jungfrau, 400 metres above the Latuerbrunnen valley at an altitude of 1,274 m. Railway links to the village opened in 1909-1910, making it accessible all year around.

Alpine skiing and racing was invented in the surrounding Jungfrau region, with the British playing a prominent role, organising their first national alpine skiing championships in 1921 on the slopes above Wengen.

In 1924 Wengen regulars formed the Downhill Only Club to compete against the nearby resort of Mürren’s British-run Kandahar ski club. The club claims to have played an important part in the development of skiing.

Ski World Cup Looking back at the legendary Lauberhorn race

The 84th international Lauberhorn ski race, which begins Friday in Wengen, marks the end of an era - the Ernst and Viktor Gertsch era, a ...

By Jane A. Peterson in Wengen 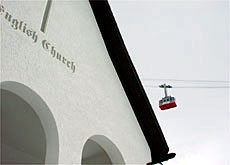 The Hotel Regina looms over the railway station; the Hotel Victoria stands up on the left, not far from Wengen’s Anglican Church. If Wengen is ...