Freshly re-elected Finance Minister Eveline Widmer-Schlumpf will serve as president of Switzerland in 2012.

The post of president rotates annually among the seven cabinet members. The 55-year-old Conservative Democrat received 179 out of 239 votes in the parliamentary presidential election on Wednesday. Defence Minister Ueli Maurer will be her stand-in.

Widmer-Schlumpf is the first Conservative Democrat to serve as Swiss president. She joined the newly-formed party after she defied the People’s Party and accepted a place in the cabinet in 2007.

At that time, the People’s Party insisted that  she give up her new seat, which she had taken from controversial Justice Minister Christoph Blocher.

Widmer-Schlumpf served as justice minister for three years, and has been the finance minister since autumn 2010. The Graubünden politician’s father was also a member of the cabinet and served as president.

Widmer-Schlumpf takes the place of the retiring president and foreign minister, Micheline Calmy-Rey. She is the third woman in a row to serve as Swiss president.

On the eve of cabinet elections, the ability of the rightwing Swiss People’s Party to win back a second cabinet seat is in serious doubt. Four ...

Cabinet prepares for new round of musical chairs

Parliament is preparing to elect a new cabinet on December 14 amid great uncertainty over who will win the vacant seat and whether all incumbents ... 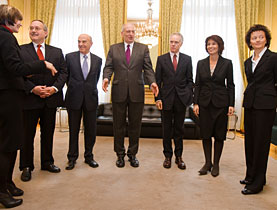 Newly elected cabinet member Eveline Widmer-Schlumpf will take over the justice ministry from her ousted colleague Christoph Blocher in January. ...

An emotional time for candidates and supporters. On December 14, parliament elected the seven cabinet ministers for the next four years. The only ...