Tens of thousands of people are flocking to Davos – not for the gathering of the world’s political and business elite at the annual  WEF summit – but for the national yodelling festival. The pageant hasn’t lost its appeal over the decades. (SRF/swissinfo.ch)

Alpine shepherds developed yodelling as a way of gathering cattle and to communicate over moderate distances in the mountains.

The national yodelling festival is held every three years in a different Swiss city. The 2014 edition, in Davos from July 3 to 6, is organised by the Swiss Yodelling Association and is the highlight of the year for fans and participants.

Throughout  the festival, artists from all over the country – and from overseas – descend on Davos. They include yodellers, flag throwers and alphorn players. This year’s edition is expected to attract 180,000 visitors, fewer than the previous two editions in Lucerne and Interlaken. This may be because for the first time the festival is taking place in canton Graubünden, where yodelling is less popular than in many other parts of the country.

Highs and lows Yodellers learn the price of fame

They were simple mountain farmers. Overnight the 20 members of the Wiesenberg yodelling club were catapulted to national fame, when they won a ...

By Jessica Dacey and Christian Strickler 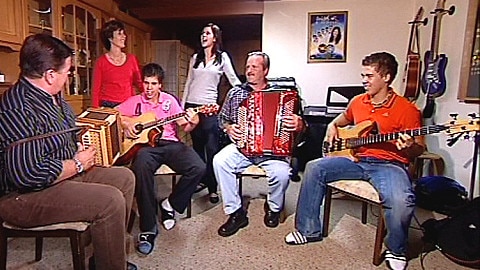 Yodelling Melanie Oesch shows her star qualities. The Swiss yodelling group, the Oesch family, has been voted the best act in the TV competition, ...

Hannes Fuhrer from Hohfluh-Hasliberg in canton Bern is considered one of Switzerland’s greatest yodel composers and choir directors and has done ...

Traditional Swiss folk music is experiencing a boom with nationwide courses in alphorn blowing, and a bachelors degree course in Lucerne in ...

What does building dry stone walls have to do with a procession of turnip lanterns or speaking patois? Or with eating fondue, telling ghost ...