The people of Zurich have voted to continue to allow assisted suicide for non-residents despite a campaign to restrict so-called suicide tourism.

A proposal to restrict access for foreigners to assisted suicide only to those living at least one year in the canton was rejected by 78.4 per cent of voters.

A second popular initiative launched by fringe conservative parties the Federal Democratic Union and the Evangelical Party seeking a national ban on assisted suicide was rejected by an ever greater majority.

The main rightwing and leftwing parties had campaigned against both initiatives, calling on their supporters to vote against them. About 200 people commit assisted suicide each year in Zurich.

Under Swiss law it is legal to assist a person to commit suicide as long as the helper has no vested interest in the death. Assistance can only take a passive form, for example it is legal to procure lethal medication for another person but not to administer it.

Dignitas, the only Swiss association that helps applicants from abroad commit suicide, accompanied 1,138 people in taking their own lives in 2010. Of these cases, 592 came from Germany, 118 from Switzerland, 102 from France, 19 from Italy, 18 from the United States and 16 from Spain.

Voters in Zurich are being given mixed messages about whether to allow or prevent people from being able to decide how to end their own lives. ...

By Ariane Gigon in Zurich

Here’s one record the Swiss may not be so enthusiastic about holding: more suicides are committed here using guns per capita than anywhere else in ... 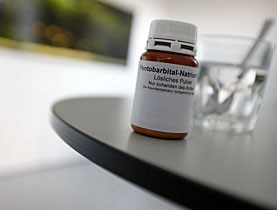 Government proposals to ban or restrict assisted suicide and the activities of right-to-die groups in Switzerland have come in for criticism. ...

Switzerland has five assisted suicide organisations, which help around 350 people kill themselves each year. Exit - the largest with 50,000 ...