Six women have been fined since a so-called burka ban went into effect in the southern Swiss canton of Ticino last summer.

Ticino’s security authorities released the figures on Monday, noting that in another ten instances, the police had merely issued warnings. Many cases involved foreign visitors who were unaware of the law and who readily removed their veils.

The ban prohibits people from wearing clothing that covers the face in public. In 2013, local voters accepted an initiative calling for a ban on such clothing, typically worn by Muslim women. On the first day of the ban, a Swiss woman who had converted to Islam staged a protest in Locarno. Wearing a blue niqab – which covers everything but the eyes – she was the first person to be fined.

Last September, the Swiss House of Representative passed a parliamentary initiative that would ban the wearing of burkas throughout Switzerland. However, a Senate committee rejected the initiative in January, so it is unlikely to pass in that chamber of parliament. The Senate committee concluded that hardly anybody in Switzerland covers her face for religious reasons.

Meanwhile, a people’s initiative on the subject is currently underway. Its supporters have until this September to gather the 100,000 signatures necessary to force a nationwide vote on banning burkas. A survey conducted by two Swiss newspapers last year indicated that 71% of the Swiss population would support such a ban.

An overwhelming 71% of the Swiss population would support a nationwide burka ban, according to a new survey published on Sunday.

Face to face Is a ‘burka ban’ really necessary in Switzerland?

Several European countries have banned in public places the wearing of veils or any kind of clothing that hides the face. Now supporters of a ...

Two-thirds of the Swiss refuse to recognise Islam as an official religion, requiring Muslims in Switzerland to make a greater effort to integrate.

The European Court of Human Rights has upheld a decision by Swiss authorities to fine a Muslim couple who refused to allow their daughters to ...

Tourism trouble Ticino as a test case for a burka ban

A niqab and burka ban was approved in the southern Swiss canton of Ticino, a popular destination for Arab tourists. It has now inspired a similar ...

The Swiss Centre for Islam and Society was officially inaugurated in Fribourg on Monday following high-profile attempts to block its opening.  ...

Swiss mosques and Muslim associations are in the spotlight after concerns over the opacity of their funding and possible foreign influence.

The minaret ban in Switzerland has fostered mistrust in society and laid bare cracks within the political parties, sociologists and political ... 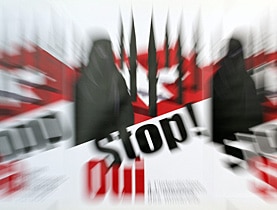