Leading Swiss supermarket chain Coop has responded robustly to allegations of irregularities in the display of expired meat at its butcher counters.

Last month a lone butcher came forward on the Swiss television consumer programme Kassensturz claiming that packaged meat past its use-by date was routinely taken from the self-service fridges in the store where he worked, removed from its packaging and offered for sale at the open meat counter as fresh meat.

Blaming the dodgy practices on a handful of “black sheep” among a staff of 3,000 butchers, a Coop spokeswoman told swissinfo.ch that the vast majority of its butchers worked well.

“It is not acceptable for employees to ignore our company guidelines, employees who cheat our clients! We don’t want that and we will crack down on it,” the spokeswoman wrote in an email.

“We have always done so. But apparently there were grey areas,” she continued. “And these will now rigorously be done away with. From now on in this matter there will be no tolerance.”

Coop said it was doing everything it could to guarantee that rogue butchers could no longer cheat customers, including bringing in an outside certification company to monitor its meat sections from January.

The company was aware of the problems associated with unpacking meat and in August introduced an explicit ban on the practice of unpacking any meat on display – expired or otherwise – to be presented for sale.

Sara Stalder, head of the Swiss Consumers Association, said she was aware of occasional problems with meat labeling but was shocked by the scale of the breaches at Coop.

“This is deception. Customers need to know what they are buying and should not pay the same price for meat which has reached its expiry date and previously been marked down.”

Stalder called for complete transparency from Coop. “They should name the stores involved and clearly write at each sales point the correct information about the meat they are selling, including its origin.”

Coop has pledged honest and open communication with the public on this issue and is holding an “open day” event in its stores for the rest of the week.

The consumer campaigner pointed out however that customers’ health was not put at risk. “The safety limits [expiry dates] should be there but they are essentially a guideline and properly stored meat can safely be consumed up to several days past the expiry date.”

Apart from presenting older meat as fresh, the butchers who came forward to Kassensturz revealed that imported meat was passed off as Swiss.

“It’s like this with the chicken. Usually it’s Swiss chicken on display [in the open meat counter] but if you get one or two or however many packets of imported chicken then it’s mostly immediately mixed in and naturalised, let’s say. There is of course a very big price difference. It’s not right, ” a butcher told the programme, speaking anonymously.

Another butcher recalled that Thursday was the day for reworking meat. “Out-of-date pork fillets were marinated, red marinade being the best to make it look fresh,” he said.

“The orders came from the head butcher; anyone who refused was hassled,” he added.

One manager, also speaking anonymously, said that head butchers were motivated by sales-related bonuses, with 15 per cent of their salary linked to performance.

Philipp Wyss, head of marketing at Coop, defended the company’s record on television. As a qualified butcher, he said the news of fraudulent meat selling was “like a knife in my butcher’s heart”.

“Selling meat is a question of trust. What has happened cannot and obviously will not be tolerated,” he said.

On the question of butchers being motivated to reach bonus targets, Wyss said staff bonuses were based on overall sales figures for the whole store and added: “I find it right that we try hard to meet goals but it’s completely wrong to resort to illegal measures which cheat the customers and Coop.”

The cantonal laboratories are responsible for checking that food outlets sell safe products and comply with the law. The head of Bern’s cantonal laboratory, Otmar Deflorin, told swissinfo.ch that the kind of deception carried out by the Coop butchers would be impossible to detect.

“When we visit a site we ask what kind of quality management concept they have and how that is controlled and applied. We look at traceability.”

But there are no laboratory tests for fresh meat because it is meant to be cooked. “These are only applied for meat products that are eaten directly, like cooked or cured meats. Therefore fresh meat cannot be tested micro-biologically.”

Deflorin said that although meat which has passed the use-by date could legally no longer be sold, that didn’t mean it was unsafe. “Of course the food doesn’t spoil just after midnight on the use-by date,” he said.

The cantonal laboratories have the power to impose improvement measures on a company and ultimately charge fines or close down operations if conditions are not met.

Consumers who wish to play it safe can follow Sara Stalder’s advice: “If you are not going to eat the meat on the same day it is better to buy pre-packed meat, even though that’s less environmentally friendly.”

The arrival of Lidl and Aldi shook up the Swiss food business, with Coop and Migros introducing cheap and premium lines. At the same time the price gap between Swiss and foreign food prices has been tightening thanks to competition from the discounter shops.

Migros and Coop have between them around a third of the retail market share, which rises to 70% in the food and drinks sector.

By the end of 2010 both Aldi and Lidl chains were expected to operate 220 stores, seizing 5% market share, according to research by Credit Suisse bank.

The arrival of German rivals also sparked a consolidation of the supermarket retail sector in Switzerland. In 2007, Migros got the green light to take over Denner while Coop targeted the stores left behind by the departing Carrefour and electronics chain Fust.

Despite a bumper potato harvest this year, growers’ joy is being spoiled by big retailers squeezing them on price and rejecting ...

Switzerland’s supermarket landscape is shifting, with Coop nudging ahead of its only rival Migros for the first time. But what does this mean for ... 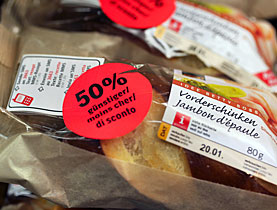 Swiss retailers are shooting themselves in the foot by increasingly reducing the price of goods on the shelves in an effort to undercut each ... 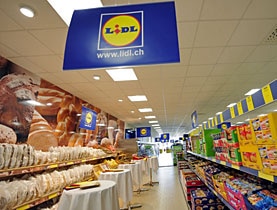 Lidl touchdown to have "more impact" than Aldi

The arrival of German discount supermarket chain Lidl in Switzerland on Thursday is expected to create more waves than its rival Aldi in 2005. ...

The world-famous Emmental and Gruyère cheeses come from a sandstone cave. Deep under the rocks, 50,000 cheeses are left to ripen for more than ...

The Lavaux vineyards have been part of the Unesco World Heritage Programme since 2007. It’s a tribute to the unique interaction here between man ...