Could geodesic dome suites, or other unusual accommodation, be the answer to the woes of the Swiss hotel industry – suffering under the weight of the strong Swiss franc and the perception that they offer poor value for money?

Perched on a hillside with views of the mountains and Lake Geneva, Whitepodexternal link is located in the Valais village of Les Cerniers. The eco-luxury resort consists of 15 dome-shaped tents – each with an en-suite bathroom and terrace. In exchange for the exclusive digs and sweeping views, guests have to trek a bit for meals and spa treatments.

Some Swiss hotels, like Whitepod in Valais, are trying to sustain high occupancy by offering something unique all year.

Attractions include private ski slopes, the chance to go mushing and ample hiking trails. For those in need of a business retreat, there are also conference facilities for groups of up to 30. Occupancy rates are excellent: about 85% in winter, and 65% in summer. (The national average is about 50%.)

Rates start at CHF420 ($429) per night for a “family” pod accommodating parents and two or three children. General Manager Emilien Sommier says the price is justified thanks to the level of service and the extras like tea-time and sporting gear.

“At Whitepod we’re like a five-star hotel. We have one staff member per pod; there’s a very high level of service. We know it’s expensive, but that’s the price of the experience.”

At the start of the year, Swiss hoteliers braced for the worst when the national bank scrapped the franc-euro exchange rate ceiling – making Switzerland an even more expensive island in the middle of the eurozone. Indeed, compared to 2014, the first half of 2015 saw a small decrease (0.6%) in room sales for Swiss hotels – with about 2% fewer foreign guests.

In July, however, sensational weather helped spark a 3.7% increase in overnight stays – with 145,000 more rooms booked than in July 2014. In addition, foreign demand went up 3.5%, according to the Federal Statistical Officeexternal link. But August saw the very opposite results, with a 3.6% decrease in overnight stays (-152,000) and 5% fewer foreign guests compared with the previous August.

Over the past decade, Switzerland has been struggling to fill its hotel rooms. Between 2009 and 2011, overnight stays dropped by nearly 5% and fell another 2% in 2012 – before going up 2.5% the next year.

In a tweet, Switzerland Tourismexternal link Director Jürg Schmid pointed out that mainly city and tourism hotspot hotels had profited from July’s good business, while many mountain hotels had not.

As Schmid told swissinfo.ch at a recent tourism conference, “If you can’t be cheaper, you have to be better. We have to invest in quality.” It’s a familiar refrain from Schmid.

“People who visit Switzerland know that it has a price, but they expect top quality.”

Switzerland Tourism acknowledges the fact that Swiss hotels could do better in terms of hospitality.

“In international guest questionnaires, Switzerland doesn't get bad marks, but unfortunately, it doesn't get above-average marks either," writes Switzerland Tourism in an introduction to its Prix Bienvenuexternal link hospitality prize – awarded annually to remarkably hospitable hotels.

For hotels and restaurants that want to better themselves, the Swiss Tourism Federationexternal link has a quality programme.

“The aim is to improve service quality in Switzerland. We don’t rate hotels. We give them tools to improve their service,” according to spokeswoman Chantal Beck. Her federation provides materials and training courses. They focus on various topics, like reservation procedures and complaint management.

“The difference between star categorisation and us is that we’re checking the ‘software’ – the service quality – not the infrastructure. So we won’t check how big the rooms are, but rather how friendly the staff are, how clean it is, how easy it is to get information and book,” Beck explained.

Depending on the level, hotels spend anywhere from two months to a year getting their Q, QQ, or QQQ label – which is valid for three years. About 700 of Switzerland’s 5,000 hotels and hostels participate. Whitepod isn’t among them; instead it’s a member of the Swiss Hotel Association and has a “certificate of excellence” from TripAdvisor.

“The label itself isn’t very well-known with international guests. It’s not something they ask for,” admits Beck. “Our goal is that the guest should just feel it.”

Rory Byrne, founder of London-based luxury tour operator Powder Byrneexternal link, feels that Swiss hospitality has improved greatly over the past few decades. But he still has his beefs.

“Hotels spend too much money in the wrong areas, such as massive infrastructure like spas, but they don’t bother with the bedrooms. To me the bedrooms are important, and it doesn’t need to be expensive to have a good room,” Byrne told swissinfo.ch.

The Swiss Hotel Associationexternal link counters that hotels and restaurants have invested quite a bit in renovations and maintenance in recent years: CHF643 million in 2012, CHF668 million in 2013 and CHF676 million in 2014.

“Association members are inspected every three years, and that includes checking their condition. In Switzerland the level of quality is comparatively high,” Thomas Allemann, executive board member of the association, said.

“But the renovation programmes are too slow – a lot of luxury hotels have inconsistencies in their rooms. Some are very good and some are very poor,” insisted Byrne, whose clients expect the best accommodation available.

As Allemann told swissinfo.ch, complete renewal – all in one go – is seldom feasible. “Due to financial resources, renovating rooms is an ongoing process. So it can happen that some of the rooms have already been updated while others haven’t.”

“At Whitepod we don’t need a big spa. It’s enough to have a sauna and a treatment room,” said Sommier, noting that they had invested in very good mattresses, instead. “The most important thing is that the night has to be comfortable.”

All the bedrooms are nearly identically outfitted with woollen blankets, sheepskin rugs and wood stoves. Guests who want a TV, coffee machine or Wi-Fi pay more for a “deluxe” pod. When it first opened in 2004, Whitepod was located in Villars in canton Vaud. Back then, there were no en-suite bathrooms; instead, guests had to venture into the snow and darkness.

Today’s Whitepod is more comfortable, but the original focus on ecology is still there. Energy efficiency is a priority, and the individual pods require less power than a conventional hotel building. The firewood is local, and all paper products are certified by the Forest Stewardship Council.

And then there’s the food.

“We source our meat, cheese and produce from nearby farmers,” Sommier noted, adding that the wine is local as well. The water comes from a spring.

It seems Whitepod has struck a winning balance. Guests are drawn to the unusual Alpine experience and the high standards – in a setting that lets them stretch their legs without leaving too much of a footprint.

Tourism bosses have warned that the Swiss tourism industry is facing a “serious” situation, already feeling the effects of Swiss National Bank’s ...

The “Grand Tour” of Switzerland takes in dozens of natural and cultural highlights, but how marketable is it, and will it appeal to visitors? 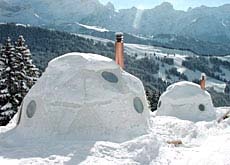 Imagine spending the night in a dome-shaped tent high on a mountainside in the middle of winter and paying a small fortune for the experience. ...