The state of Switzerland is based on the principle of federalism. Federalism in this case means that the member cantons retain a large degree of autonomy.

Federalism has been of central importance in the governance of Switzerland since the founding of the modern state in 1848 and its special place is enshrined in the constitution.

The federalist state structure affects everything, as anyone who has been to school in Switzerland can confirm. What's known as gymnasium in one canton is called cantonal school in another, making comparison between the cantons confusing.

The same diversity can be seen in the political system. While canton Bern has a Government Council, canton Fribourg has a State Council. The different names are just one manifestation of the federalist state structure.

The cantons, and similarly the communes, enjoy a high degree of responsibility for their own affairs. Only those tasks which communes and cantons are unable to carry out are delegated to the next higher level.

Switzerland also has 26 different codes of procedural law. Curiosities like these lead some people to poke fun at federalism, deriding it as "Kantönligeist", or little canton mentality. However federalism as a core principle in Switzerland is sacred and the cantons zealously guard any attempts to limit their freedom.

The opposite of a centralised state

The term federalism comes from the Latin "foedus", which can be variously translated as state, alliance or treaty. Because there is no unique definition of federalism, it can be applied in various ways, such as the organisational principle of a state, a political approach or programme.

In general usage federalism is understood to mean the organisational principle of a state. Examples of federal states in Europe are Germany, Austria and Russia. The opposite of a state based on the federalist model is the centralised state.

In these cases the member states are often only administrative districts, dependent on the directives of the central government, with comparatively little autonomy. France, Italy and Sweden are examples of centralised states.

The experience of civil war

Federalism as a political maxim and dominant organisational principle is enshrined in the Swiss constitution. Article 3 states that "the cantons are sovereign insofar as their sovereignty is not limited by the federal constitution; they shall exercise all rights which are not transferred to the confederation".

However, the term itself is not specifically mentioned in the constitution. Viewed historically, federalism is a product of the conflicts that preceded the founding of the state in 1848. In the civil war, the pro-centralisation liberal cantons overcame the conservative Catholic cantons, which were defending the sovereignty of the cantons.

Despite this victory, the constitution of 1848 was a document of appeasement, representing a compromise between the centralist and federalist approaches and placing emphasis on both the autonomy and independence of the cantons.

Federalism is by no means immutable. While the basic principle is sacred, the practical division of responsibilities between the confederation and the cantons is still a topic for discussion. The issue of federalism continues to simmer in Swiss political debate.

Since the partial revision of the constitution in 1874 a "creeping loss of cantonal sovereignty" can be observed, historian Christian Sonderegger writes in the publication series "Aktuelle Schweiz". He goes so far as to say that federalism is clearly under threat today. In his opinion, the cantons increasingly see themselves only as administrative organs of the state.

The borders of the cantons, in other words the territorial integrity of individual member states, is also in question. Until now voters have not approved any merger of cantons. One proposal, the union of cantons Geneva and Vaud, was rejected at the ballot box. But one step lower at communal level, mergers are taking place. Whether such fusions will necessarily lead to a loss of autonomy remains to be seen. 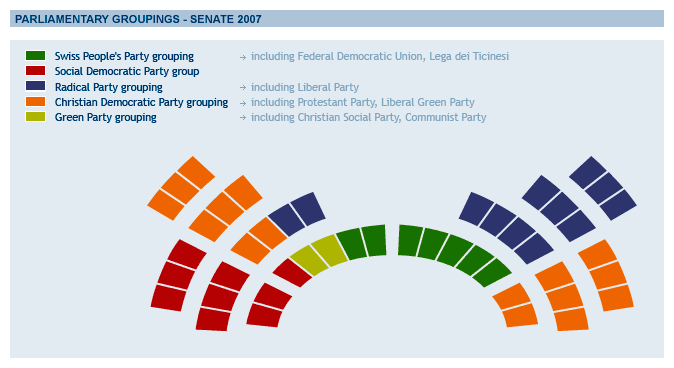 Distribution of seats in the Senate

The Senate has 46 members, two per "full" canton and one for each of the "half" cantons – Basel Country, Basel City, Nidwalden, Obwalden, ...

Women in the Senate

Less than a quarter of members in the Senate are women – just 10 out of 46. 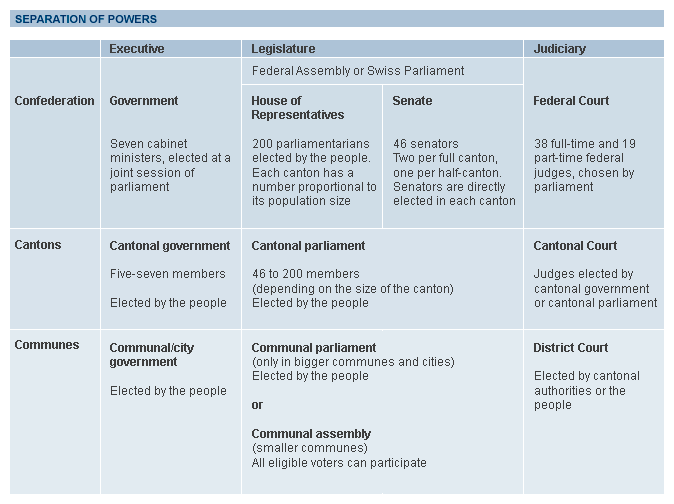 Separation of powers means how power is distributed horizontally and vertically among several actors. Horizontally this covers the executive, ...