Swiss Federal Railways has accused Apple of stealing the design of its iconic clock. The clock icon that appears on the new iPad operating system looks just like the timepieces that grace Swiss train stations. The rail company is now seeking financial compensation.

“On the one hand we’re happy that Apple adopted the Swiss railway clock. It just goes to show that it is truly a design piece,” railways spokesman Christian Ginsig told the German-language Blick am Abend newspaper on Thursday. However, he pointed out that Apple’s use of the design was unauthorised.

As the owner of the clock’s trademark and copyrights, the Swiss Federal Railways will now take legal action against the computer, phone and tablet maker.

Apple’s new mobile operating system iOS6 was introduced early on Thursday morning. The Swiss station clock now appears on the iPad to represent its first internal timekeeper, which can also serve as an alarm clock.

The Swiss branch of Apple was unable to comment on the issue. The Swiss railway clock was created in 1944 by Swiss electrical engineer and designer Hans Hilfiker.

Thousands of people have gathered online and at locations in the United States and Switzerland to learn about the creativity of Swiss inventors in ...

Harnessing the potential of tablet technology

A year after Apple released its iPad, Swiss media groups are still grappling with how best to harness its potential. As free online newspapers ... 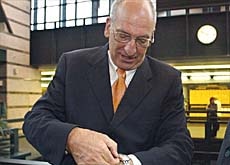