Switzerland has welcomed the draft treaty to ban cluster bombs adopted by more than 100 states meeting in the Irish capital, Dublin.

The accord has also been hailed by the Swiss-run International Committee of the Red Cross, which described it as a major step forward for the protection of civilians.

However, the Swiss defence ministry said it regretted that the major producer countries of the bombs, including the United States, Russia, China, India, Pakistan and Israel did not attend the meeting.

The head of the Swiss delegation at the talks, Ambassador Christine Schraner, described the Dublin result as a "decisive step".

She said Switzerland had made "necessary concessions" and that the convention would improve international humanitarian law.

The agreement, reached on Wednesday evening after ten days of talks, outlaws the use, production, transfer and stockpiling of cluster bombs.

It also includes a commitment to remove cluster bombs from national arsenals within eight years and to provide for the welfare of cluster bomb victims.

"We would have liked a document with more flexibility on deadlines so that the producing countries could have joined," commented the defence ministry's head of disarmament, Bernard Jeanty.

The ICRC said in a statement it was urging all states to adhere to the Cluster Munitions Convention in the near future and was calling on them to end the use of cluster munitions prohibited by the convention, regardless of whether they had participated in the Dublin negotiations.

"The ICRC has regularly witnessed the terrible impact of cluster munitions on civilians," commented ICRC President Jakob Kellenberger on Thursday.

"The convention adopted in Dublin means that these weapons are not only morally unacceptable but also now illegal under international humanitarian law. When implemented, it will prevent tremendous civilian suffering."

The ICRC first called for a cluster munitions treaty and an end to their use in 2000 following the conflict in Kosovo, where it documented widespread civilian casualties.

It said that unexploded cluster sub-munitions had rendered large areas as dangerous as minefields in more than 20 countries, adding that their deadly legacy could continue for generations.

The head of the Swiss section of Handicap International (HI), Paul Vermeulen described the accord as a "historic step", adding that all countries had made concessions.

According to HI, Switzerland has a stock of 200,000 cluster bombs of the M85 type. It is a so-called smart bomb that self-destructs and has a failure rate of between one and two per cent.

"Despite all the arguments which it has consistently put forward, Switzerland will not be able to keep its stock of M85 cluster bombs. The states meeting in Dublin made no concessions," Vermeulen said.

"We are witnessing a remarkable progress in international humanitarian law."

Switzerland has invested about SFr600 million ($572.9 million) in cluster bombs in recent years.

However, non-governmental organisations in particular have criticised a loophole in the treaty.

Under pressure from Nato countries, the text includes a concession to the US and other countries which want to continue to use and produce such munitions by allowing military cooperation between signatories of the accord and non-signatories which still use cluster bombs.

Article 21 of the agreement would, for example, permit British troops to call in US air support that might include planes dropping cluster bombs, although British forces would not themselves use them.

"The whole thing is like a Gruyère cheese -- it's completely full of holes," said Nigel Inkster, an analyst at the International Institute for Strategic Studies in London.

The 111 states meeting in Dublin approved the draft text on Friday, the final day of the conference. It is due to be signed in December in the Norwegian capital, Oslo.

It will enter into force when 30 states have deposited their instruments of ratification with the United Nations secretary-general.

Cluster munitions are large weapons deployed from the air or launched from the ground that release dozens or hundreds of smaller submunitions.

Those deployed by aircraft are most often called bomblets, while those launched from the ground are usually referred to as grenades.

Their wide-area effect nearly always causes civilian casualties when they are used in populated areas.

Many of the submunitions do not explode on impact as designed, causing civilian casualties for months or years to come.

It adds that the weapon caused more civilian casualties in Iraq in 2003 and Kosovo in 1999 than any other weapon system.

Also known as the Oslo process, the Cluster Munitions Process was launched in February 2007 when a group of 46 states agreed to the Oslo Declaration.

This committed them to "conclude by 2008 a legally binding international instrument that prohibits the use and stockpiling of cluster munitions that cause unacceptable harm to civilians and secures adequate provision of care and rehabilitation to survivors and clearance of contaminated areas". 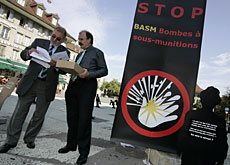 Campaigners fighting to outlaw cluster munitions in Switzerland say a partial ban approved by both houses of parliament does not go far enough. ... 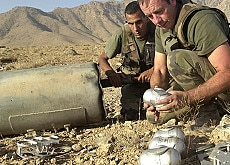 Nearly 70 countries including Switzerland have pledged support for an international ban on cluster bombs, but still don't know how to implement ... 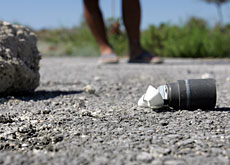 Forty-six nations including Switzerland have adopted a declaration in Oslo calling for a 2008 treaty banning cluster bombs. Swiss officials ...