The Swiss finance minister and his German counterpart appear to have smoked a pipe of peace to end months of spats over Swiss banking secrecy.

Hans-Rudolf Merz, who in addition to holding the finance portfolio is also this year's Swiss president, had talks and a private dinner with Peer Steinbrück in Berlin on Monday, at which he assured the German side that Switzerland was ready to provide assistance on tax evasion cases.

The talks came on the eve of a meeting of 18 finance ministers from the countries of the European Union and the Organisation for Economic Co-operation and Development, called by Steinbrück and his French counterpart, Eric Woerth, to discuss ways of combating tax fraud.

Steinbrück has aroused much anger in Switzerland over recent months by various comments about the country's banking secrecy, most notably in March when he said the Swiss were like "Indians" running scared at the sight of the US cavalry.

"It was high time to come face to face and to ease the tension," Merz said after the meeting. He added that it was important for the two neighbours to restore friendly and constructive relations.

Merz assured the ministerial meeting on Tuesday that Switzerland was no tax haven.

It had already renegotiated six agreements on double taxation since March, when the government revised its position on providing information to foreign countries about suspected tax cheats, he pointed out.

He added that Switzerland wants a transparent monitoring process to oversee the way in which information about suspected cases of tax evasion is exchanged, and stressed that states where bank deposits are held and those where the account holders are resident share responsibility for cooperation over such matters.

At a media conference afterwards both Merz and Steinbrück appeared relaxed and satisfied.

"I am returning to Bern with the conviction that from now on Switzerland will be included in all procedures to do with the fight against tax evasion," Merz said.

Earlier this year Switzerland – despite being an OECD member - was not consulted when the body placed it on a "grey list" of tax havens, considered to only partially respect the organisation's criteria in tax matters.

Steinbrück said he was pleased with the results of the finance ministers' meeting, which had shown that about 40 states had now adopted the standards set out in the OECD model tax convention for exchanging information about suspected tax evasion.

He said they had adopted a "remarkable communiqué", which had been supported by Switzerland, Austria and Luxembourg, all of whom figure on the OECD grey list.

In the communiqué, states are encouraged to take sanctions against countries which do not implement the OECD standards on exchange of information. Steinbrück stressed that it was up to each country to decide for itself which sanctions it would take, but the aim was to achieve "unison" in this matter.

Possible measures include an increase of withholding tax, or the termination of treaties with countries that refuse to adopt an effective policy of providing official assistance.

The communiqué also calls for the international community of nations to work together in a new, enlarged "Global Forum", which would monitor the implementation of the OECD standards in a transparent and non-partisan fashion.

"The communiqué marks the start of a new phase in the fight against tax evasion," Steinbrück said.

Germany and Switzerland are to hold further exploratory talks about a possible new double taxation agreement on July 13, when they will decide whether to embark on official negotiations on the issue.

However, Merz made clear that there would be no automatic exchange of information. Bern would fulfil its obligations, but any requests made for information would still have to be well founded, he said.

He pointed out that while the Swiss were willing to proceed speedily, no new treaty could come into force before it had been approved by both houses of the Swiss parliament.

He warned that treaties which include major new obligations could also be subject to a referendum. It would be up to parliament to decide on this in the autumn.

Paola Cerega in Berlin, swissinfo.ch and agencies (Adapted from German by Julia Slater)

The key issue in double-taxation negotiations is Article 26 of the Organisation for Economic Co-operation and Development Model Tax Convention on Income and Capital.

In layman's terms, the document sets the framework for when investigators can ask a foreign state for information when building a case against suspected tax cheats. The article requires that investigators "demonstrate the foreseeable relevance of the requested information".

Article 26 was updated in July 2005 to say a state cannot refuse to provide information because it is held by a bank. Although its authors say the document is not incompatible with banking secrecy laws, Switzerland expressed reservations in July 2008.

In March 2009, Switzerland withdrew its objections when faced with being blacklisted by the OECD.

In October he and his French counterpart, Eric Woerth, called for Switzerland to be blacklisted by the OECD as a tax haven.

In March he aroused Swiss fury by comparing the Swiss to Native Americans running scared of the US cavalry.

The German ambassador was summoned to the foreign ministry to hear a protest.

One Swiss member of parliament said Steinbrück's tactics reminded him of the Nazis.

In May Steinbrück compared Switzerland and other countries on the "grey list" to Burkina Faso, which the World Bank named as the least favourable in Africa to investors.

Later that month a group of Swiss parliamentarians met him and had what they called "conciliatory" talks. 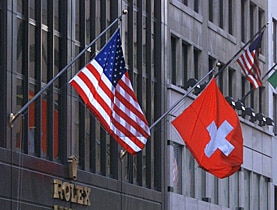 US and Switzerland agree to new tax treaty

Switzerland and the United States have agreed in principle to a revised double-taxation accord, designed to meet international standards on the ... 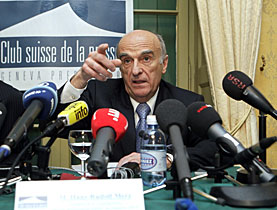 Finance Minister Hans-Rudolf Merz has issued the strongest hint yet that Switzerland might change its view on tax evasion in order to preserve ... 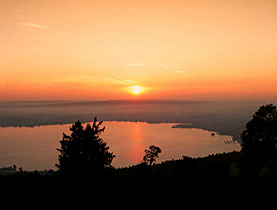 The Swiss government has reacted angrily to a stinging attack on its banking secrecy laws by the German and French finance ministers. Following ...