The Swiss continue to distance themselves from organised religion, with religious communities forced to compete with secular leisure activities and rely on church marketing activities, according to a study.

As part of the National Research Programme “Religions, the State and Societyexternal link”, sociologists of religion from Lausanne and St Gallen have gauged the religiosity and spirituality of people in Switzerland. The final report, the most comprehensive study of this topic to date, is now available as a book in Germanexternal link.

The researchers subdivided the Christian religious and spiritual landscape into four basic types with very different conceptions of belief: more than half of the population (57%) keep religion at a distance, a figure they expect will continue to grow.

Only around a fifth of the population (18%) are still regular consumers of institutional religion. Within this group, the Catholic and Protestant core congregations are dwindling, while the charismatic free churches are gaining ground.

Adherents of alternative forms of religiosity have remained stable (13%), but the researchers expect that the secular group (12%) will grow much larger in the long term.

The findings support previous conclusions, reported by swissinfo.ch, that not only are the main established churches in Switzerland haemorrhaging members, but that most of those who stay within the fold have at most a superficial attachment to the church.

The researchers found that more and more Swiss are making up their minds what to believe and what to practise.

The religious realm is thus coming under increasing competitive pressure because individuals are free to choose between religious and secular offers, both of which they judge in terms of value for money. This consumerist attitude has become prevalent in Switzerland since the 1960s, say the researchers.

The main rivals are secular pastimes that can supplant religious activities. When children and teenagers play football at weekends instead of attending Sunday school, this hampers their religious socialisation.

Nevertheless, religions are being viewed more critically and with greater detachment today than in the past, the researchers conclude.

Thus 85% of the respondents were fully or largely of the opinion that, in view of current world events, “religions are more likely to result in conflicts than in peace”.

For whom toll the bells? Church bells charm and annoy their listeners

Swiss church bells tell time, call people to prayer, and irritate some – leading to disputes over whether they should be silenced.

Religion is becoming less important in people’s private lives in Switzerland, even among tax-paying members of the Roman Catholic and Protestant ...

Empty pews One in four shuns religion in Switzerland

The role of organised religion in Switzerland is an increasingly small one, according to a publicly funded study. Through hundreds of ...

Swiss-British author and popular philosopher Alain de Botton has attempted to conquer some of life’s great themes, including religion and atheism. 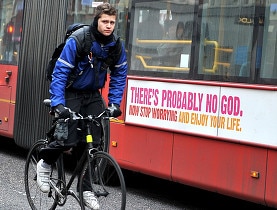 "There's probably no God. Now stop worrying and enjoy your life." That message, on British buses for just over a month, is coming to Switzerland. ...