Roma children who beg and steal in Switzerland are not offenders but rather victims of human trafficking who need better protection, says a report.

Putting these recommendations into practice, Bern has rid its streets of underage foreign beggars and now other Swiss cities are looking into following the capital’s example.

Some people are irritated by beggars, others have sympathy for them – both are the wrong reaction when it comes to organised begging, according to Reto Nause, responsible for security in the city of Bern.

“Behind the beggars hide cold-blooded criminal organisations,” he told swissinfo.ch.

“These children are in all likelihood victims of human trafficking. It’s a huge problem and we have to protect them.”

To this end, the Association of Swiss Cities, the city of Bern and the Swiss Coordination Unit against Human Trafficking have drawn up a package of measures and recommendations for the authorities.

Their report, written with the Conference of City Police Directors, was partly based on Bern’s Agora Project (see box), considered a pioneering effort in the struggle against organised begging and petty crime.

“Until now, the treatment of foreign children and teenagers who beg has been inadequate,” admitted Martin Tschirren, deputy head of the Association of Swiss Cities, adding that simply moving underage beggars on did nothing to solve the problem.

One of the report’s central points concerned perspective: underage beggars or thieves – who, it said, are mostly Roma from Romania or Bulgaria – should not be seen primarily as offenders, but rather as victims.

Since the extension to the free movement of people agreement between the European Union and Switzerland came into force on June 1, 2009, Romanian and Bulgarian citizens have had the right to spend up to three months in Switzerland without a visa or permit, which makes it difficult for the authorities to monitor and apprehend transient beggars.

What’s more, when children are arrested for begging, they are soon released without punishment on account of their age.

Also, the situation in Switzerland differs from canton to canton. Begging in Bern is not illegal but foreigners are required to have the means to support themselves when they enter the country, which means they can be fined for begging. Other Swiss cities, such as Zurich and Basel ban begging outright.

In 2009, a small number of Geneva policemen took the law into their own hands, writing the word “beggar” in the passports of mainly Roma people they caught begging. This practice, described by city bosses as “totally illegal and totally unacceptable”, has now stopped.

Boris Mesaric, head of the government’s coordination unit against human trafficking, talked of the need for a “new mindset”.

“Until now we’ve faced the problem as a problem of begging and stealing, and the new mind-set means viewing these people not as offenders but as victims of human rights violations – and as victims of human trafficking they have the right to support,” he told swissinfo.ch.

These “controllers” often buy the children from their families and then train them in begging and stealing before sending them to work in various countries, Mesaric said.

“If the children don’t earn enough money, they receive punishments such as being beaten, getting locked up or having their food taken away,” he said.

According to the report, the ideal situation would be for the voluntary return of children and teenagers to their countries of origin and reintegration into society.

As part of Agora, the city of Bern reserved places for young beggars in a specialist care home, where they were educated until the authorities could sort out their return. If their own family wasn’t in the position to take them back, they were placed in the care of guardians.

Although child begging has disappeared from Bern, Mesaric said it had become a recurrent theme in Geneva, Lausanne, St Gallen, Basel and Lucerne.

He denied, however, that Switzerland was affected more – or less – than other western European countries, pointing to similar problems in Spain, Italy – “even France and Germany”.

“I wouldn’t say Switzerland is a main target [for beggars from Bulgaria or Romania], but we have to be prepared in case something changes and more come. That’s why it’s important for us to observe the situation and study this method of dealing with the problem,” he said.

“The main challenge is for all the authorities in Switzerland to see this as a problem of human trafficking.”

In response to an influx of foreign beggars, including children and disabled people, Bern aliens police in April 2009 launched the Agora pilot project to try to combat the gangs organising the begging.

According to the police, three-quarters of the newly arrived beggars were Romanian or Bulgarian. The remainder were from Poland and Slovakia.

Bern aliens police cooperated with the relevant authorities abroad as well as the city authorities on the project, which involves covert surveillance of the beggars to determine how they work and who is pulling the strings.

It is known that the gangs have mobile phones and street maps, marked with begging hotspots, and well-dressed minders keep an eye on young and disabled beggars.

As soon as the begging cup is half full, runners come to collect the money and change it into notes.

At the end of the day the beggars are picked up from meeting points on the outskirts of the city.

Over the duration of the project, the police stopped and checked a total of 638 foreigners, of whom 69 were unaccompanied children.

Beggars will find it increasingly hard to get handouts on Swiss streets as one by one towns and cities tighten up regulations. Lausanne is the ... 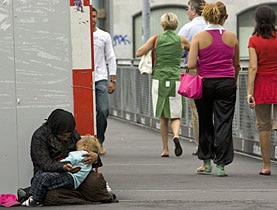 The Swiss capital Bern has become a magnet for organised begging, with beggars being drafted in from eastern Europe to work the streets, city ...

"We in Switzerland have a real poverty problem"

Switzerland’s first national conference on poverty has highlighted the fact that more needs to be done to combat the phenomenon at home. In an ...

Human rights are universal and unalienable. The charter of the United Nations, founded in 1945, aims to promote the respect and implementation ...

Crackdown on Roma using children to beg. The authorities in Geneva have increased protection for children who are made to beg on the streets, a ...